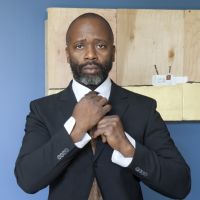 Theaster Gates was born in 1973 in Chicago, where he lives and works. He exhibits widely, including group shows such as the Whitney Biennial, New York; dOCUMENTA (13), Kassel; ’The Spirit of Utopia’ at Whitechapel, London; and Studio Museum’s ‘When Stars Collide’ in New York. Solo exhibitions include ‘To Speculate Darkly: Theaster Gates and Dave, the Slave Potter’ at Milwaukee Art Museum; Seattle Art Museum; MCA Chicago; and ‘The Black Monastic’ residency at Museu Serralves, Porto. Gates was awarded the inaugural Vera List Center Prize for Art and Politics, and the Artes Mundi 6 prize. Gates is founder of the nonprofit Rebuild Foundation and Professor in the Department of Visual Arts, University of Chicago.