Next American City is launching the Storefront for Urban Innovation this spring. Executive Director Diana Lind writes about how the organization hopes to broaden its audience and increase its impact with this new experiment.

Pardon our dust. We will install our first mini-exhibition in two weeks. Full exhibitions will launch in late February.

Last year while I was a fellow at the Van Alen Institute (VAI), I had the fortunate opportunity to watch the creation and opening of Van Alen Books. VAI Director Olympia Kazi created the bookstore after numerous closings and consolidations left New York City without an architectural bookstore. Kazi seized the opportunity and using the ground level space of a building owned and partially occupied by VAI, she, along with curators and a design by architecture firm LO-TEK, transformed the tiny storefront into a pint-sized bookstore and discussion space. It’s become a hotbed for discussion and has given VAI a greater presence in the city’s heady architecture scene. 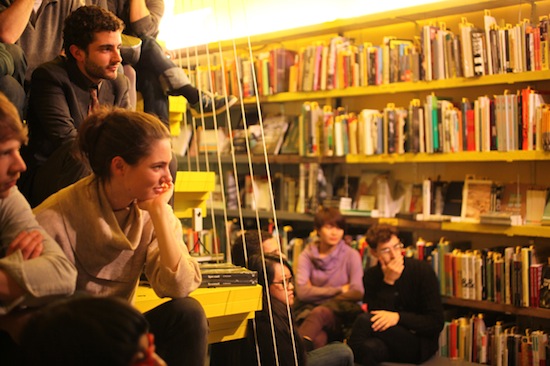 Listeners at a Thom Mayne lecture at Van Alen Books.

When I came back to Next American City, I knew that this time the organization had to do a number of things differently. As you know, we are transforming our content to go fully digital, but I wanted to change more than the kind of material we were producing. I wanted to change the audience for it. One of the things that has always bothered me is the echo-chamber of the urban policy and practice set. Too often we only listen to each other, too often we share ideas only with those who will be receptive to them. Van Alen Books and numerous other projects like it, such as the Storefront for Art and Architecture or public art projects in cities ranging from Windsor, Ontario to Syracuse, New York, taught me that ideas spread quickly when they are out in the public domain. Would it be easier to spur economic development, reform our failing school system, tear down urban highways or create greener infrastructure, if a broader swath of the public was engaged in the dialogue about these issues? 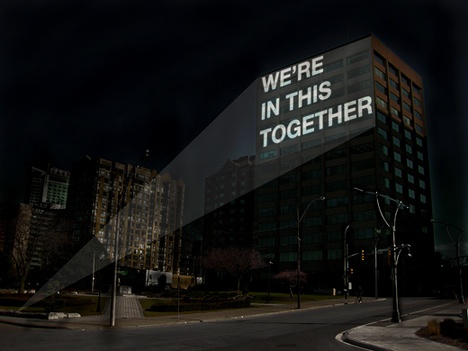 A project by Broken City Lab, based out of Windsor, Ontario.

Next American City has found that its audience is fairly homogeneous. An astonishing 99 percent of our readers have college degrees (compared to the national average of 30 percent). Many more are affluent professionals in a select group of fields such as planning, architecture, philanthropy and the nonprofit sector. There’s nothing wrong with attracting smart, talented professionals in our multi-sector field, but it does seem problematic to be writing for them alone. How will we know what kind of cities will best serve the general population if we are only concerned with the perspectives of a very select group?

In an effort to broaden our audience and expand the circle of people who are participating in the dialogue about our cities, Next American City is launching something called The Storefront for Urban Innovation. The Storefront will serve as our offices, an exhibition space and a host for small and medium-sized events. We’ve located our storefront in the Brewerytown section of Philadelphia on West Girard Avenue. This neighborhood, like many others in the city, is often described as having “seen better days.” Many of its storefronts are closed or open only sporadically. The neighborhood lacks the basic amenities of a supermarket, bank, post office or school. And abandoned houses, vacant lots, stray kittens and trash are common features of the streets just north of our office. But on the other hand, there is a coalition that has installed new colorful trashcans that have cleaned up the street. A developer, MM Partners (disclosure: our landlord) has helped revive the area by bringing Mugshots Café, a bike shop, and infill housing to the neighborhood. And many people who lived further south but are seeking cheaper rent are now populating the area, rehabbing buildings formerly in disrepair. This location that bridges gentrification and stagnation at the same time is not incidental; it is a perfect perch to watch and participate in the direction of the community. 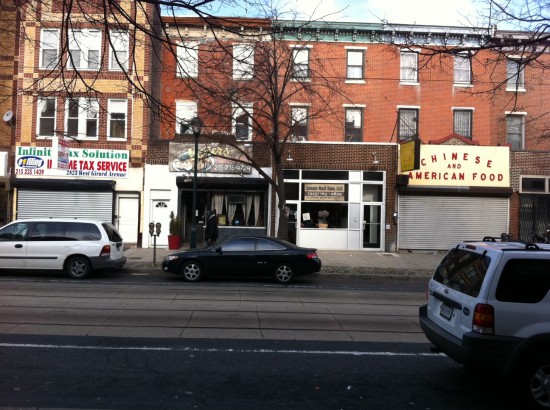 The view across the street on West Girard Avenue.

But we don’t want to suggest that the Storefront’s purpose is to engage the Brewerytown neighborhood alone. On the contrary, we want the Storefront to bring exciting ideas for improving cities from around the world to all of Philadelphia. By creating panel discussions, lectures and exhibitions that build off our forthcoming content, we will build a more robust dialogue about issues such as infrastructure, the built environment, the economy and education. We hope that this will help build urban policy literacy among a broader constituency in Philadelphia, put Philadelphia on the map as a key laboratory for urban policy and practice, and ultimately better empower people to elect better officials, call for improvements to basic aspects of urban life, and create a more sustainable economy.

Right now, 2816 W. Girard Ave is filled with moving boxes and some IKEA furniture. But in a few weeks, we’ll be opening our doors and hope you will stop by, bring your friends, ask to give a talk here or exhibit your ideas in our storefront window.