This year’s Venice Biennale for architecture includes a floating pool with a homely past of docking alongside a neglected part of the Bronx.

A public pool built into barge, floating on a Brooklyn waterfront, proved a novel way for local children to have some fun this summer. So much so that the project has just been chosen to represent the best of our country’s design innovation in the American pavilion of the upcoming Venice Biennale. 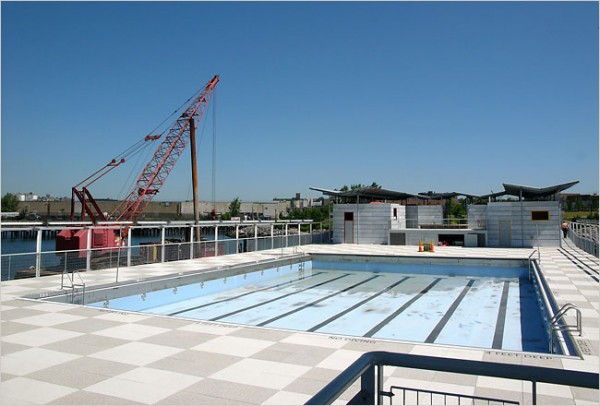 But what may strike the global art-eratti in Venice as most interesting about the idea of a floating pool is that it isn’t that new a concept. Over 100 years ago New York’s waterways were home to some 15 such barges. Nineteenth-century city officials put them in place as a reaction to an exploding immigrant population’s penchant for dangerous and unsightly public bathing, and the nation’s growing obsession with personal hygiene (“clogged skin” was thought to lead to immorality and business failure, among other social ills). The pools’ contemporary counterpart reacts to more current obsessions of the urban-minded: it bills itself as promoting exercise in low-income communities plagued by asthma, increasing public engagement with the city’s ever healthier waterfronts, and a present-ing of urban history

“The Floating Pool Lady,” as the barge is called, is the brainchild of urban planner and amateur historian Ann Buttenwieser who has been trying to get the project off the ground for the last 27 years. With the help of architect Jonathan Kirschenfeld, it finally came to sleekly designed fruition in 2008.

Buttenwieser’s plan is to build more such pools, with different architects, and to mobilize them all around the New York and New Jersey area. With its initial success in Brooklyn and upcoming high-profile international exposure, it looks like the idea’s time may have finally come, again.