When New Orleans’ mayor Ray Nagin predicted that Hurricane Gustav was going to be the “mother of all hurricanes,” he urged the city’s residents to get out of town or make one of the biggest mistakes of their lives. Writer Ariella Cohen stayed — and here’s what happened.

My power is back on. Outside my house, men in hardhats are lifting storm-downed tree limbs from the streets. The only person I’ve seen in the neighborhood in days is one I had never seen before, an older man who limped to my porch asking for a cigarette to hold him over while he waited, he said, for his own electricity to return. 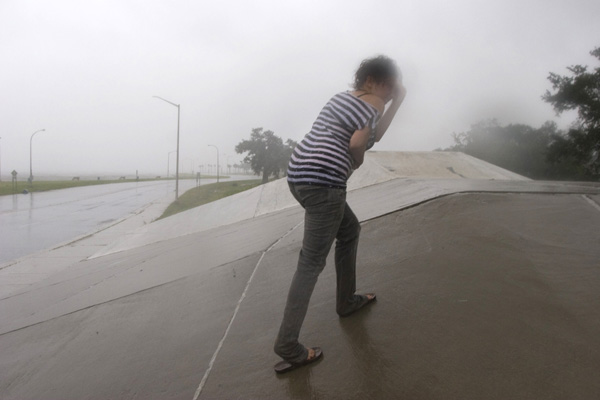 The author, battling the wind. Photo by Andy Levin.
This landscape of repair is obviously nothing new here in post-Katrina New Orleans. And thankfully, this latest tango with Mother Nature was a mild one. While last night at a jammed French Quarter bar, I overheard one intoxicated, self-described “vulture-journalist” confess disappointment at Gustav’s relative timidity, most of us are thankful for a major disaster averted.

I spent the morning Gustav hit watching storm surge overtop the levee that protects the Upper Ninth Ward from the Industrial Canal. With every wave that pounded against the cement wall, more journalists and army-types gathered above on the Claiborne Avenue Bridge. A few braver souls snapped photographs or jotted notes on the muddy maze of cement and railroad track that surrounds the levee, remembering the last time, three years ago the Industrial Canal levees were tested on the Lower Ninth Ward. Then, they failed when a loose barge rammed into them. This time, another barge had come loose in the canal, tempting fate once again. A friend of mine, photographer Andy Levin, who was with me, as water cascaded over the concrete wall, described the situation succinctly. 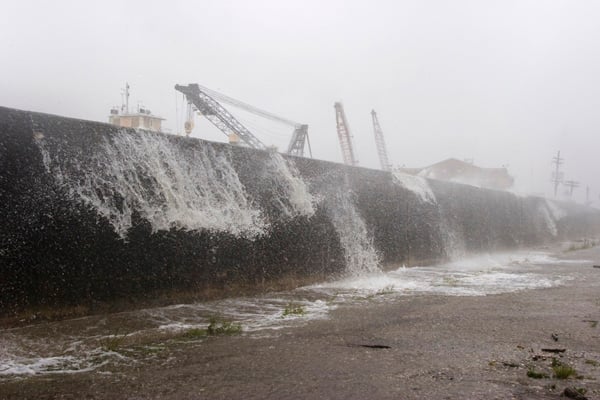 A levee wall. Photo by Andy Levin.
“If the wall breaks, we ain’t getting out of here.”

Gustav was my first experience with a hurricane. I didn’t evacuate mostly because I could not imagine the city being decimated again. I asked myself, if this bowl of a city flooded again, who would rebuild. Because I couldn’t fathom New Orleans being sucked out of existence, I stayed to see it survive.

The storm itself happened quickly. I woke up at 5 am to a roaring sky, opened the door of the apartment where I was staying, a century-old brick house built on the high ground of Esplanade Ridge, and felt spitting 75 mile-per-hour gusts on my face. The electricity was out. A friend and I stood in the loud outdoors. Occasionally, the gunshot-like boom of another generator blowing out punctuated the wind’s shriek. After the tumult abated, we drove, slowly, dodging fallen tree limbs, to the levee that protects the city’s Lake Vista section from Lake Pontchartrain. It was early in the storm and water had not even reached the green grass at the bottom of the earthen levee wall. Rigid against the wind and wet, we stood a few feet from the lake and watched squalls of white-foam waves crash against the seawall. On the way back to the car, a man dressed in a condom-like rain slicker, waved at us, his jacket, the color of mint gum, obscuring his face. He had just finished rebuilding a new house to replace the one he lost to the 2005 breach of the nearby 17th Street Canal. The new house was on high ground safe for riding out the storm. “I’m from here,” he said. “I like storms when they don’t destroy my house.”

I am not from Louisiana. Hurricanes freak me out. One day before Gustav, I tried to exorcise my anxieties by removing all my clothing from my closet, piling them on the couch and covering the mound in plastic sheeting I purchased from Home Depot in a frenzied spree of impulse emergency purchasing. That same pre-storm day I also bought six bottles of expensive Kombucha tea from Whole Foods, telling the friend I had deployed for this pre-crisis bout of superfluous consumerism that the “restorative” qualities of the traditional fermented tea would power me through the tough times ahead. The kumbucha shelf was nearly bare. It seems that I wasn’t the only one who thought the overpriced feel-good elixir would be of service if the city flooded again.

Now the storm is over. My electricity was on and now it is off again — they are telling me now that it will be back on for good tomorrow. I am dubious considering there are some 700,000 homes in the state that still lack power. Still, my clothes have been safely returned to my closet and neighbors are trickling home. 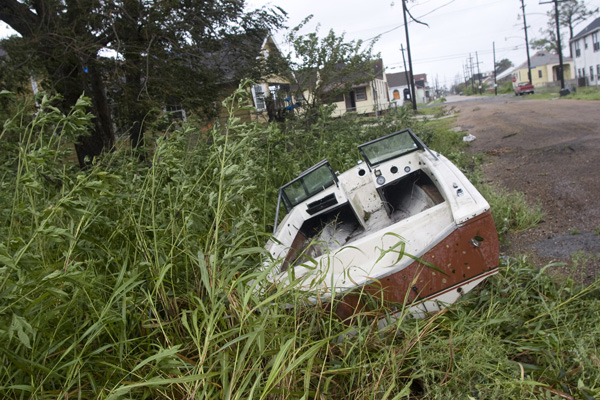 Photo by Andy Levin.
But as things slip back into the ancient, familiar patterns that keep this city ticking, it is important that the takeaway of the storm is not that New Orleans was spared, but that New Orleans nearly drowned again. In a somewhat ironic twist, Gustav hit Louisiana just hours before the world’s largest professional society for engineers issued a report explaining why “another ‘Katrina-like’ hurricane is inevitable.” 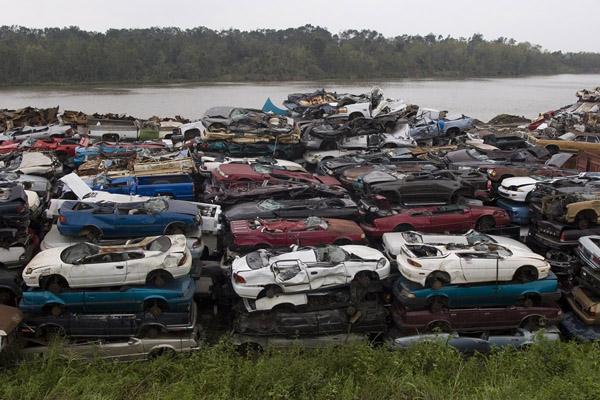 Photo by Andy Levin.
“While the region’s residents may be breathing a sigh of relief at Gustav’s near-miss, they should not allow a sense of false security to settle in,” the American Society of Civil Engineers’ external review panel wrote in a preface to the seven-page report. “The events of this week should shine an even brighter light on the need to continue improving the region’s hurricane protection system, including the incorporation of risk into the decision making process at all levels,” the letter said. The civil engineers’ report is one of many, pieces of evidence in the compelling case of the Gulf Coast v. Nature, a case where the guilty parties are vast and all are implicated. At a rate of between 50 and 200 square miles a year, this land we live on is sinking into the Gulf of Mexico. Two days ago, I went out to interview a family in Bayou Black, LA who lost its trailer to an oak tree that fell onto it during Gustav. On the drive back to New Orleans I crossed a bridge over one of the many bayous that crisscross the region. Between the four-lane highway bridge and open water loomed a mountain of scrap metal. A school bus bearing the name of a neighboring parish rested on a moss-covered pillow of junked cars, cracked oil barrels and crumpled tin roofs. All of it was waiting to be picked up by a barge belonging to Southern Scrap Recycling, one of the region’s biggest players in scrap metal and the same company that owns the barge that threatened to crash through the Industrial Canal storm wall. In some sections of the dump, the metal refuse appeared to be segregated by color, like life-sized, metal-leaching paint chips. We took a picture of the junkyard on the bayou and walked away. Which is, in essence, what policymakers have done here in Louisiana.