As certain cities across the country shrink in population, local governments are left with the task of demolishing hundreds of dangerous vacant properties. Without a national standard for contractors to follow, however, the process poses a significant health risk to the general public.

In 2011, the City of Baltimore’s Housing Department oversaw the demolition of more than 300 unsafe structures throughout the city, including a seven-acre demolition site on the city’s east side. In 2010, Detroit Mayor Dave Bing promised to demolish 10,000 of the city’s most blighted and dangerous properties before his term ends in 2013. And in Youngstown, Ohio, a shrinking population has left the city with 4,000 vacant structures, most of them slated for demolition.

What Baltimore, Detroit, Youngstown and an increasing number of U.S. cities with shrinking populations have in common is a problem Americans are unused to solving: How to creatively and safely deconstruct our cities. In places like Baltimore — which has lost a third of its population since 1950 and where, depending on who you ask, almost 20,000 properties sit vacant — this breaking down and reinterpreting of place is already happening.

Suggestions abound from artists and policy-makers alike. A 2002 Brookings Institute/CEO for Cities report highlights a number of plausible solutions to promote faster and better development of vacant properties, many of which we are now seeing implemented. Some of these solutions — like vacant lot revitalization programs, data visualization to increase transparency and creative financing strategies — are attempts to address the very complex problem that is urban redevelopment.

But in the haste to attract developers and their money, many cities have overlooked a most important and essential component of responsible redevelopment: Communicating the potential health hazards, necessary health precautions and contractor’s responsibilities to the people who live and work near a demolition site. 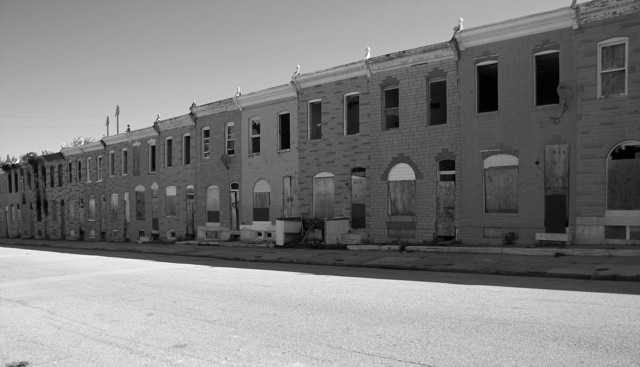 In a 2011 report, the Annie E. Casey Foundation defines “Responsible Development” as “an approach that combines economic, community and human development strategies to provide area residents, businesses, and the surrounding neighborhoods with the maximum benefit from the revitalization efforts.” This definition and the tactics outlined for getting there — including “using strict safety protocols to minimize the health hazards for residents of neighborhoods affected by demolition activities” — is a big step toward gaining national standards and protocols for urban demolition, which the U.S. has yet to establish in any meaningful way.

As a result of the lack of national standards, cities and contractors are left to make it up as they go along, often creating standards on the fly or after the fact. This was the case in St. Louis after a 2007 study found that children living in low-income areas with significant demolition activity “showed significantly higher levels of lead in their blood than in children where no demolition had taken place.” The report goes on:

That contractors and developers are left to police themselves is a little like asking food manufacturers to decide what to include on nutrition labels. It is not only inefficient and ineffective, but an egregious conflict of interest.

And yet, this is exactly what happens in cash-strapped cities across the country. Desperate for any development to take place in deteriorating neighborhoods, municipalities are uncharacteristically timid — reluctant to require, for example, even the most basic forms of communication with residents near a demolition site. Sure, some cities have spearheaded such initiatives, but most are spotty and half-hazard at best. 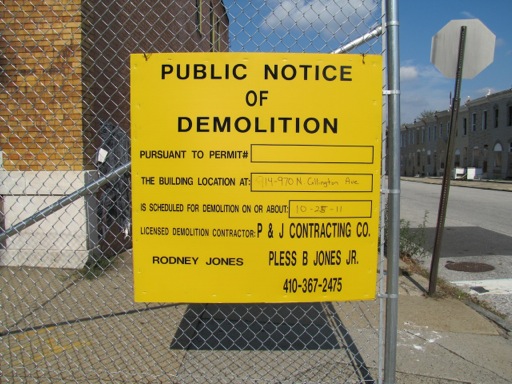 Responsible redevelopment benchmarks — like public health standards — must include a standard set of communication protocols that publicly and clearly articulate potential health risks, necessary precautions local residents should take, and the contractor’s responsibilities and protocols. It is the onus of the city (and its elected officials) to protect and inform its residents of any city-permitted activities that could potentially impact their health.

To be sure, urban demolition is a complex, risky and exhaustive endeavor for cities and developers. It is expensive, logistically challenging and just plain ugly. But — for now — it is a necessary part of the creative deconstruction of many great American cities. And so rather than look the other way, we should increase transparency around the demolition process both for the sake of residents and developers. By creating a national standard for best practices around demolition — including standardized, public-facing communication protocols — we make it easier for contractors to do their job right and for cities to protect the health of their residents.