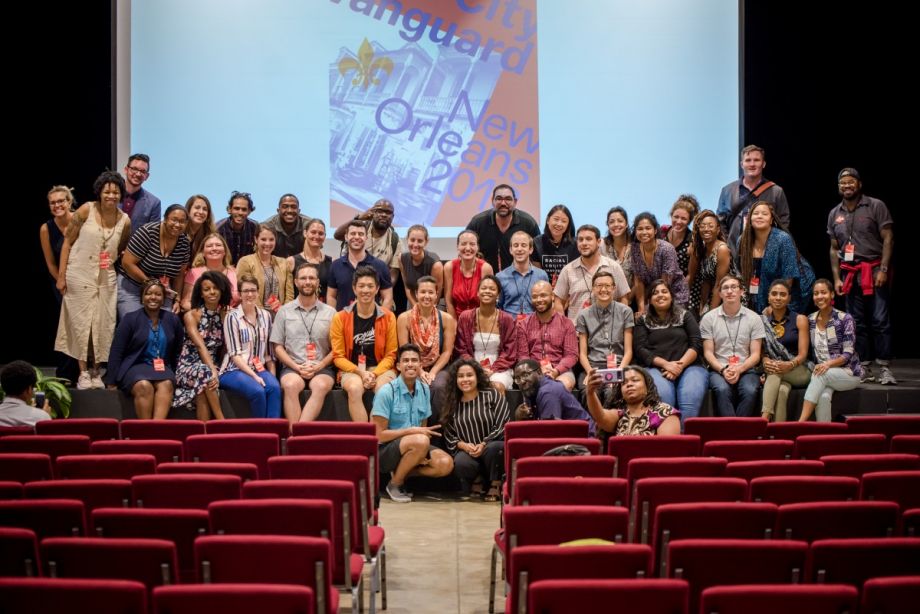 At Next City, we curate and produce events as a necessary and inspirational complement to our in-depth journalism. Time and again, we have heard that the value of this programming comes when we bridge the gaps and spur dialogue between professions that are so often siloed. Artists, architects, entrepreneurs, activists, lawyers, policymakers, programmers — all united in their love of cities and the belief in their future. Get these folks working together, and there’s nothing they can’t do.

Foremost among our events is the Vanguard conference, which has completed its 10th year. Vanguard is our annual gathering of the best and brightest rising urban leaders, who work to improve cities across sectors such as urban planning, community development, entrepreneurship, government, transportation, sustainability, design, art and media.

Each year, Next City selects applicants — whose bright ideas for cities, experience and ambition for the future all show extreme promise — to become members of the new Vanguard class. The program is competitive; in this year alone, more than 500 professionals applied for only 40 spots.

We have organized Vanguard conferences in Washington, D.C., Philadelphia, St. Louis, Cleveland, Chattanooga, Reno, Houston, Montréal, Canada, Newcastle, Australia, and New Orleans. Vanguards travel to our host city, along with Next City staff and Vanguard alumni — many of whom return to connect and converse, year after year — to learn from each other and work collectively on solutions to the challenges our cities face. This immersive conference includes site visits, panel discussions, walking and bike tours, and meetings with community leaders, all to get a street-level view of what’s happening in the host city. These experiences culminate in the event’s centerpiece, the Big Idea Challenge.

Next City’s introduction of the Big Idea Challenge at Vanguard Chattanooga, in 2014, brought the opportunity for conference participants to leave a meaningful mark in their host city. We work with each host committee to set a Big Idea theme that resonates in the communities we visit. Vanguards meet local social-justice advocates, policymakers, activists, developers, and entrepreneurs to discuss the challenges they’re facing. On such a compressed conference timeline, we don’t presume (nor do we attempt) to swoop in and “solve” for challenges that cities may have struggled with for decades. Instead, each class brings expertise to and turns a fresh lens on such pressing issues as disinvested neighborhoods, affordable housing and equitable economic development, hoping that their proposed interventions will lead to incremental and extendable progress.

As the Vanguards brainstorm their Big Idea and prepare their presentations for a public event, teams connect over conversations and drinks, share Sharpies and snacks, and pull the occasional all-nighter (you know who you are). At its heart, the Big Idea Challenge reflects Next City’s mission to share solutions across disciplines. Since 2014, more than 1,000 people across six cities have attended a competition finale. The Vanguard network has addressed 23 different challenges and helped to see five projects funded with a total of $35,000 of support.

With support from the Footprint Foundation and the Chattanooga-based crowdfunding platform Causeway, the inaugural BIC was designed to jumpstart civic local innovation through a $10,000 grant for the winning proposal. The winning team proposed free Wi-Fi for a public housing community on the city’s west side and a new pathway to connect the city’s downtown to the highway-marooned neighborhood.

Post-recession, Reno’s business and civic communities have worked hard to create a new spirit of optimism. For this city’s BIC, six teams were challenged with using the principles of tactical urbanism — small-scale, low-impact, low-cost interventions — to inspire incremental long-term changes for Reno. They had to work within a budget of $10,000. (Challenge sponsors were the City of Reno, Nightingale Family Foundation, Dermody Properties and United Construction.) The winning team, “Victory Way,” called for a series of public art projects on utility poles along a corridor due for a complete streets renovation. Tied for the win, “#Supercity” suggested inviting locals and visitors to spray paint stenciled positive messages on concrete in a linear park and take selfies in a show of civic pride and self-esteem.

The 2016 Vanguard class considered how to make underutilized properties in Houston useful to nearby residents. One was near a historic but shuttered elementary school, another a green space adjacent to a community center. Five teams met with community stakeholders and, after a site visit and two days of brainstorming, presented their visions at Discovery Green park. Judges named “Little Oasis” the winner. The team’s site was a 2,400-square-foot wedge of land on the Near Northside that had been used to store equipment during the city’s light-rail expansion. They proposed making the plot a space to wait for the light rail, hang out, and store and work on bikes — and their design included a lit, shaded structure with seating, bike racks and a bike repair station. A $10,000 grant from Rice University’s Kinder Institute for Urban Research made it possible for initial follow-up on the winning idea.

Vanguard teams were embedded with community groups to consider social, planning and development challenges in the first international BIC, and three community-centered projects in Montréal, Quebec, received funding pledges as a result.  Organizers behind Bâtiment 7, a former railroad warehouse being converted into a neighborhood hub for fresh food, healthcare and education, received $7,000. Montréalers working on Brique par Brique, aimed at preserving affordable housing in a gentrifying, low-income neighborhood, got $3,000, and $2,000 went toward helping the Montréal Urban Aboriginal Health Centre become a reality.

The Big Idea Challenge headed to Australia in late 2017, with the support of LANDCOM and Urban Growth NSW Development Corporation. Vanguards shared adaptive reuse design solutions for two empty landmark buildings — a 19th-century post office building and a former rail station — in Newcastle, Australia. The judging panel, made up of local leaders engaged in the redevelopment of the two downtown anchors, chose the team that recommended selling the grand post office building to a private developer for conversion into a multistory hotel. The revenue from the sale would go back to the site’s owner, the Awabakal Local Aboriginal Land Council, for a capital infusion to meet community needs and seed future investment. The winning plan for the former station: Transform the building and surrounding area into a mixed-use community space with sensory gardens and a makerspace.

With support from Big Idea Workshop sponsor, the National Recreation and Park Association (NRPA), Vanguard NOLA teams worked with neighborhood ambassadors to brainstorm challenges identified by residents and business owners in the Claiborne Corridor Cultural Innovation District (CID). The CID is a 25-block transformation of the area under the elevated I-10 expressway along Claiborne Avenue. In the wake of 50 years of redlining, urban renewal, and countless other racist and harmful federal, state and local policies, Corridor residents currently experience the city’s deepest disparities and negative outcomes. The CID represents the effort to rebuild with green infrastructure and reclaim the neighborhood as a thriving space for culture, commerce and play. Each Big Idea team was assigned a priority issue, around which they brainstormed solutions: Economic Development; Housing Affordability; Cultural Preservation; Transportation Choice and Access; Environmental Sustainability; and Safe and Healthy Neighborhoods. The winning team, Safe and Healthy Neighborhoods, imagined community-level interventions meant to tackle issues of life expectancy, chronic illness and mental health. These proposals included pop-up health screenings at second-line parades, bus shelters with music and meditation spaces, and repurposing vacant housing into subsidized clinics for reiki, acupuncture and other alternative medicine therapies.