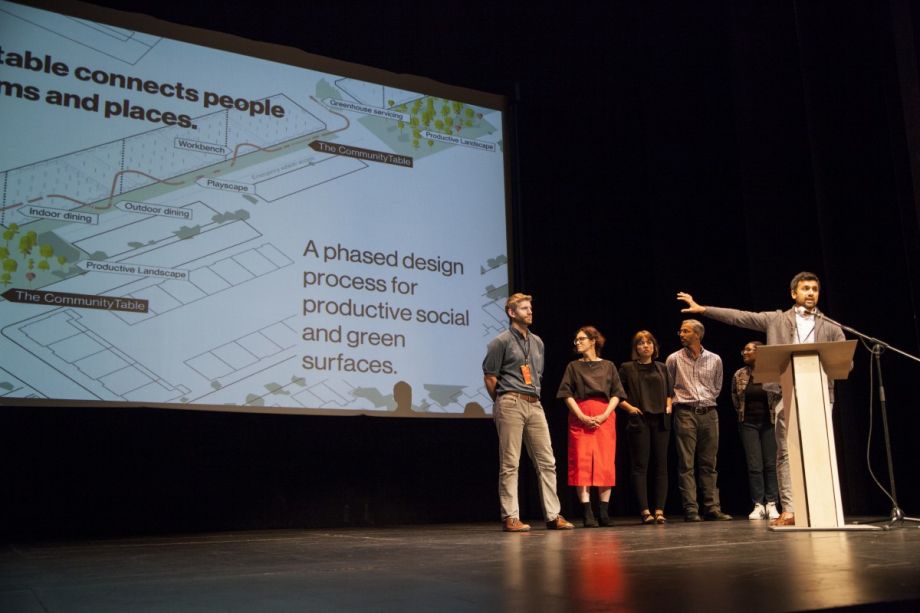 Three community-centered projects in Montréal, Quebec, received funding pledges last week as winners in the Next City Big Idea Challenge. The competition, held each year during Next City’s Vanguard, aims to make a positive impact on host cities beyond the four-day urban leadership conference.

Organizers behind Bâtiment 7, a former railroad warehouse being converted into a neighborhood hub for fresh food, healthcare and education, will receive $7,000. Montréalers working on Brique par Brique, aimed at preserving affordable housing in a gentrifying, low-income neighborhood, will get $3,000, and $2,000 will go toward helping the Montréal Urban Aboriginal Health Centre become a reality.

At every Vanguard, Next City brings together a group of the best and brightest young leaders making change in cities today. In addition to immersing themselves in the host city and learning about the innovative strategies being deployed to solve local challenges, these planners, community developers, artists, entrepreneurs, policy experts, transportation advocates and more participate in the Big Idea Challenge. Vanguard teams partner with local organizations to identify a social or environmental problem to solve, and then must publicly present an idea — based on a budget of $7,000 — to help that partner. A panel of judges chooses the winner, and though Bâtiment 7 was the unanimous top pick for 2017, an additional last-minute anonymous donation allowed the judges to award money for second- and third-place winners too.

Next City and local host Concordia University designed the 2017 challenge to incorporate the conference theme of “accessibility,” and to reflect the spirit of Montréal.

“A very exciting dynamic that Montréal captures [is] people who mobilize and who want something better,” said Charmaine Lyn, senior director of Concordia’s Office of Community Engagement. “It very much is a part of the DNA of Montréal, this sense that we want a very full life, and many people see that through a lens of connecting with other people.”

In addition to the winners, three other teams left local project partners with ideas, residual energy and promises of follow-up. They were NDG Food Depot, a nonprofit addressing food insecurity; CivitasX, a multifaith initiative that plans to expand community access to an underutilized church annex; and Tyndale St-Georges Community Centre, which wants to bring more neighbors to a children’s library.

The Vanguards found Montréal activism inspiring, and that, together with all the guidance that local partners offered, fueled the brainstorming.

“As a team, we were trying to make sure we understood the context,” said 2017 Vanguard Stephanie Thomas, who was on the Bâtiment 7 team. “They took ownership of the space and said ‘we have a new vision for this, we have a different vision’ than what was being presented to them from the government, that was being presented from the real estate developer.”

Her group presented a “community table” design to stretch across the front yard of what will be the neighborhood hub. Their rendering showed a place where neighbors can sit and eat together, but also spots for play and relaxation and performance. The team hoped that ultimately the community will decide the final shape.

“We wanted to give them the opportunity to bring back in the community, to give their big idea of what that gathering table should look like in a place that had often divided the community,” said Thomas.

Isabelle Monast-Landriault was among the Bâtiment 7 organizers who worked with the Vanguards. After the announcement of the $7,000 win, she said they planned to build on the team’s ideas.

“I learned a lot in this process because the Vanguards had a lot of insightful and interesting questions to ask our team about what this place meant to us as citizens in the neighborhood,” Monast-Landriault said. “We’ll have a public assembly in the neighborhood, and we’ll integrate the insight of the Vanguard team … . And next week we’re meeting with the borough to start discussing the space and funding. The timing was perfect.”

Leaders who have been pushing for nearly a decade for the Montréal Urban Aboriginal Health Centre (MUAHC), a place where they envision indigenous populations receiving equitable care, welcomed their Vanguard team with a talking circle on the morning of the Big Idea Challenge day. The experience ultimately brought the Vanguards to their idea of a teaching and healing lodge.

“I think it’s powerful when you see cultural pieces tied into the built space because too many times that has either been erased or not considered,” said 2017 Vanguard Antionette Carroll.

The board of the MUAHC has plans for a large healthcare center, which will be a first for the city, but with a budget of $7,000, the Vanguards decided to start with an idea to convert one room in one Montréal hospital into a space where patients could receive care that incorporates traditional healing practices.

“They already have so much data supporting the need, and I think that they are right at the point where they can take the next step and create renderings, a blueprint of the physical space of the health center,” 2017 Vanguard Kirby Broadnax said. “It also seems very feasible for them to implement part of the teaching and healing lodge.” Broadnax added that the $2,000 was a seed she expected MUAHC leaders could leverage to get additional funds for the teaching and healing lodge through partnerships they’ve already established.

The board members intend to tout their Big Idea Challenge win as proof of community buy-in to generate political support. “It was a big idea, and it got us dreaming beyond the concrete. It’s really a shot in the arm,” said MUAHC board member Pascale Annoual.

“Given the fairly complex contexts that frame our community partners’ specific issues/challenges, I was really impressed with the Vanguards’ ability to communicate what they learned about the local issues, and their partners’ strengths and opportunities for growth,” Lyn said. “What this shows me is the really nuanced skills that the Vanguards brought, as well as the strength, resolve and deep knowledge of our community partners.”

The $3,000 pledged to Brique par Brique (“Brick by Brick”) could help organizers with their Vanguard team’s idea of establishing a “financial commons,” which would bring neighborhood investors into their housing project.

“The framework they developed will be extremely useful to us in the long run,” Faiz Abhuani, director of Brique par Brique, said of the Vanguard team he worked with. “It’s hard to get out of practices like lobbying and public awareness campaigns, which are useful, but require a ton of energy to implement. Their idea puts the power in the hands of the people who are actually affected, and gives us a model to raise the resources we need.”

In the coming year, Next City and Vanguards will follow up with the hosts at Concordia University and local Big Idea Challenge partners to support the use of the funding and further implementation of the ideas.

“Next City is so thrilled to be part of Montréal’s journey toward a more equitable, sustainable, resilient and accessible future,” said Thomas Dallessio, Next City president, CEO and publisher. “Thanks to the support of Concordia University and a generous anonymous donor, Next City’s 2017 Vanguard class will leave an enduring legacy of positive change in Montréal.”

“There are so many inspiring next steps for us at Concordia,” Lyn said. “I think that there will be many dynamic, impactful initiatives emerging in the coming months, inspired and informed by our experience pulling the Vanguard conference together.”