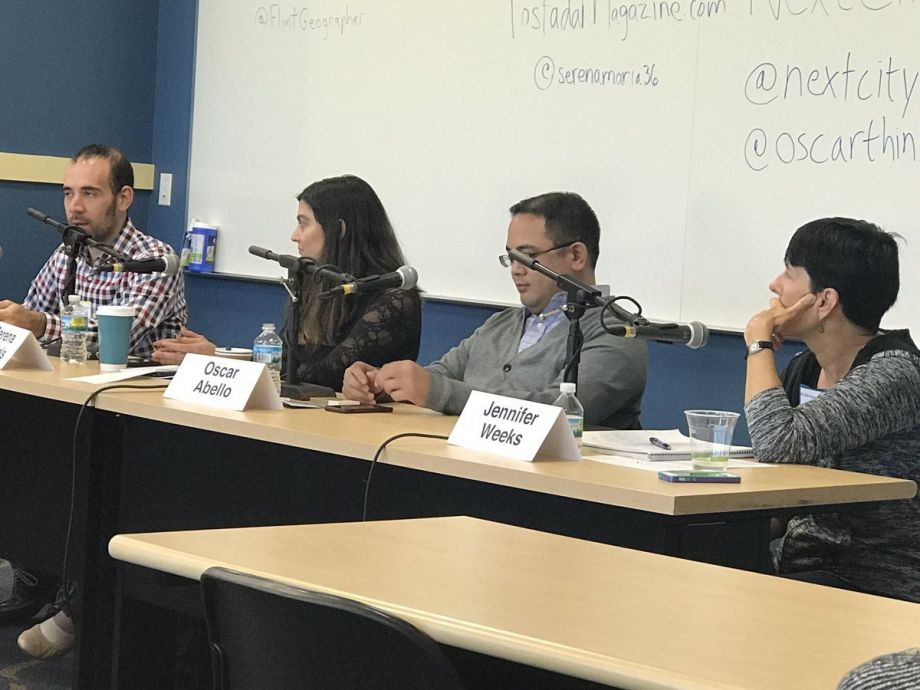 Next City and the Surdna Foundation created the Equitable Cities Fellowship in 2014. Surdna was Next City’s first funder, and has been central to our mission of promoting equity in cities. The program offers journalists of color a one-year fellowship to report on how cities are leveling the economic playing field for those who have long been denied equal opportunity because of power structures based on race, gender, sexual orientation or other factors.

The program is itself an attempt to level the playing field, since journalists of color are historically less likely to come from families with the financial wherewithal to support a budding journalist on an unpaid internship. That disparity is largely why people of color, while being half the population of the 10 largest U.S. cities, only represent 16.6 percent of fulltime journalists around the country.

“Newsrooms have always lacked diversity,” says Shawn Escoffery, executive director of the Roy and Patricia Disney Family Foundation, and former director of the Strong Local Economies program at Surdna. “Even progressive outlets that shed light on innovation and solutions in urban communities lacked the will to create an internal environment reflective of the changing world around them.”

Before becoming an editor at Next City, I was the 2015-2016 Equitable Cities Fellow. As such, I want to recognize the long legacy of journalists of color writing on these issues, including Ida B. Wells and the Memphis Free Speech, the Chicago Defender and other black newspapers, or W.E.B. DuBois and The Crisis. All too often, it has fallen on publications owned and run by people of color to hire journalists of color to report these stories. So it was a novel risk for Surdna to fund Next City explicitly to hire journalists of color to write about equitable economic development. For Escoffery, instituting the Equitable Cities Fellowship was “an attempt to confront the diversity blindspot, while in the process uncover even more impactful stories.”

Each of the Equitable Cities Fellows has put his or her own spin on how they chronicle that economic leveling. Says Fellow Deonna Anderson, “One of my favorite stories that I wrote was about the Food Commons Fresno. It’s a prototype initiative that was, at the time, looking to test how Fresno, a city in Central California with a large Latinx immigrant community, could keep food local and also help build wealth for community members. It brought together in one place a lot of models and solutions that I’d reported on. There were many moving parts and it seemed exemplary of how CDFIs, universities and other anchor institutions, and community members could work together to improve equity in a city.”

Fellow Johnny Magdaleno says his experience left him with a firm belief in the power of community engagement: “My hope is that more cities launch campaigns to get renters involved with  politics; that cities invest in entrepreneurial networks instead of praying for big employers; and that they pick up the phone to call cities outside their region to see how others are engaging  the issues.”

I gravitated toward the finance and banking dimensions of economic development, reporting on solutions to connect capital to the hopes, dreams and aspirations of neighborhoods, planners, entrepreneurs and workers from predominantly low-income communities of color. I wrote 152 stories during my fellowship; of those, 116 quoted at least one source who was either a person of color or a woman. Out of 270 sources I interviewed for those stories, 125 were people of color and 124 were women.

“It absolutely does matter who gets to tell the stories of urban communities,” says Escoffery. “And it matters who journalists choose to value as experts.”

A journalist’s network of sources is perhaps their most valuable asset. I’ll build on this network, and carry it through my career. And for this network, I have the Equitable Cities Fellowship to thank.