By Kelly Regan, Next City
and Stephanie Sung, The American Assembly
with research by Brianna Williams

Today, nearly half of all residents of U.S. cities live in a middle neighborhood. It’s not a place where real estate is hot, where prices skyrocket and cause displacement. Nor is it a place in distress, overwhelmed by vacancy and neglect. Middle neighborhoods are racially and socioeconomically diverse, historically home to working- and middle-class families. They provide critical opportunities for upward mobility.

Some are stable. Some are threatened by gentrification. Yet many more are at a great risk of tipping into decline.

What is a middle neighborhood?

Middle neighborhoods are typically home to households earning within a modest range (generally 80 to 120 percent) of the county or metropolitan median income.

Home prices generally hover around the median sales price. But this can vary. In Philadelphia, middle neighborhood home prices ranged from about 50 percent below to 50 percent above the city’s median home sale prices, according to Reinvestment Fund data.

They are home to a large portion of the American population. 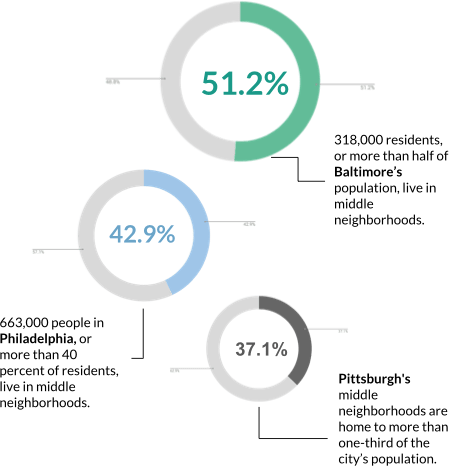 In many cities, up to 40% of residents live in middle neighborhoods, according to Reinvestment Fund data.

They provide a critical tax base to fund basic services.

Middle neighborhoods are reasonably affordable, stable and safe. Schools are decent and rents are modest.

Historically home to middle- and working-class families, including new immigrant populations, middle neighborhoods are also bastions of homeownership, places where newcomers play the odds in the hopes that the neighborhood, and home values, will improve rather than decline.

Large percentages of people of color live in middle neighborhoods. Stabilizing the housing market has a positive impact on intergenerational wealth-building. And eliminating disparities in homeownership is one of the most powerful ways to narrow the racial wealth divide.

They are strongholds of diversity.

With increased polarization across economic, racial, and political spheres, middle neighborhoods are strongholds of diversity, where people of varying standpoints interact with and learn from one another.

More than 42 percent of Philadelphia’s middle neighborhoods are racially and ethnically mixed without any one predominant racial or ethnic group, according to Reinvestment Fund data.

But they are largely underfunded.

A recent analysis of mortgage-lending data from the Consumer Financial Protection Bureau found that traditional banks have “almost completely” abandoned the types of loans favored by working-class borrowers.

Annual federal allocations from the Community Development Block Grant – a critical source of flexible community funds – peaked in 1995, but have steadily decreased, according to HUD data. This Urban Institute chart shows how federal subsidies to promote asset building do not benefit lower- and middle-income families.

An ounce of prevention is worth a pound of intervention. Investing in middle neighborhoods before they decline is easier, cheaper, and more effective.

Here are five strategies to strengthen and stabilize middle neighborhoods.

Expand lending resources and cultivate partnerships to reinforce real-estate and job markets. In Baltimore, Healthy Neighborhoods, Inc., provides funds for middle neighborhoods stabilization through a loan program with no income restrictions for applicants.

Engage with community and neighborhood leaders to document best practices and translate knowledge into accessible tools and stories. A national community of practice provides opportunities for ongoing exchange of knowledge and strategic interventions that stabilize and strengthen middle neighborhoods.

Engage in brand and marketing strategies to attract new residents. Develop awareness of historical and economic contexts for middle neighborhoods. Partner with adjacent neighborhoods to build strength from strength.

Chicago’s Greater Chatham Initiative aligns four neighborhoods as a single community, allowing them to compete more aggressively for funding among the seventy-seven neighborhoods that make up the city of Chicago. 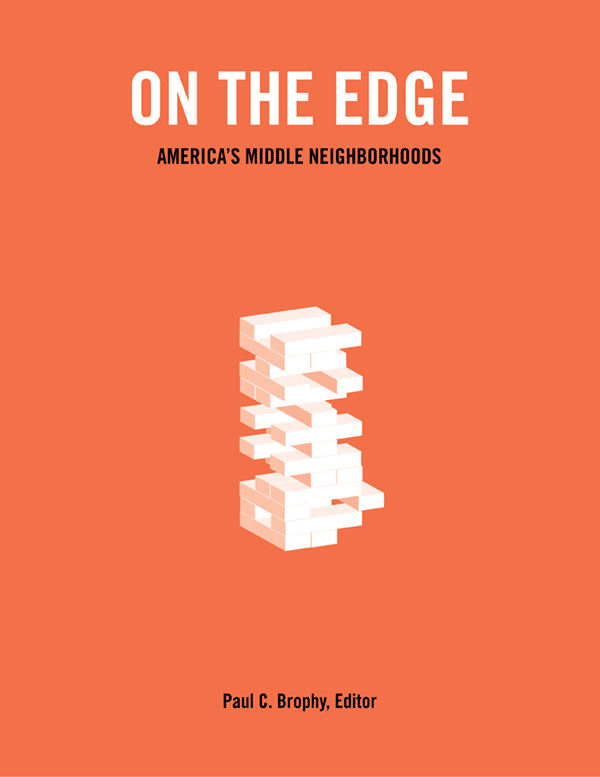 Calling attention and committing resources to the overlooked challenges middle neighborhoods face requires a holistic strategy that enlists citizens, community leaders and policymakers. For an in-depth look at the people and policies shaping these communities in transition, read On the Edge: America’s Middle Neighborhoods, edited by Paul C. Brophy.

Follow Next City’s Middle Neighborhoods coverage as we dig into the solutions and success stories that animate the conversation today.

This slideshow is part of the Middle Neighborhoods series, supported by a grant from The American Assembly.