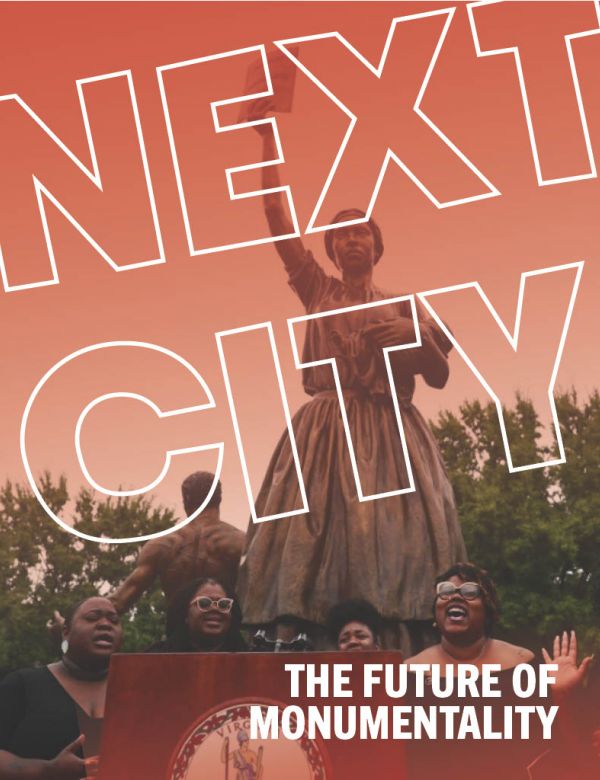 Next City and the High Line are proud to announce the release of “The Future of Monumentality,” a curated ebook that shows us what truly equitable and inclusive public spaces look like.

In early 2021, Next City partnered with the High Line to convene a two-part webinar series, also called “The Future of Monumentality.” In it, notable designers, artists, architects, policymakers and activists deconstructed the imperial violence and white supremacist repression at the heart of Western expressions of monumentality, and reimagined the form, function and role of commemoration as we move toward a more inclusive future. (You can also view these recordings in full in our archive, with a pay-what-you-wish donation.)

We are not the first era to grapple with these issues — post-Nazi Germany and post-Soviet Eastern Europe faced a similar reckoning in the previous century. These questions remain timely and urgent. At Next City, we imagine cities as places liberated from systems and cultures of oppression. But public space can never fully be free as long as elected officials glorify and support reminders of the genocide and land theft that underpin the “American Experiment.”

Removal of these reminders is the first step. We must also build the kind of world we want to inhabit, one with gathering places that honor us all. In this volume we’ve collected stories about, and captured wisdom from, the people whose work reclaims for all people the public spaces in their communities.

Thanks to our Future of Monumentality webinar moderator Salamishah Tillet, and the panelists who gave us three-plus hours of inspiring conversations: Justin Garrett Moore, Zena Howard, Paul Ramírez Jonas, Rebecca Belmore, Bryan Lee, Jr., Marvin Rees and Zsuzsanna Szegedy-Maszák. We are indebted to the authors of the stories collected here: Chanté Griffin, Lyndsay Knecht, Ryan Rinn, Phil Roberts, Chantel M. Rush and Van Turner, Jr. Gratitude likewise goes to Lucas Grindley and Jason Foster for sharing their podcast recording. Finally, no thanks are enough for our readers; your donations make this and other ebooks possible.

The Future of Monumentality series is generously underwritten by the High Line, a nonprofit organization and public park on the West Side of Manhattan whose mission is to reimagine the role public spaces have in creating connected, healthy neighborhoods, and cities. Next City’s work on this series is also made possible with support from The Kresge Foundation.

Lead support for High Line Art comes from Amanda and Don Mullen. Major support is provided by Shelley Fox Aarons and Philip E. Aarons, and Charina Endowment Fund. Additional support is provided by The Andy Warhol Foundation for the Visual Arts and The Scintilla Foundation. High Line Art is supported, in part, with public funds from the New York State Council on the Arts with the support of Governor Kathy Hochul and the New York State Legislature, and from the New York City Department of Cultural Affairs, in partnership with the New York City Council.