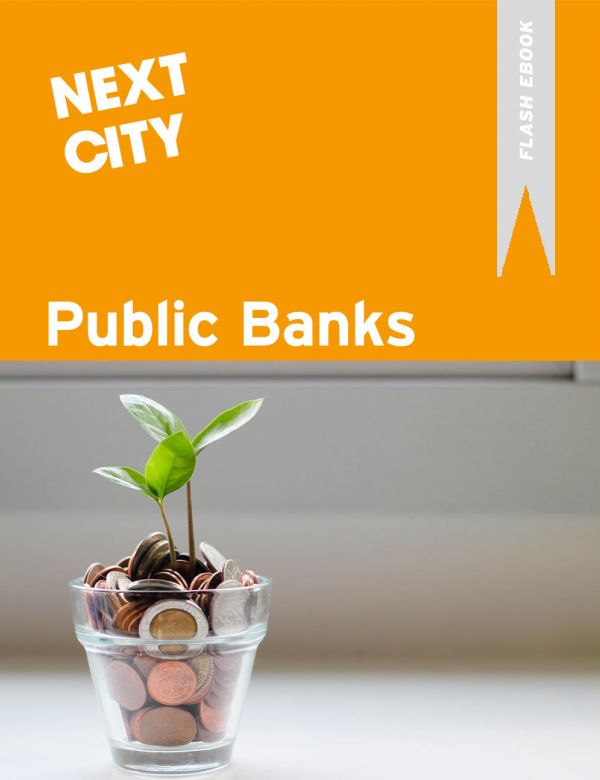 Download this ebook to learn how public banks can give cities the power to advance their policy goals while returning profits to the public.

Most people don’t put a lot of thought into where their state or city keeps its money. But collectively, state and local governments in the U.S. hold $600 billion in deposits. Most of that money is held by big banks that may make financial decisions incompatible with a city’s values. A city may say it values sustainability or environmental justice for Indigenous communities, for example, but if it keeps its deposits with Wells Fargo, which helped to finance the Dakota Access Pipeline project, does it truly value those things?

The stories in this ebook argue for cities to adopt public banks, a path forward that gives municipalities the power to align values more directly. Broadly speaking, public banks are government-owned entities that hold municipal deposits and use them to advance policy goals while returning profits to the public. Those policy goals could be affordable housing or homeownership, small business support or student loans for higher education. This path has been blazed by the century-old Bank of North Dakota, which you’ll read a lot about in these pages. Until recently, it was the only U.S. model of a public bank. (American Samoa created a public bank in 2016.)

We’re releasing this ebook in 2021 because it feels like 2021 could be public banking’s watershed year. Spurred in part by the economic devastation wrought by the pandemic, New York, California, Oregon, Washington state, New Mexico, San Francisco and Philadelphia have all introduced legislation or taken steps toward advancing public banking in their cities and states. You’ll read about a number of those efforts in this book.

This “flash ebook” features a simpler, text-only layout, unlike our standard ebook offerings. We hope the ideas contained within provide inspiration, hope and a good read.

Thank you, as always, to the many Next City donors who make these ebooks possible.