You Need a License to Own a Dog in Philly; Why No License to Demolish A Building? – Next City

You Need a License to Own a Dog in Philly; Why No License to Demolish A Building? 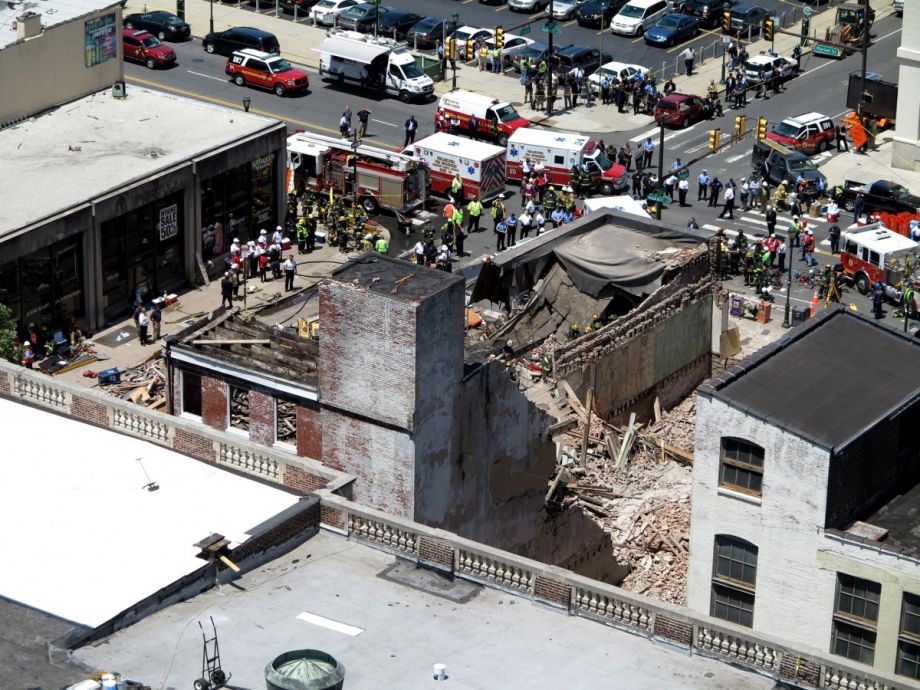 A collapsed building on 22nd and Market injured 14 people and killed 6. Credit: PlanPhilly

How did a simple demolition job in a major city in one of the world’s most technologically advanced countries turn into a deadly catastrophe? It’s the question to puzzle over in the wake of the collapse of a four-story building that killed six people and injured 14 in Philadelphia’s Center City.

One response is accidents happen and when they involve heavy materials in a population-dense location, well, people die.

As California Polytechnic State University civil engineer Dan Jansen put it in an interview with National Geographic, “there’s a lot of judgment that goes into these things.”

“As best as you try to do everything, there’s still a little bit of guesswork involved,” he said.

But it’s far worse than that. Richard Basciano, infamous for owning a variety of adults stores and theaters in Philadelphia and New York, hired a contractor with a criminal record according to NBC Philadelphia. Apparently, the contractor they hired, Griffin Cambell, pleaded guilty to insurance fraud and theft in 2009 and owes thousands of dollars in back taxes — not someone you should trust to demolish a building. Basciano only paid Cambell $10,000, which is an extraordinarily low price for a task as large as demolishing a building. And don’t even bother asking if Cambell was licensed to do the demolition. Neither Pennsylvania nor Philadelphia require demolition contractors to be licensed due to the fact that the city and state don’t even offer demolition licenses. To keep a pet dog in Philadelphia you need a license. Perhaps, the same level of rigor should be applied to demolition contractors as dog owners.

Nadine White was among the survivors trapped under the rubble and her lawyer, Robert Mongeluzzi, is suing Cambell for negligence.

“From what we can understand, given [Campbell’s] checkered past, and what appears to be a total lack of experience and know-how, we believe that was a grossly negligent selection,” Mongeluzzi said.

Carelessness and lack of oversight is not just an American thing. In January of last year, in Rio, three buildings collapsed killing at least 17 people. It’s thought that the buildings collapsed due to two illegal construction projects happening on 16th floor of the tallest builing. The owners of the building didn’t bother registering and getting permission for the work they wanted done and instead put people’s lives as risk.

In April, near Mumbai, a building collapsed and killed 74 people. Nine people were arrested afterwards — some were from the building company and others were police officers they bribed.

In an interview with CNN, Bangladesh Home Minister Muhiuddin Khan Alamgir said, “The building was not built in compliance with the [safety] rules and regulations.”

A statement like that raises the question, how was a building like that allowed to be built in the first place? This tragedy was entirely avoidable. It’s not enough to have the regulations, you have to have someone available to make sure they are followed through.