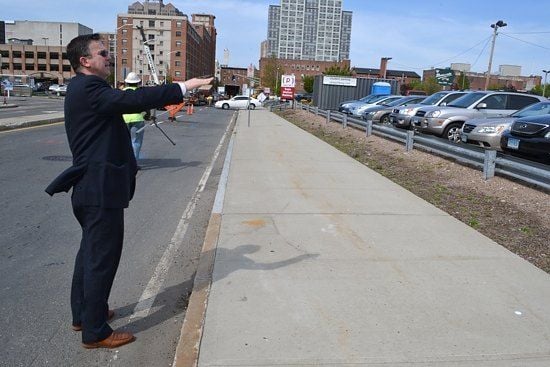 A topographic challenge has stalled the plans of a Canadian developer looking to build on the grave of the New Haven Coliseum: It turns out the land around the Connecticut city’s downtown block goes up and down, up and down.

The slanted ground has delayed the work of the city’s preferred developer, LiveWorkLearnPlay of Montreal, which has been conducting a $1 million feasibility study of the 4.5-acre site since August of 2011. The developer wants to build apartments and then possibly a hotel on the land.

The city-owned site, which once held the monster trucks and rock shows, has remained a parking lot since the city blew up New Haven’s Veterans Memorial Coliseum in 2007.

The city and developer — the second chosen so far to try to come up with a plan for the spot — are now negotiating a deal to extend their one-year deal as both parties grapple with the slope of the land.

A visit to the block between State, George, Orange and North Frontage streets shows some dramatic dips and climbs. It turns out that State Street is lower than Orange Street, which in turn is much lower than the ground floor of the Knights of Columbus building, which towers nearly one story above the ground.

The slopes are significant because the city isn’t hoping to just fill an empty lot. It’s looking to weave a new development into a “reconnected” set of streets that will cross the “great divide” known as the Route 34 Connector (aka the mini-highway-to-nowhere), city traffic chief Jim Travers said in a recent visit to the site.

In a later phase of the Downtown Crossing project (a project that involves filling in the highway and begins with a 10-story office building, to be constructed by developer Carter Winstanley two blocks away from the Coliseum block), the city aims to reconnect Orange Street across Route 34 to connect to South Orange. The question is: Where would Orange Street go?

A look across the highway reveals that the surface of Route 34 actually slopes up towards the south. There you can see the top of a tree on South Orange — but not the trunk, because the street is so far below.

The city and developer have to decide at what grade to build Orange Street. Below the highway? Or at grade with the Knights of Columbus?

The current grade of Orange Street already sits below the height of the surface lot, which was thrown together as a temporary fix after the Coliseum came down. The temporary fix became the new normal after the city’s first preferred developer, Northland Investment Corporation, abandoned its plans to build a “10th Square” of the city on the site.

As George Street heads towards State, the difference in grade between parking lot and sidewalk becomes more pronounced.

Richard Martz, vice president of LiveWorkLearnPlay, said his company didn’t grasp these tricky slopes until launching a feasibility study last August. After Northland backed out, his company emerged as the city’s new preferred developer after a second round of bids.

LiveWorkLearnPlay signed a one-year Memorandum of Understanding with the city outlining a schedule by which the developer would analyze the site and come forward with more specific plans. In return, the city agreed not to negotiate with other developers during that period.

Martz’s general plan is to build a first phase of 300 to 400 apartments, and reserve a second portion of the site for a future office, institution or hotel.

City Economic Development Administrator Kelly Murphy said the city chose LiveWorkLearnPlay because of the company’s officials “gets urban.” They’re not just developers, but urban designers and planners, too. They have a record in university towns, she said.

Murphy said her office will ask the Board of Aldermen to extend that memorandum of understanding to give the developer more time to look at the site. She said the developer has held up its end of the bargain, but the city has been too wrapped up in the first phase of Downtown Crossing to be able to devote staff time to helping LiveWorkLearnPlay tackle the tricky problem surrounding the grade of the site.

Engineers hired by the city and the developer have been meeting recently to discuss the dilemma.

LiveWorkLearnPlay’s Martz said the city’s current plans call for sending Orange Street under Route 34. That means at the corner of Orange and Frontage, there would be an elevated highway over Orange Street.

As his firm began to analyze the site, Martz said, “what we realized early on is that configuration of that Orange Street corner has a huge impact on how we’d orient a building.”

A building next to an elevated highway isn’t ideal urban planning, Martz said.

“The livelihood of a street that goes under a highway is different than one that is fully at grade.” What happens to Orange Street affects the firm’s ability to bring in street-level retail, Martz said. Ground-level stores would improve the walk from Union Station to downtown, serving the city’s objective of “reconnecting” the city across Route 34.

“We want the street to be very, very active” with retail, Martz said.

The firm came up with a counter-proposal to the Orange Street problem: Bring Route 34 down to meet Orange Street at a regular traffic lighted intersection, with no flyovers needed. Drivers headed south on Orange Street would hit the light, then cross Route 34 and continue on their way to South Orange and on to Union Station.

Martz said the city “likes that as a potential option, but there are significant traffic impacts.” So the firm is now setting about studying the traffic problem. The firm has retained Newman Architects to draw up plans for the development. The plans have been held up until the firm figures out what to do with the Orange-Frontage corner, he said.

The firm has looked at dividing the 4.5-acre site into two, but “it’s premature to say what that design would be,” Martz said.

Traffic chief Travers said the city-hired engineers, Parson & Brinkerhoff, have been discussing the street design with the Canadian firm. At this point, several options are on the table. The fate of Orange Street remains up in the air.

The city is scheduling a public meeting for the end of May or early June about the Coliseum lot as well as other major projects in the Hill-Downtown area, including the train station and Church Street South.

Martz said it’s worth the delay to get the project right.

“We like the site,” he said. “We’re very optimistic about doing something there, we just want to produce the best product that we can. We’re trying to set the best conditions for success before we get into it.”