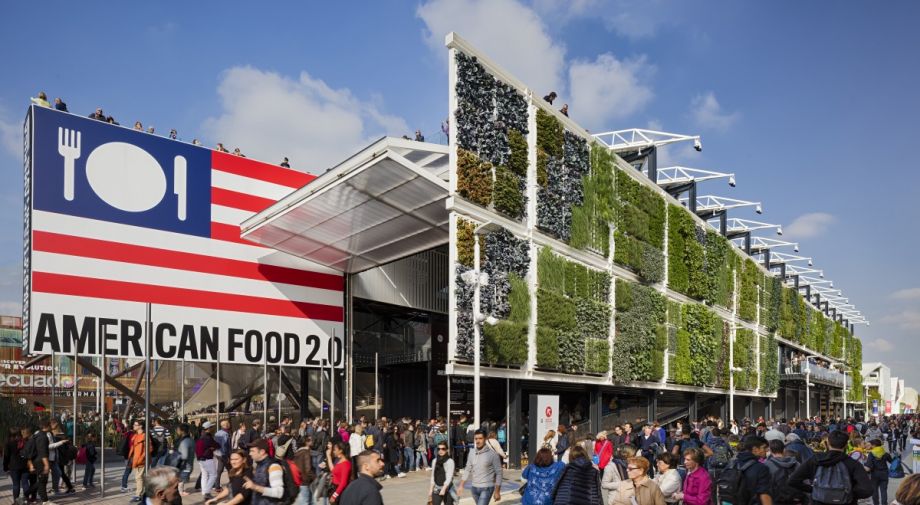 And those are just the pavilions. Virtually every marker of modern life — Bell’s telephone, Otis’s elevator, RCA’s television, Edison’s electrical outlet, ATT’s video conferencing, the x-ray machine, touch screens, the Ford Mustang and Cherry Coke — all debuted at an American pavilion at a world’s fair. Expos have traditionally been opportunities for America to celebrate its technology, culture and innovation in a global context.

Expos, the quinquennial display of national, corporate and cultural hegemony started as commercial fairs more like today’s trade shows than the theme parks they are today.

London, in 1851, held The Great Exhibition, an exposition of industrial wares in the single most remarkable building of its time: the Crystal Palace, 1,851 feet long, made of cast iron and glass, and prefabricated to be entirely assembled and disassembled piece by piece. That Joseph Paxton designed, fabricated and erected it in nine months would be remarkable even today, but inventing a completely manufactured building (as opposed to, say, artisans stacking stone) in 1851, the same year as Singer created the sewing machine, makes the feat even more astounding. It is a vision mostly passed over in the history of architecture as a “greenhouse innovator translating his skills to event buildings.” It was much more.

Subsequent expos evolved into highly branded affairs in which participants sought a revivified international identity as nations (or corporate nation-states) and did so with increasingly bombastic pavilions.

That evolution, from a single London building to a white Chicago city, devolved eventually into an architectural brawl. The buildings began to drop their air of cooperation and became independent follies, each attempting to erase all the others from the visitors’ field of vision. World’s fairs became confusing jungles of competing offerings to national pride. Urbanity transformed into suburbia.

The technological innovation embraced at the U.S. 1967 and 1970 pavilions has been sadly missing from most subsequent pavilions. Lately, the U.S. pavilions have become opaque, oddly shaped solid boxes filled with technology, a regrettable decline from Montreal 1967 to Shanghai 2010.

Today, America’s participation in any expo is at the mercy of corporate donations, relegating the U.S. pavilion — along with our national identity — to the vagaries of the commercial marketplace. Since a 1999 act of Congress, America has been funding participation exclusively with private donations. This outsourcing of the U.S. identity hasn’t reflected the national pride of earlier pavilions.

Private funding works for the Olympics and the World Cup (the only international events larger than the world’s fair), both driven by billion dollar broadcast fees and the commensurate advertising. But an expo is an act of global diplomacy.

Expos now cost the host country billions of dollars (the last one was $2.5 billion), remain open for six months and are largely demolished afterward, constituting a massive waste of material and human resources. But building a small, temporary city doesn’t have to be a waste. The Bureau International des Expositions (BIE) could easily require an afterlife for the expo, so that every single expo building would be upcycled to useful construction.

Inevitably, objections are raised by those who feel a virtual expo would be more efficient than a built one. But the accident of a U.S. delegation running into an Iranian delegation, chatting with the Russian delegation, while on the way to the Vietnam pavilion for lunch can only happen at a real, built expo. The U.S. pavilion usually receives record numbers of international visitors, and as an act of soft diplomacy, these chance encounters that every visitor experiences are unequaled.

This has all become quite personal for Biber Architects: We designed the latest U.S. pavilion at Expo Milano 2015. It was by far the most visited pavilion at the expo, welcoming more than 6 million visitors, double the estimate. Called the “best public diplomacy in the past five years” by Ambassador David Thorne, advisor to Secretary of State John Kerry, the 2015 pavilion represented American identity, ingenuity, openness and, inevitably, corporate power.

The pavilion was an outstanding success in all ways but one: funding.

The very late U.S. decision to participate, combined with meager marketing and a long delay in the appointment of a commissioner general, has left a debt of $26 million out of the $60 million needed to design, build, operate, program and staff the pavilion.

Now, post-expo, dozens of small private businesses are forced to foot the bill for America’s pavilion. Assured by the pavilion’s commissioner general that they would not be left paying for the pavilion, so far they are. It has resulted in lost jobs and may bankrupt some small firms.

To fix the future and repair the past, the financial model must be changed to full (or matching) federal funding to ensure that the U.S. pavilion can truly represent the America to which we aspire. The federal government must resolve the current debt so that the small businesses that did the successful work on the pavilion are not punished for stepping up. And the U.S. must participate in future expos as a nation, rather than as an ad hoc conglomerate of corporate sponsors. Finally, the BIE must revise the required demolition of expos and create a sustainable model.

The cost is small, but the impact can be enormous. If the U.S. is ever to participate in a world expo again we must fix the system now.

James Biber, FAIA LEED, leads Biber Architects, a tightly organized, highly experienced team of architects and designers working for more than 25 years in New York and internationally. Trained first as a biologist, then as an architect, Biber has practiced architecture in a multi-disciplinary environment for more than 25 years. James’ projects include the USA Pavilion at Expo Milano 2015, the Harley-Davidson Museum in Milwaukee, CUNY’s Macaulay Honors College, the nation’s Millennium Time Capsule, galleries at the Koch Institute, MIT, school redesign for Success Academy Charter Schools and and various NYC agencies.