These Boston Apprenticeships Are Pushing the Economy Toward Equity – Next City

These Boston Apprenticeships Are Pushing the Economy Toward Equity 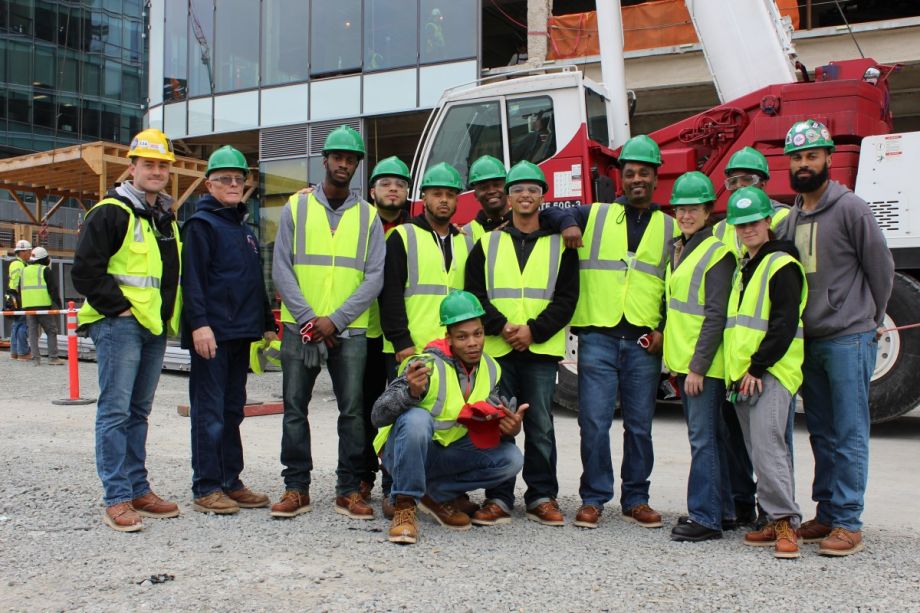 Members of the Building Pathways program, part of the Greater Boston American Apprenticeship Initiative, visit a construction site at Skanska in the Seaport. (Credit: Boston Mayor’s Office of Workforce Development)

Donan Cosme was only 15 when he found himself in the crosshairs of gang life, facing off against a member of a competing gang, guns raised. More than a decade later, these two men would meet again — not as rivals, but as colleagues and fellow apprentices in Boston’s Sprinkler Fitters Local Union 550.

“We’ve put our differences aside and we can work together like it never happened,” Cosme, 30, said. “This is what’s possible when you give people a second opportunity to make something of themselves.”

Cosme credits this second opportunity to Operation Exit, a program that provides formerly incarcerated and at-risk residents with the skills and support necessary to enter apprenticeships in building trades, culinary arts and the tech industry. The program has placed dozens of graduates into career-track apprentice opportunities that pay well above the city’s living wage.

After serving six months in prison in 2015, Cosme was barred from returning to his former job at the Marriott and was repeatedly turned down for jobs because of his criminal background.

“I had a mortgage and three kids and I was worried I would have to go back to my old ways to support them when my parole officer recommended Operation Exit,” he explained. “This program helped me turn my life around completely.” Cosme is now in his second year of apprenticeship as a sprinkler fitter, and makes $32 an hour.

To date, 42 young people formerly involved in the criminal justice system have graduated from Operation Exit and been placed. “Sixty percent … are young fathers,” noted Freddie Velez, deputy director of Youth Options Unlimited Boston, which co-runs the program with the Mayor’s Office of Public Safety.

The program, launched in 2014, is one of several workforce training programs spearheaded by Boston Mayor Martin Walsh that aim to connect unemployed and underemployed residents to careers in unionized trades.

With a focus on workers who face barriers to employment — including women, low-income residents, workers of color and those who have been involved with the criminal justice system — these programs don’t just place workers in jobs, they give them paid opportunities to train for lifelong careers in professions that provide family-supporting wages, job security and benefits.

“If you want to build a great city, you have to make sure that everyone has a chance to thrive,” said Trinh Nguyen, director of the Mayor’s Office of Workforce Development and the Office of Financial Empowerment. “That’s why the mayor has made it a priority that no one gets left behind as the city grows.”

Boston’s Building Boom Fuels Workforce Changes
Boston has enjoyed strong economic growth in its recovery from the Great Recession, with a steadily declining unemployment rate that is now 2.5 percent. The city’s comeback, however, has failed to reach many communities — especially people of color who have long struggled with poverty and low opportunity.

Though Boston is rapidly becoming more diverse (the city has been majority people of color since 2000), residents of color continue to experience unemployment and poverty at double the rates of white residents.

“The administration knew we had to do something more intentional and systemic to lift up [our] communities … . More than finding jobs, we needed to build a pipeline to lifelong, stable careers,” Nguyen said. “This isn’t just about ethics. It simply does not make good business sense and it’s not good for the city as a whole to have an economy that only works for a select few.”

With a development boom fueling 27 percent growth in Boston’s construction industry by 2022 and an aging workforce that will need to fill thousands of positions as more senior workers retire, the building trades posed a ripe opportunity to grow a more equitable economy.

In 2011, Walsh was head of the Boston Building Trades Council, and he launched a pre-apprenticeship program, Building Pathways, that provided six weeks of comprehensive training to local residents from groups historically underrepresented in the building trades — women, people of color, low-income workers — to prepare them to apply for state-registered apprenticeship programs.

“The program was life-changing for participants,” said Mary Vogel, executive director of Building Pathways. “They came in having had a series of dead-end jobs, and after completing the program, career opportunities were open to them that would allow them to support their families and eventually buy a home.”

When Walsh became mayor, he brought this program under the umbrella of the city’s workforce development program and expanded it. Building Pathways was one of three efforts launched as the Greater Boston American Apprenticeship Initiative (GBAAI) in 2015, thanks to funding from the U.S. Department of Labor, the Boston Metropolitan District Building Trades Council, and other public-private partnership funds. GBAAI also includes a program focused on the hospitality industry, Boston Education Skills & Training, and one focused on younger workers in construction, YouthBuild Boston.

Between 2015 and 2020, GBAAI will support a total of 405 pre-apprentices. In its first year, the initiative exceeded its equity and inclusion goals for enrollment and graduation: 64 percent of enrollees were people of color, 36 percent were women, and the cohort had a 96 percent graduation rate. So far in its first year, GBAAI has successfully placed 45 percent of its graduates into registered apprenticeships — a number that is expected to rise throughout the year as more apprenticeship slots open up in various trades.

Setting Up Boston Workers for Success
Like Operation Exit, the GBAAI programs provide an opportunity to “learn and earn,” paying above minimum wage for workers to learn job-readiness skills, get hands-on field training, complete industry certifications, and prepare for applications to the trade union of their choice. Once accepted, these workers immediately make well above a living wage, with regular pay increases, benefits, and in some cases, opportunities to earn college course credit for their on-the-job work. In general, a job in one of the trade unions offers the potential to make $50,000 to $100,000 a year.

The trades featured in these programs — construction, hospitality, culinary arts and technology — were prioritized by city leaders because they offer opportunities to earn middle-class wages to workers without a bachelor’s degree.

Still, although these trades don’t require a college education or prior experience in the field, the application process to join a trade union can be extremely competitive, with waitlists several months long.

This is where the city’s pre-apprenticeship programs shine. They not only provide the types of skills and training necessary to transition into an apprenticeship, they also ground participants in the culture of their chosen trades, connect them to tradespeople and contractors in the field, and provide an ongoing network of peers and professionals to support them in their careers. In many ways, these programs reproduce the kind of connections and social capital that have traditionally helped young workers from families or communities with deep roots in the trades transition into apprenticeships and career pathways.

The social support of fellow participants proved especially helpful for Shamaiah Turner, 31, who is finishing up her fifth year of apprenticeship as a sheet metal worker.

“Being female in a male-dominated industry, the network of other women I could talk to at Building Pathways was key to me being successful and staying sane,” said Turner. Women make up less than 7 percent of workers in construction in Boston, and just 2.2 percent nationwide.

“It can be challenging when you’re so frequently underestimated — it’s taken a lot of patience and deep breaths,” she said. Once she becomes a journeyman, Turner hopes to continue her education so she can take on a leadership role within her union.

Shifting Boston’s Labor Market Toward Equity
Ensuring the success of participants within the competitive apprenticeship market requires that programs like Building Pathways and Operation Exit work not only on the “supply” side to prepare applicants but also on the “demand” side to “increase industry demand for a more diverse workforce,” Vogel said.

Thanks to a 1985 ordinance, city-funded construction projects are supposed to make a good-faith effort to have 50 percent of hours go to Boston residents, 25 percent to workers of color, and 10 percent to women, but these standards often went unenforced — until the past several years. Through the mayor’s initiatives and efforts from within the building trades, employers are increasingly being held to these standards.

“[Building Pathways] sits on access and opportunity committees that monitor and support employer compliance with diversity hiring goals,” Vogel said. “We also make sure we’re responding to industry needs and feedback by having board members from within the building trades and hosting an employer advisory committee.”

He called Walsh a “transformative figure” in the building trades who helped to spur a “mind shift” in how a field long dominated by white men now views its role in creating equitable career opportunities.

“We know that building trades do great things for families because of the types of careers they provide, but Walsh helped show how important it was to make sure that everyone could access that opportunity, no matter where they came from,” Doherty said.

Though Walsh’s efforts were initially seen as “one more thing” that contractors would have to juggle, Doherty explained that over time employers in the field are coming to understand the value of diversity in their workforce.

“It’s taken a few years, but folks are seeing that the path forward for a 21st-century workforce has to be about inclusion.”