Economics in Brief: Women Are Disappearing From the Workforce at a Concerning Rate – Next City

Economics in Brief: Women Are Disappearing From the Workforce at a Concerning Rate 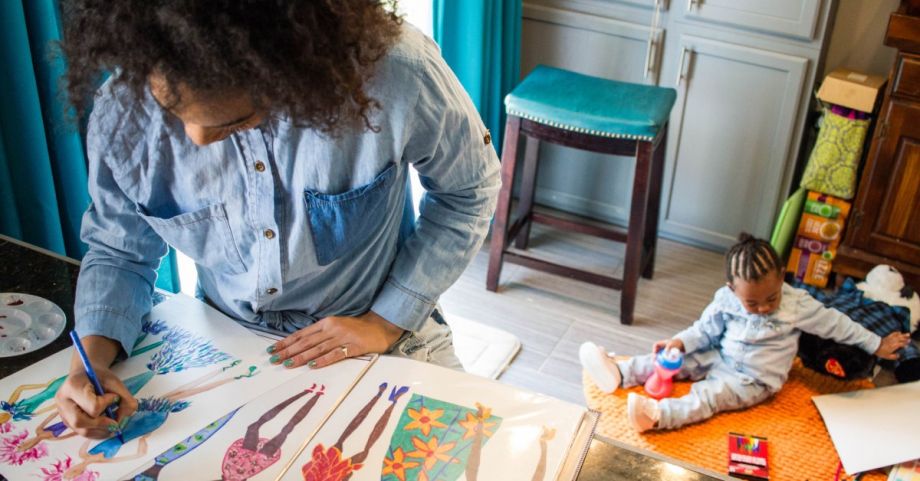 Many working women have been pushed out of the workforce to care for children during the COVID-19 pandemic. (Sabrinavfholder/nappy.co)

Women Are Disappearing From the Workforce at a Concerning Rate

More than 2.3 million women have left the workforce between February 2020 and January 2021, CNBC reports. That puts women’s labor participation rate at 57%, the lowest it’s been since 1988.

Most of the women who have left the workforce have been forced to do so because of the closures of schools and day-care centers. During this pandemic, in families with young children, the lower wage-earner typically bears the childcare burden. And in many two-income, heterosexual households, the woman earns less.

Dropping out of the labor force will affect a person’s wages if they do eventually start work again. One study found that women who took just one year off from work earned 39 percent less when they returned to the workforce than women who continued working.

Baltimore Mayor Brandon Scott has joined Mayors for a Guaranteed Income, a group pushing for universal basic income across the country, the city announced in a press release. The city is committing to launching a direct-cash payment pilot program this year.

While the specifics of Baltimore’s program will be hammered out by a new steering committee, the city’s press release notes that other pilots typically serve a few hundred households with $500-$1000 a month for about two years.

Former Stockton Mayor Michael Tubbs launched one of the first guaranteed income pilots in the U.S. A dashboard tracking the project found that most recipients of the money spent the money on food, consumer goods, utility bills or car maintenance. They reported feeling less stressed and anxious, and that their lives had changed for the better.

More than $93 billion of the $101 billion of Paycheck Protection Loan funds approved since the program reopened last month have gone to previous borrowers, American Banker reports.

Banks both large and small told American Banker that they have received many more applications from so-called second-draw applicants than from new applicants. From this data they inferred that borrowers from Phase 1 are still struggling to make ends meet, given that many hard-hit industries such as hospitality and food are no closer to reopening safely than they were six to nine months ago.

Another possible explanation is that new business owners who need the assistance still could not apply or did not know how to apply. In the first PPP round, many very small businesses without existing banking relationships were shut out of accessing the relief.

Some banks have had more success bringing in new customers. Customers Bancorp, which has 50,000 PPP loans in its pipeline, told American Banker the majority of its new loans were by new borrowers. And fintech company Biz2Credit is the third-biggest PPP lender in this new round, with 69,290 loans totaling $2 billion. (Overall, however, borrowers in round 1 of the PPP gave fintechs low marks for customer service, as Next City reported last week.)

Biz2Credit CEO Rohit Arora told American Banker that his company is serving customers that don’t have other options. “It’s a uniform story where these businesses are very small, many minority-owned. The loans they’re seeking are small, $3,000 to $25,000. They’re sole proprietorships with no strong banking relationships. Many of them don’t even know how to approach a bank.”