With Buses Bolted to Tugboats, Manila Proves Any City Can Have a Ferry System – Next City

With Buses Bolted to Tugboats, Manila Proves Any City Can Have a Ferry System 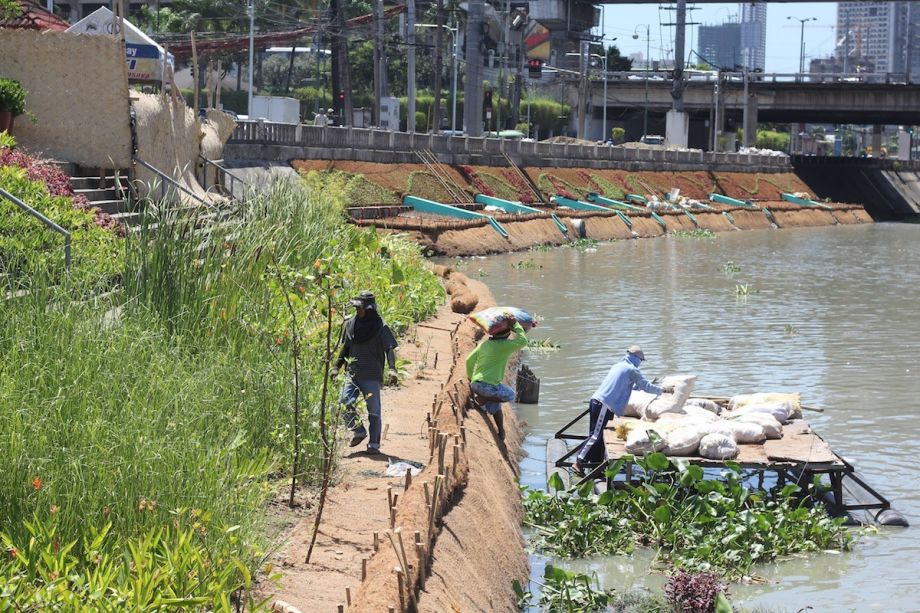 The cleanup of the Pasig River has allowed the city to re-launch a ferry service once again. Photo credit: Aurora Almendral

The more Manila is strangled by traffic, the more the Pasig River, which winds its way lazily through the center of the city, looks like a highway temptingly free of congestion.

The river has, according to the head of the Metro Manila Development Authority, Francis Tolentino, the equivalent of ten road lanes – a bonanza of transportation space in an extremely crowded city. But how transitable that space is has been an open question for decades. From Bangkok to Istanbul, commuter rivers are used to relieve road traffic, but in Manila, which is bisected by the Pasig and laced with its tributaries, the dream of a citywide network of water taxis has remained elusive.

In the late 1990s, motorized boats plied the river, but patches of invasive water lilies and a dense layer of surface garbage thwarted their propellers, and the system soon shut down. What’s more, few people wanted to coast along the putrid waterway, which was thick with kitchen discards, dead pets and the human waste of the thousands of squatters living in riverside shanties.

The Pasig River Rehabilitation Commission, in collaboration with other government agencies, spent the next decade cleaning the Pasig and the many estuaries that feed into it. They relocated entire squatter communities from the river banks, and installed indoor plumbing for other nearby settlements. They scooped up the garbage floating in the river, and hired “River Warriors” — members of the community who were trained by the Philippine military — to enforce cleanliness. They dredged up silt to deepen the river and sifted out decades of refuse: everything from millions of plastic bags and soda cans to dead bodies, mattresses and washing machines. They planted gardens along the banks.

In that time, the river has come a long way. You wouldn’t want to take a dip in it, but you can at least now stand on the banks and breathe normally, without choking on the awful stench. It’s a huge improvement.

With the river navigable again, in 2009, the PRRC gave water taxis another shot. They contracted Nautical Transport Services, Inc., a private ferry operator, and built 14 ferry terminals along the length of the Pasig. This time, the effort was plagued by poor planning and mismanagement. When I asked Amelita Gamay, head of public information and tourism at the PRRC, why it didn’t work, she answers bluntly, “It was just a bad system.”

The problem was the boats. The 150-seater ferries were way too big, and waiting for one of them to fill up before launching could add up to an hour of frustrated thumb-twiddling to a commute. Not to mention, the ferry terminals were inaccessible from the main road and other modes of transportation, making the system impractical for daily commuters. The ferry operator tried to solve this by building his own terminals — little more than rickety floating docks — in high-traffic areas. But when Manila flooded in 2011, the docks were swept away. With a low passenger rate and financial loss, the ferry system was abandoned again.

Before and after the cleanup of the Pasig River. Photo credit: Pasig River Rehabilitation Commission

Then, last week, the Pasig River Rehabilitation Commission, along with the Metro Manila Development Authority (MMDA), launched yet another ferry system. The boats are a bit of an eyesore and can challenge a person’s sense of sea-worthiness, but you’ve got to admire the resourcefulness of the people that cobbled them together. The MMDA took the city’s old brightly painted minibuses and welded them onto repurposed tugboats. They are launching the system with only four stops, and have yet to contract a private ferry operator.

The jerry-rigged system looks embarrassing at first blush, but the PRRC, the MMDA and the private ferry operator are sucking it up and learning from their past mistakes. By expanding to fill demand, rather than just plopping a few boats onto the river and hoping for the best, this most recent incarnation may actually work thanks to its lean, nimble start-up.

The ferry-busses seat about 50 people each, so they’ll fill up quicker and be less of a financial loss if the boat has to launch at less than full capacity. And rather than waiting for it to fill up, the boats will run on a set schedule during the morning and evening rush hours. The four stops are express between the most frequently used terminals. While it serves fewer areas, it will be more efficient to run and more convenient for passengers that do use it.

Amelita Gamay of the PRRC explains that three ferry-service operators are currently vying for the contract to operate on the river — and a little competition may lead to a better service for commuters. In her office she pulls out a map and an inch-and-a-half-thick report. It’s the feasibility study for the Pasig River. Eventually, they want to expand service to all 14 terminals, then into the towns on the shores of Laguna de Bay, the massive lake on the southeast border of Metro Manila. They’re continuing the painstaking work of cleaning up the Marikina and San Juan Rivers, the Pasig’s largest tributaries, and hope to someday run ferries on them, too.

Ed Bondad, CEO of Nautical Transport Services, Inc., the company that ran the ferry system that failed in 2011, remains committed to the Pasig River ferry. Bondad says there have been several “game-changers” since 2011, like a new bridge in eastern Manila that he says will bring in thousands of new customers. “We believe in this project,” says Bondad. “We will not abandon it.”

It may not be impressive now, but this ferry system was at least 20 years in the making. The vested parties have taken a frank look at what went wrong, tried to fix it, and are moving forward with optimism.

On its first week, the MMDA ran the ferry free. But one of the biggest drivers of demand may be limited choices. Starting in July 2014 and at least until 2016, Manila will undertake thirteen major road projects. The long-term aim is to significantly mitigate traffic in Manila. The short-term effect will be a couple of years of even more hellish traffic. This, along with improved planning, might just be the thing that makes the Pasig River ferry a lasting part of Manila’s transportation infrastructure.