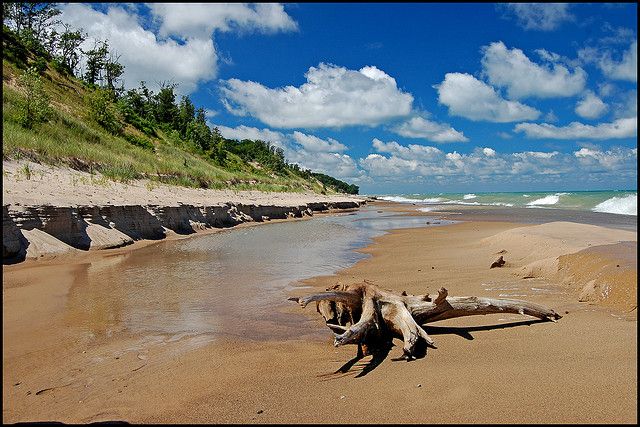 You may not usually think of the upper Midwest — land of the Great Lakes as well as thousands of smaller bodies of fresh water — as a water-war battleground. But as generations of human use and suburban sprawl have drawn down groundwater resources, the abundant water visible on the surface is, in some places, masking a deeper deficit.

That’s the case in Waukesha, Wisc., a town once known for its mineral springs. The groundwater supply in this city of 71,000 has been running low for years. As a result, naturally occurring radiation in the aquifer has reached levels that the federal government deems dangerous to public health, and the city is under a federal order to find a new source of drinking water by 2018.

This prosperous suburb of Milwaukee, which has more than doubled in population since 1960, has its eye on a very obvious solution, just 15 miles to the east: Lake Michigan, the fifth-largest body of freshwater in the world.

But the Great Lakes Basin Compact gives all eight states surrounding the five Great Lakes veto power over how the water therein is used. (The Canadian provinces of Québec and Ontario are allowed to submit comment, although they don’t have veto power.) Only communities within the Great Lakes watershed have an automatic right to the water, and Waukesha is just 1.5 miles on the western side of that line.

The city is requesting approval from members of the compact to use water from Lake Michigan and then recycle it back into the lake. It’s the first request for such a diversion since the compact was enacted in 2008, and is being closely watched by everyone who has an interest in the region’s water resources.

In a Milwaukee Journal-Sentinel op-ed, Dan Duchniak, general manager of the Waukesha water utility, argued that approving the application is a sensible solution. “Waukesha’s service area is not intended to fuel economic growth and sprawl, but to meet the needs of current residents,” he wrote, emphasizing that the city would “recycle no less than 100 percent of the volume back to the lake after treating it to standards that are stricter than those for most other dischargers to the lake or its tributaries.”

But environmentalists caution that Waukesha’s application is a crucial test case for the strength of the compact, enacted in 2008 to prevent Great Lakes water from being diverted to drier states in the booming Sun Belt. Levels in the lakes, which contain one-fifth of the fresh water in the world, have been at historically low levels in recent years due to changing weather patterns.

Jodi Habush Sinykin, an environmental attorney with Midwest Environmental Advocates, wrote her own op-ed on the issue. Like many others, she is concerned that politics will get in the way of science during the environmental review process. She noted that the Wisconsin Department of Natural Resources, which will review the application, has come under scrutiny following a drop in enforcement actions under the administration of Gov. Scott Walker — for whom the heavily Republican Waukesha is a political stronghold.

Sinykin, an expert on Wisconsin groundwater law, laid out the stakes this way:

Given the maelstrom into which Waukesha’s application will be dropped in the coming weeks, we must step up to the plate, as an informed citizenry, to support DNR scientists and staff so that they may proceed with an assessment that is comprehensive and science-based.

We are witnessing history in the making — the first request for a diversion of Great Lakes water outside the basin under the Great Lakes compact. With Wisconsin as the driver of this first review process, the precedent is ours to set.

Gary Doer, the Canadian ambassador to the United States, weighed in earlier this year on the importance of close scrutiny on Waukesha’s precedent-setting diversion application. “Today’s project may make sense, but 100 of them won’t,” he said in July. He, and everyone else with a stake in Great Lakes water, will be watching what happens in Waukesha very carefully.