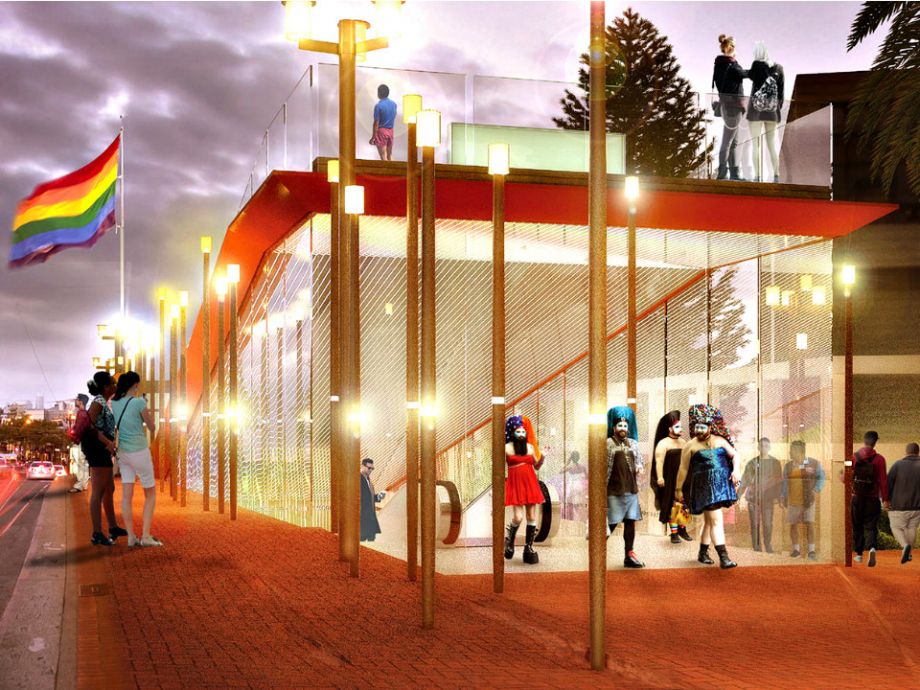 A new design for San Francisco’s Harvey Milk Plaza could transform the corner of Castro and Market streets with marches and community rallies in mind.

A team led by San Francisco-based firm Perkins Eastman, Hoodline reports, had their work chosen from a group of 33 entries and three finalists. The project team includes engineering firm Arup, graphic design firm Propp + Guerin, visual design firm Lightswitch SF, and artist Cybele Lyle. (I occasionally write for Arup.) The winning design features an amphitheater made up of stages, ramps and benches rising from the plaza — intended as a place for people to sit, but doubling as a space for gatherings and community activism. A timeline of the life of Milk, who was a San Francisco city supervisor and the first openly gay politician to be elected in California, has milestones of the LGBTQ civil rights movement. A field of LED candles to be activated at sunset would be featured throughout the plaza — acknowledging the many candlelight vigils that have been held at the intersection.

“While each of the three finalists delivered wonderful concepts for the future plaza, what set the submission from Perkins Eastman apart was their bold, immersive idea; passion for Harvey’s message; and willingness to iterate the design based on feedback during the competition process,” Andrea Aiello, president of Friends of Harvey Milk Plaza and executive director of the Castro Community Benefits District, said in a press release.

Because the plaza sits over Castro Station, Perkins Eastman has proposed changing the transit entrance to face west, thus creating a larger plaza at street level. At the station level, a meeting room would provide space for community activities.

According to SF Gate, that change could potentially add to the walking distance of commuters rushing to catch their train, but it may not be set in stone. And while the design has been chosen, its execution isn’t a sure thing. Millions in funds need to be raised, and signoffs are required by more than one agency.

However, the design is nothing if not an expression of the city’s zeitgeist — and the increasingly movement-based politics of 2017. As Jeff Risom, managing director of Gehl in the U.S., wrote in a Next City op-ed in the wake of Donald Trump’s 2016 election, “This last year has exemplified how people use the streetscape as a space for expression, revolt and protest, from Black Lives Matter to Trump rallies and the current post-election protests in urban areas. … Today, it is even more important that our streets and public spaces be used for dialogue, and exposure to other points of view, which promotes empathy and a greater ability to coexist in our physical surroundings and institutions.”