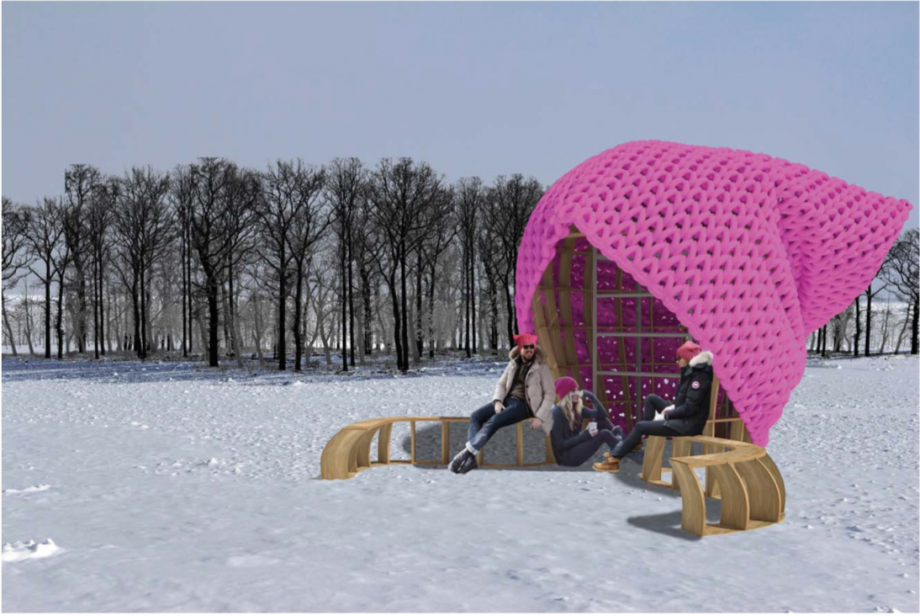 Under the theme of RIOT, a jury has chosen seven winning designs to liven up Toronto’s beachfront this winter, including a tower made of pinwheels in the shape of a nuclear reactor and a bright pink “Pussy Hut,” topped with an enormous knitted hat.

The Winter Stations International Design Competition, now in its fourth year, will run from Feb.19 to April 1, CBC news reports. During that time, lifeguard stands across several prominent Toronto beaches will be transformed into temporary installations. Four professional winners and three student winners were chosen from a pool of about 270 under a thematic umbrella of “violent disturbance; uproar; outburst of uncontrolled feelings; a large or varied display,” according to the competition’s website.

“The past year has been one of upheaval and continued uncertainty,” the website states. “Paradigms are shifting, lines of division appear to be drawn, perceptions skewed — it may feel we are losing sight of reality, or at least what we once considered normalcy. But century after century, from one era and generation to the next, what was once within the realm of fantasy and disbelief emerges to the surface proposing alternate, often conflicting realities and ways of going forward.”

This year’s installation builds on last’s year’s, which held the theme of “Catalyst” and sought to “‘open up the waterfront landscape and reinvent the space for visitors,’” while considering how materials may be repurposed or reused for future iterations,” as Arch Daily wrote at the time.

One of this year’s installations, “Wind Station” by Paul van den Berg and Joyce de Grauw of the Netherlands, fulfills the 2018 call by imagining a global nuclear phase-out in favor of renewable energy.

“Our world still counts about 450 nuclear plants, including the Pickering Stations 30 km from Toronto,” an artist statement reads. “Accidents like Tsjernobyl and Fukushima still have dramatic consequences. Why keep using a technology that is dirty, dangerous and economically unsustainable?”

The “Pussy Hut,” meanwhile, recalls the 2017 Women’s March. The hut “celebrates the symbol of the hat and expands upon it to create a warm shelter from the cold,” a statement reads. A third installation, called Obstacle, is a red, maze-like structure meant to serve as a “metaphor for the narrative of a person facing unspecific, seemingly insurmountable problems of the world, and the journey they undertake to confront and overcome those problems.”