Will They or Won’t They? The Romance Between Obama & High-Speed Rail – Next City

Will They or Won’t They? The Romance Between Obama & High-Speed Rail 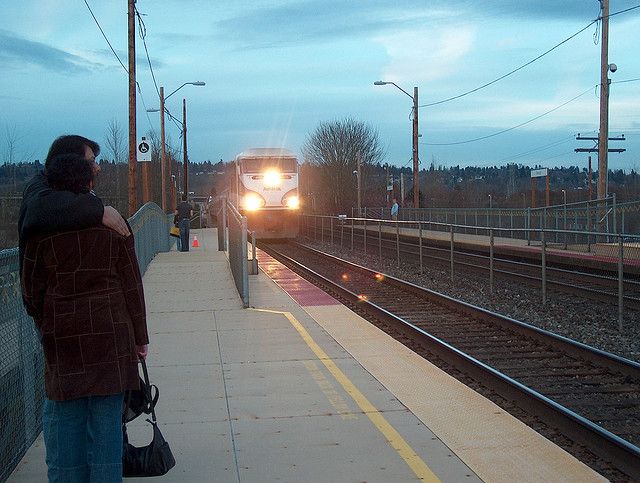 When it was just settling into power, the Obama administration scored a coup. Following up on a campaign promise, White House officials convinced Congress to agree to an unprecedented and massive infusion of funds for high-speed rail. The momentum seemed to be on side of government investments in faster trains: The public supported the proposal and competitor countries like China were developing their own plans.

The February 2009 American Recovery and Reinvestment Act (the “stimulus”) directed $8 billion for faster trains meant to speed across the country and offer an alternative to car and airplane travel. The administration hoped that the investment would mark the first step toward making intercity rail, like roadways, transit and airports, an established part of the federal government’s transportation budget. Indeed, President Obama’s first annual budget included a $1 billion additional commitment to high-speed rail — a line item the executive branch has repeated each year (in 2011, a six-year $53 billion plan was even proposed). The government went about awarding funds to projects throughout the country.

Today, while Amtrak ridership continues to increase, improvements to the rail system thus far have been too minor for most people to notice. Plans for improved service in states like Florida and Ohio have been called off. Construction on the nation’s most-heralded new line — a 220 miles-per-hour link between Los Angeles and San Francisco — has yet to begin.

Of course, compared to many other major infrastructure projects, four years is hardly enough to judge the effectiveness of a national rail program.

Outgoing Secretary of Transportation Ray LaHood has likened the administration’s high-speed rail program to the Interstate Highway System, which was initially authorized in 1956 but not completed until 1992. The president’s goals are, and always have been, long term: A 25-year “vision” to connect 80 percent of Americans to high-speed rail. It may take decades, the argument goes, but at least the government has a (rough) plan for how to move forward.

The difference, though, is that while projects like the Interstate system benefitted from a guaranteed revenue source — in that case the federal fuel tax — the Obama administration high-speed rail proposal never has. In fact, other than the $10.1 billion Washington has allocated so far, there is no other commitment from the federal government. Yet high-speed rail is incredibly expensive and there is little precedent, domestic or foreign, for private enterprise funding such investments. A 2012 Amtrak proposal for the Northeast, for instance, suggests that building tracks for truly fast trains from Washington to Boston would rack up an eye-boggling $151 billion, most of which would have to be covered by government aid.

A 2012 proposal would speed up trains between D.C. and Boston. Credit: Amtrak

Though the president mentioned high-speed rail in his State of the Union address this year, the transportation mode is absent from his new focus on urgent repairs of the nation’s infrastructure. Nationwide, the political winds suggest that there will likely be little significant progress over the next four years.

At the source of the problem is a lack of bipartisan consensus in Washington about the necessity of investment in high-speed rail. Democrats in both houses of Congress have repeatedly voted in favor of legislation expanding access to faster trains. But Republicans have used high-speed rail as a wedge issue, practically since the beginning of the Obama administration. Little has changed.

Louisiana Gov. Bobby Jindal’s Republican response to Obama’s first State of the Union address in February 2009 was a watershed moment. Given the opportunity to endorse high-speed rail as an investment in the public interest, Jindal instead included the transportation mode in his list of “wasteful spending.” The mold was set: The GOP, at least at the national level, would systematically oppose any public spending on faster trains. The merits of high-speed rail can be debated over and over, but when it comes to government investment, Republicans have made their position clear.

In 2009 and 2010, when Democrats controlled the House and Senate, Republican opposition did not affect the federal government’s program, and Congress approved additional allocations for intercity rail in both years.

Yet Democrats, consumed with developing passable health care legislation, failed to address the nation’s transportation funding crisis — and refused to set aside a dedicated source of funding for rail projects. Beginning in the late 2000s, receipts from the national gas tax had begun to decline. The result was, and continues to be, confusion about how the federal government can pay for transportation infrastructure. While certain members of Congress have argued in favor of an increase in the gas tax, the creation of a vehicle-miles traveled fee or the development of some other funding source for transportation (a part of which could be devoted to high-speed rail), the White House has repeatedly put the kibosh on those efforts, arguing that they would contradict the 2008 campaign promise not to raise taxes on families making less than $250,000 a year.

The administration instead claimed that “saved” funds from the drawdown of troops from Afghanistan and Iraq would offer new money for “nation building at home,” yet any “savings” were illusory in an era of big deficits and even bigger concerns about the deficit.

This reluctance to develop a new, reliable and guaranteed source of transportation funding put the federal high-speed rail program in trouble once Republicans retook the House of Representatives following the 2010 midterm elections. The GOP was insistent that it would not support a budget for high-speed rail, and no progress was made on increasing funding for transportation in general. With federal highway and transit funding now under threat because of the impending sequester, any hope of finding room for intercity rail diminishes by the day.

The Obama administration has been unable to address this virtual blockade on federal train funding, and continues to face considerable Republican opposition to spending anything at all on high-speed rail. The GOP’s continued control of the House until 2015 — and likely until 2017 — means that no significant federal money will be made available for rail. That should put in serious question any hopes that the Obama rail program will come to resemble the Interstate system anytime soon.

The reliance on Washington to fund high-speed rail is another significant explanation for the lack of progress so far. States are quite capable of developing their own plans for improving their rail systems, and could fund them if they wanted. During the 2000s, states like Wisconsin developed rail plans and even devoted some of their own dollars to supporting them. Once the Obama administration started handing out grants, it looked like progress on those proposals would be made.

Yet the Republican hostility to rail emanated from Washington and encouraged several Republican-dominated states to reject “free” federal funding and have chosen to concentrate their transportation investments on roads. Most other states have been reluctant to direct their own funds to this project when faced with a tepid economic recovery.

That said, several states, including Illinois and Virginia, are making incremental improvements to their rail networks thanks to federal grants. And California has taken a serious step forward toward dramatically improved rail service with full funding assembled from federal and state sources for a new line in the Central Valley (which, assuming tens of billions of dollars can be located, will eventually form the backbone of the full San Francisco-Los Angeles line). Considering the environment in Washington, that will undoubtedly be a reach. While there are pioneering efforts in Florida and Nevada, private contributions remain untested.

Unless there is some unforeseen progress in convincing Republicans of the value of rail investments, federal spending on this transportation mode will be constrained for years. The Obama administration’s plan for a U.S. high-speed rail system, then, remains little more than a vision.

Yonah Freemark runs The Transport Politic, a blog about transportation.