Will Legalized Xboxes Pull the Plug on China’s Arcades? – Next City

Will Legalized Xboxes Pull the Plug on China’s Arcades? 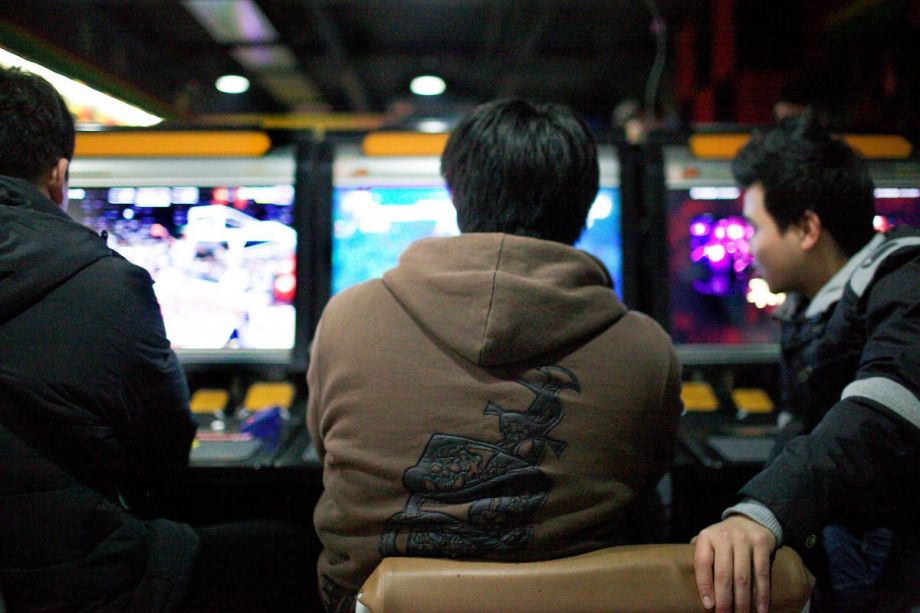 Video games in Shanghai’s arcades must be approved by the Ministry of Culture, but many operate underground. Photo credit: Don Weinland

Oblivious to the noisy teens around him, a man in his mid-forties sits quietly on a stool, puffing a cigarette as tropical fish float through the pristine water before him. Without warning, he plunges his hand toward the screen and grabs at a red barracuda. The creatures scatter instantly, clearing the golden seabed for a split second before warily returning.

Before long, the familiar “Play Again?” countdown is scrolling, and the man is digging into a plastic soda bottle filled with tokens to reboot his aquatic enterprise. The Chinese game “Fishing Joy” can double as a gambling machine, like many games in this Shanghai arcade, and I ask him if he’s playing for money.

“I’m fishing,” he says curtly, then turns away.

Shanghai is filled with arcades like this one, the Pacific Electric Entertainment Center, a smoky, cacophonous, garishly lit space on the sixth floor of a shopping mall in the Xuhui District, where young couples mow down zombies with assault rifles and older players, like our fisherman of few words, methodically rack up points as if they were sitting at slot machines. But a move by the Chinese government to lift a 14-year ban on home gaming consoles could send ripples through the country’s deep-seated arcade culture, which has persevered long after such spaces in much Western world cities were picked off, zombie-style, by the Nintendo and Sega booms of the 1990s.

The console ban was put in place in 2000 — officials cited concerns about the machines’ effects on the mental health of Chinese youth — and today, every arcade game in China must possess a sticker to show it’ s been approved by the Ministry of Culture. But despite the imprimatur of officialdom, many of these arcades operate in a regulatory gray area. On-site management at Pacific Electric is loathe to take questions about their operation, and staff say they don’t know who the owner is. At one nearly empty arcade in Shanghai’s Huangpu District, Shendu Games, the young man behind the counter became irritated when asked for the owner’s phone number, saying sharply, “He doesn’t have a way to be contacted,” before asking me to leave.

Such is the customer service at these gritty establishments, where faux leather jackets are the unofficial dress code, and even decades-old games like Time Crisis, a comically outdated Uzi shoot-‘em-up, are still popular. But these official arcades are practically Disney-clean compared to the shadier venues that operate off the books, in basements throughout Shanghai, out of sight of the police. Such unregistered arcades can be found in all big Chinese cities, and are generally havens for criminal enterprise. Chinese media report that a black market has emerged for the winnable game tickets, and the illegal arcades are rife with drug use and mob activity. In mid-December, two men were found dead on the floor of an unregistered arcade on the outskirts of Shanghai’s financial district, Pudong, in an apparent double-murder. Both had sustained severe head injuries, and local papers ran sensational coverage of the crime, including photos of the unmarked steel door in the alley that served as the main entrance for the now-shuttered gaming venue.

Arcade games, especially those that allow players to gamble, attract all ages.

Chinese newspapers are rife with these stories. In September, an intermediate court in the western city of Xian charged 34 people with operating a crime syndicate and a gambling ring using arcades as a front, according to Sina News. Since 2008, the business allegedly brought in $19.8 million with 26 arcades. Members of the syndicate reportedly attacked the police with butcher knifes before being subdued. State media have paraded the case as a warning about the myriad underground arcades-cum-casinos luring in young people and their cash.

But such stories may soon become a thing of the past. As China’s economy opens up and its middle class rises, public gaming in communal settings seems to be going the way of the rickshaw. The heyday of Chinese arcades began in the 1980s, when the halls popped up near schools around the country, according to Huang Hai, general manager of StimDream Network Technology, a Shanghai-based game developer. These were joined a decade later by internet cafes, which became a focal point of the teenage urban social scene. But as home computers proliferated, gaming moved into bedrooms and living rooms. Many internet cafes have recently closed, and the arcades are “less frequented because… players have their own PCs,” says Huang.

The home gaming consoles that will soon find their way into homes in Shanghai may only speed up this trend. Right now the black-market consoles available from electronics vendors have anti-piracy controls that prevent them from connecting to the internet. At Cybermart, a four-story electronics market in the heart of the Huangpu District, a vendor surnamed Zhou tells me none of her Xbox One consoles, Microsoft’s latest, can get online. But she promises she’ll have the newly legal consoles in about six months, ready to connect, offering Chinese youth yet another way to congregate in “massively multiplayer online role-playing games” (MMORPGs) instead of in public. 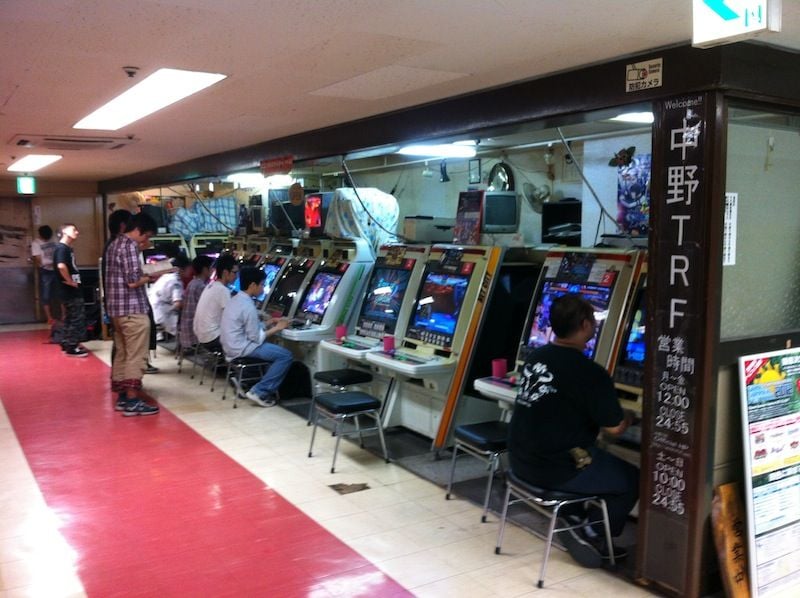 Though China recently legalized home gaming consoles, a demographic shift may save the arcade scene.

In the end, however, the lifting of the ban will likely have less of an effect than it would have had just a few years ago, because today, as Zhou says, “Chinese kids play internet games with their phones.” In a way, during the years that China kept a lid on home video game consoles, the gaming world moved on, and Chinese gamers have simply leap-frogged the console technology, moving straight to smart-phone-based games. “I personally believe the future development trend is certainly towards mobile gaming,” says Huang. “Mainly, casual players find their way to the arcades in the malls while shopping,” no longer treating them as a destination in their own right.

The data bears this out: nearly half of all mobile phone owners in China use their phones to play games, according to the China Internet Network Information Center. And those numbers are likely to rise, with China representing the biggest mobile phone market in the world. In 2014, Chinese consumers are expected to buy 400 million smart phones, which will connect to the country’s rapidly upgrading mobile data networks.

This shift to gaming on private devices parallels a more general trend of Chinese social life. Especially among younger generations, conversations that Chinese may have traditionally held over mahjong or tea are, like in much of the world, now occurring in chat rooms and via text. But China’s hoards of internet users — by far the largest group of netizens in the world — belie a growing split between those who have access and those who don’t. While about half the country, some 600 million people, are estimated to be browsing the internet in China, the other half remains unconnected, says Guo Hua, a sociology professor at the Chinese University of Hong Kong.

“The astonishing size [of the internet-connected population] conceals that more than half of China’s population does not use internet,” Guo says. “This huge digital divide suggests social isolation for those having no access to internet. These people are also from social strata that might be very often neglected and disadvantaged in society.”

This is part of why Mark J. P. Wolf, professor of communications at Concordia University in Wisconsin and author of The Medium of the Video Game, believes it’s premature to write the obituary for the humble Chinese arcade. He foresees a shift in which arcades fill a gap for people who can’t afford an Xbox or a smart phone. As China’s urbanization movement pushes low-income farmers into cities by the millions, those new arrivals could become a broad new customer base that reinvigorates China’s arcades. “In China, where fewer people can afford consoles and where society is more collective in general, I imagine arcades may retain more of a foothold and last longer than they did here [in the United States],” says Wolf, “even with the same competing forces.” With just under half of China’s population still living in the countryside, the dirty, disreputable business of arcade gaming may have a replay left in it yet.

Support for international reporting in this article was made possible by the Ford Foundation.