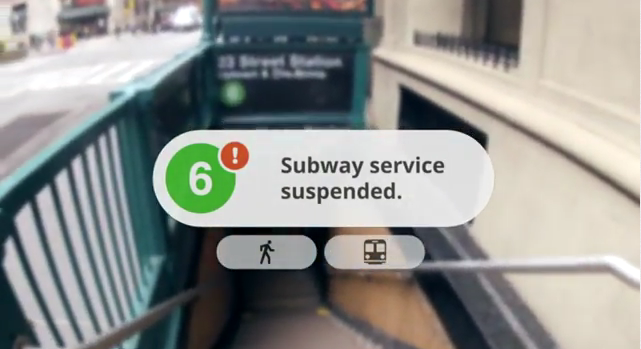 While this writer thought Metro Cuffs were convenient, with public transit lines readily available on your wrists, Google is taking urban navigation and social media to the next level. Project Glass, Google’s first foray into eyewear, enables wearers to stream information typically found on smart phones directly from their lenses in real time.

The physical frame itself is surprisingly accessible, similar to a sleeker variety of Oakleys rather than to any Terminator-style frames you might have in mind. And with a price tag around the same range as current smart phones, will these glasses affect the way people navigate cities?

According to CNN, the product is far from finished, and Google actually only publicly announced the initiative to gather feedback before its official launch. With features like GPS and motion-sensors, the wearer will be able to find relevant information about what’s being observed, allowing for easy access to local points of interest. The glasses will also include a built-in camera to record videos and take pictures, as well as voice command control for constant seamless hands-free support.

Google’s new initiative seems to specifically target urbanites in more transit-oriented cities. The launch video presents a scenario where the wearer wants to meet his friend at a bookstore in New York, but is informed that his initial train route is no longer an option due to construction. The glasses then suggest another walkable route.

While making information more accessible for residents to promote walking and public transit, will these glasses be safe for commuters choosing other means of transportation, such as cycling or driving?

Parody videos have naturally emerged, with such titles as “Google Glasses: A New Way to Hurt Yourself.” Though jokes, these videos highlight significant issues with traveling while constantly streaming information, such as looking up the weather and attempting to call a friend, which serves as a visible distraction from one’s surroundings.

However, one wearer who tried the glasses disagrees, telling the New York Times, “They let technology get out of your way. If I want to take a picture I don’t have to reach into my pocket and take out my phone; I just press a button at the top of the glasses and that’s it.”

Interestingly enough, tech-induced distractions are a growing concern for cities. In an effort to lightly address the emergence of inattentive pedestrians, Philadelphia Mayor Michael Nutter designated specific sidewalk lanes for the “digitally distracted,” establishing “e-lanes” for chronic texters and music listeners as an April Fool’s joke.

If it succeeds in better integrating digital information into everyday life, then maybe a product like Project Glass could actually ease some of the modern-day burdens of technology. Alternately, it might add to all the white noise vying for your attention.