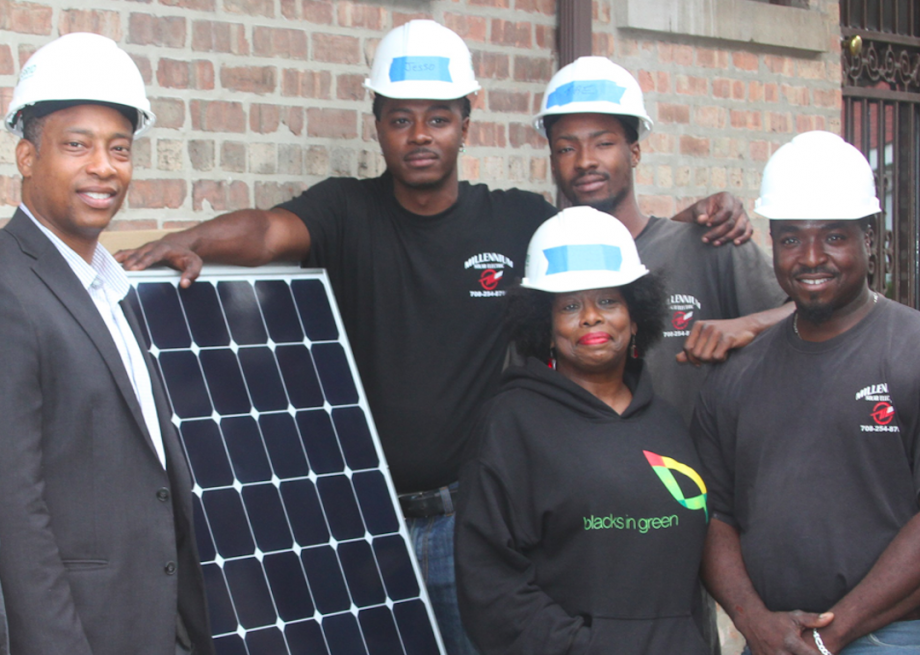 Brandon House grew up in Hazel Crest, a suburb located in the far south of the Chicagoland region. Now 28, he originally set out to pursue work as a conventional electrician, with less than overwhelming success.

“It was difficult for me to find a broader level of employment, and the employment I was finding wasn’t as specialized,” House says. “It might just be general labor type work. I might find apprentice level work but that would be it. I didn’t necessarily bring too much to the table as far as skills or what else other people were willing to teach me.”

Today, House is not only a licensed electrician but also a solar panel installer certified by the North American Board of Certified Electrical Practitioners (NABCEP). In 2017, he founded his own company, Advanced Energy Innovations, LLC. And now, the path to where he is today will become even wider, thanks to state funding kicking in to support job training programs like those that paved the way for House.

Completing the solar panel instruction program with Millennium Solar proved to be a turning point for House. It prepared him to pursue NABCEP certification, with encouragement from Williams, who also helped him prepare for the rigorous exam.

“After the training it gave me a tool bag of tools and specialized skills so I was qualified to apply for more electrician jobs whether they be for installers or construction work or maintenance work. It gave me more credibility to apply for … solar installer, solar technician and electrician positions within solar companies,” House says. “It opened the door to a bigger variety of positions. Where before I might have just been on the electrician career path, now I am a licensed electrician and NABCEP certified solar installer so I do have more options ahead of me.”

The industry goes way back in Williams’ family. He’s a third-generation International Brotherhood of Electrical Workers (IBEW)-licensed electrician and one of the few photovoltaic technicians in the far south suburbs of Chicago. He launched Millennium Solar in 2000. In addition to running the company, Williams provides solar panel installation through the CONSTRUCT program, administered by Commonwealth Edison (the Chicago metro electric utility).

Millennium Solar will now offer its installer training throughout the Chicagoland area in partnership with Blacks in Green, with support from a grant via the Illinois Future Energy Jobs Act of 2016 to expand and promote jobs training programs targeting residentsof low-income communities, ex-offenders and individuals aging out of the foster care system.

Based on the south side of Chicago, Blacks in Green is a nonprofit community development corporation seeking to create self-sustaining and healthy black communities using the new green economy. Its founder, Naomi Davis, has been profiled by the New York Times and Chicago Magazine — which labeled her “The Visionary.”

Getting the state funding represents a major milestone in a long-term goal of Black in Green to leverage sustainability into an economic engine for communities of color and others who typically do not share in the advantages of innovation. It was not achieved without a fight, and the fight is not over, according to Davis.

“Blacks are 15.3 percent of Illinoisans, but 96.5 percent of [solar] jobs are not held by African Americans,” Davis points out.

The Solar Energy Industries Association the 250,000 people currently employed in solar will grow to 422,000 by 2022. Nonetheless, Davis argues, those job opportunities are not equally available to people of color, and especially African Americans.That’s largely why Blacks in Green is also leading the Jobs & Economic Opportunity Committee of the Steering Committee of the Illinois Clean Jobs Coalition.

“We are presently pressing for state or philanthropic funding to pay for staff time in documenting, tracking, and reporting [on the impact of these programs],” Davis says.

Blacks in Green will begin training its first state-funded cohort of up to 25 students on May 21, 2018. With state funding, Blacks in Green will be able to provide salaries for instructors for the training sessions. The program will still be provided at no cost to students, who will also receive a stipend, transportation assistance and job placement assistance. To be eligible, candidates must be at least 18 years old, have a valid ID and be eligible to work in the United States. A high school diploma or GED is preferable but not required.

Despite efforts by the Trump Administration to roll back environmental protections and renewable energy initiatives instituted by President Barack Obama, the prevailing consensus around the south side of Chicago and its suburbs is that carbon based fuels do not represent the future. In fact, as the costs of renewable energy continue to decline, clean energy, especially solar energy, will not only be more environmentally friendly, there’s even more hope will become economically viable. Williams expects the demand for trained solar installers will accelerate exponentially.

“Once the [solar] market explodes, we will have to be ready to go. This is where the market is actually going, so it’s important for [the trainees in these programs] to understand and be a part of it,” Williams says.