Why You Shouldn’t Underestimate a Tech Startup From Newark 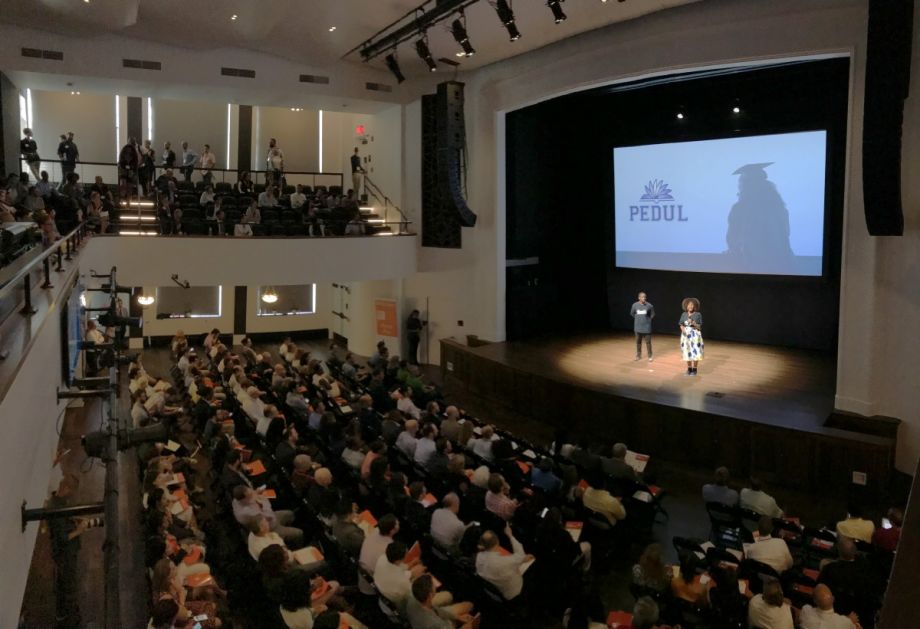 When it came to the idea of Newark, New Jersey, being a tech hub, the first people Kayla Jackson and Chisa Egbelu needed to convince was themselves. Then they had to convince their families. Three years into building Pedul, an online scholarship marketplace for college students, they’ve gone on to convince a growing community of peers and followers who now see in them a future they’d never before imagined for New Jersey’s largest city.

You could hear that growing community cheer them on as they took the stage last Tuesday at the sixth demo day for NVP Labs. The event is the capstone of this 12-week accelerator program of Newark Venture Partners, an early-stage venture capital fund based in the New Jersey city. With all due respect to the eight other startups who made their pitch onstage that day, Pedul was the only one that seemed to have brought along its own entourage. It’s no surprise, given it is the first startup founded in Newark in the venture capital fund’s portfolio of 65 companies.

Despite the warm reception at the demo day, it still remains rare to see a startup with black founders celebrated in the worlds of venture capital and tech startups. Black women, for example, have raised only .0006 percent of the $424.7 billion in total tech venture funding raised since 2009.

One startup from Newark led by two black co-founders alone does not do much to move the needle on the racial disparities in the tech world, the venture capital world or the city of Newark. But there are some signaling and network effects to consider. A moment like this provides an opportunity to plant some seeds that, with intentional support from others, could grow into a kind of tech ecosystem that has more local roots and bears more fruit for more diverse startups in a city that still hasn’t convinced everyone that it is more than just one of the many places that went up in flames in the late 1960s in response to persistent, systemic racial injustice.

“Systemically, there are some reasons as to why a lot of the students we speak to in Newark or any city still feel like they need to get out of it to be a success,” Jackson tells Next City. “I think what’s beautiful is a lot of people are now realizing that there is a way for them to grow here, and they’re seeing avenues and pathways when they’re having conversations with Chisa and me. That’s part of our hope and dream is that we can be pioneers for a new conversation, a new narrative about what’s possible coming out of our city and where we can go as a city without taking away the heart and the culture that the city has always had to offer.”

Both cities also made public sector investments in fiber optic networks with an eye toward leveraging them as an asset for private sector growth. Vice called Chattanooga “the city that was saved by the internet.” Newark’s fiber optic investment is more recent, and it played a key role in the city’s bid for Amazon HQ2.

The current narrative of Newark as a tech hub goes back to 2007, when then-Mayor Cory Booker convinced the burgeoning audiobook platform Audible to move its headquarters from nearby suburban Wayne, N.J., to downtown Newark. The company is still there today, at One Washington Park, next door to the Newark Public Library’s central branch and two doors down from the landmark former Second Presbyterian Church. Audible recently acquired the church and renovated the interior into an extension of its offices, preserving the exterior. Dubbed the “Innovation Cathedral,” it re-opened earlier this year, and last week its theater hosted the NVP Labs demo day for the first time.

As the Newark tech sector narrative progresses, it’s not the only narrative at play. The city’s prior history looms large, from the late 1960s uprisings, to the ravages of the interstate highway system that sliced through vast sections of the city, to continued redlining. Pushing for growth in a new sector means navigating the tensions between supporting homegrown startups versus bringing in startups from outside Newark; building housing for additional residents versus preserving homeownership and housing for existing residents; and the challenges of connecting Newark residents to the new economic opportunities tied to any new jobs and residents the tech sector may create.

Time is also a factor to consider. Despite what seems like the fast-paced world of venture capital and tech companies, it still takes time for tech companies to grow into true employment powerhouses. Most of them fail, and those that succeed don’t need to have all their employees in one place. Audible has offices in eight countries, and more than a decade after moving into its 410,000 square-foot building in downtown Newark, there is still enough spare space to also house the offices of Newark Venture Partners as well as the fund’s portfolio companies.

Launched in 2016, Newark Venture Partners is somewhat unique among venture capital firms in its combination of place-based investment focus and place-based investors — all large, mostly recognizable corporations with headquarters or a significant presence in Newark, including Audible, Horizon Blue Cross Blue Shield, Prudential, Panasonic, RWJBarnabas, TD Bank and Dun & Bradstreet. The state of New Jersey also chipped in some capital, through the N.J. Economic Development Authority.

Most venture capital funds pool dollars from pension funds, other retirement accounts, foundation endowments, university endowments or wealthy individuals from all over the country and the world. Some corporations seed their own internal venture capital funds to invest in startups whose technologies could eventually improve their bottom lines. As a venture capital fund with multiple place-based stakeholders, Newark Venture Partners looks to invest in startups with technologies relevant to any of their investors — and in so doing, hopefully convince them to move to Newark.

So far, of its 65 portfolio companies (including six NVP Labs cohorts), the fund reports that 31 still maintain a presence in the “Brick City” — including fourteen that have chosen to join Pedul and set up their headquarters in Newark. Others, like supply-chain monitoring automation company Sensor Transport, haven’t moved to Newark, but in being part of NVP Labs have made key connections to expand their business through New Jersey-based business partners.

That amount of cash isn’t meaningless, but it is less than a rounding error compared to the wealth that Newark-based corporations control. Prudential alone, the insurance giant founded in 1875, today controls $1.4 trillion in financial assets.

Bringing more of those assets back into Newark itself is a tall task, and doing it as a venture fund, through the tech sector, means being pulled in multiple directions on a daily basis. Joanne Lin lives out those tensions every day. As principal at Newark Venture Partners, she oversees the fund’s direct investments — those made outside of NVP Labs.

Over the course of a year, Lin estimates that she looks at around a thousand startups, narrowing them down to make two or maybe three direct investments in any given year. Meanwhile, for its sixth cohort, NVP Labs looked at around 2,100 startups before narrowing them down to the nine who participated and pitched at demo day last week. Those are slim chances for a startup from any one place to make it into the fund’s portfolio.

“We talk to startups all over the state, all over the country,” Lin says. “We try to elevate the core aspects of Newark that make it a high potential place to be for a next wave of startups. There’s the fiber, the rail lines up and down the east coast, the concentration of potential customers and clients in the New York City region. We’re also offering you free space and access to hands-on investors who are invested in your success.”

Like any venture capital fund under today’s investor expectations, Newark Venture Partners needs to deploy the funds it receives within a reasonable time frame, say three to five years. That means, “when it comes to external versus homegrown startups, there’s a time constraint,” Lin says. “We’re doing what we can to build up the tech ecosystem right now by supporting a generation of early stage startups, but they may be coming from all over the place to Newark.”

That ecosystem extends beyond the startups themselves, to groups like Per Scholas or the New Jersey All-Stars Project, who have different models of workforce development working with students and others in Newark to prepare them for jobs that may be available as a result of new growth in software development or information technology firms, jobs that may not exist yet.

There’s also more established institutions like NJIT and Rutgers University, who have had some of their own challenges making connections with Newarkers. On the one hand, even though it is located in Newark, only two percent of NJIT students are from Newark; on the other hand, Jackson and Egbelu are recent Rutgers graduates.

“We’re working with those groups on increasing the talent development pipeline, connecting their graduates when our portfolio companies are looking to hire,” Lin says.

But the weight of making sure Newark’s tech sector comes to benefit existing Newarkers can’t fall entirely on just one startup or just one venture capital fund. There’s a role for Newark public schools, which continue to expand computer science education; there’s a role for the Newark Housing Authority, which has made efforts to bring computer science education to public housing communities across the city.

These historically disinvested communities “want to be a part of the tech sector — the jobs, education, the amenities, and not in a trickle-down kind of way necessarily,” says Newark-native Isaiah “Zay” Little, who among many hats helps organize Code for Newark to help connect the city’s tech sector to government and community partners outside the usual suspects downtown.

Informal channels, like the regular “Founders’ Cafe” peer gatherings that Jackson and Egbelu organize on a quarterly basis, also have a key role to play. It’s these kinds of gatherings that nourish the relationships to help ensure that, instead of tearing apart Newark’s existing social connections, the tech sector builds on those connections as it grows. These social connections help explain why it might not be too long before Newark Venture Partners’ portfolio contains a lot more homegrown startups.

“For the first time, we feel like we actually have a pretty strategic say in where certain investment dollars are going,” Egbelu says. “We’re able to make warm intros to [Newark Venture Partners], we’re able to intro them to our peers, people who we came up with, who we went to Rutgers with. We have people in the final round of interviews for the next cohort.”