Why We Struggle to Talk About Gentrification – Next City

Why We Struggle to Talk About Gentrification 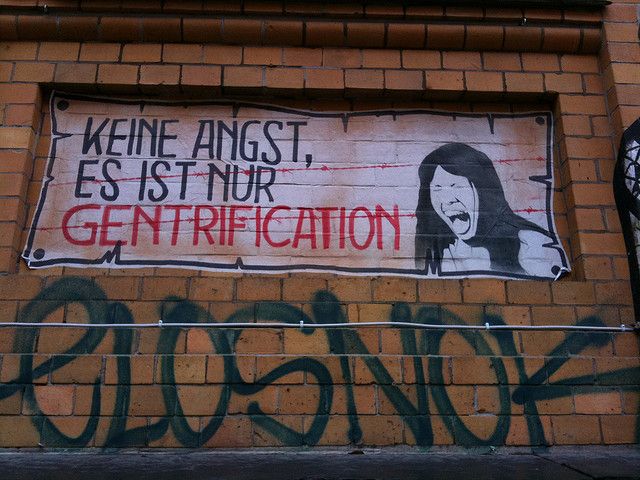 The BMW Guggenheim Lab’s arrival in Berlin fanned the flames of controversy over gentrification in the German capital. Credit: Sebastian Thiele on Flickr

“If the pain of displacement is not a central component of what we are dealing with in studying gentrification — indeed, is not what brings us to the subject in the first place — we are not just missing one factor in a multi-factorial equation; we are missing the central point that needs to be addressed.”

These are the words of Peter Marcuse, acclaimed planner, lawyer and professor emeritus of urban planning at Columbia University, whose work in the study of urban development over the past several decades has sought to turn the conversation from one about technical systematic arrangements to one that deals with issues of justice and equality.

The words were in response to a series of articles in which two prominent researchers, Tom Slater and Chris Hamnett, faced off over academic approaches to the study of gentrification. But they are a poignant and decisive reminder of where many conversations about gentrification go wrong — namely, that we forget why we started talking about it in the first place.

As such, they seem an appropriate place to start the conversation around issues of affordability and gentrification in Berlin. After all, the last thing we want to do is make the same mistakes that others have in the past. Just as important as figuring out where to start is figuring out where not to start.

According to Tom Slater, the unabashedly subjective professor of human geography at the University of Edinburgh and co-author of what was hailed as the first textbook on the subject, Gentrification (mildly critiqued in the academic world for its brazen anti-gentrification agenda), the seemingly obvious and easiest place to start the conversation — the “why” and “what” — is precisely the wrong approach.

In a 2006 article in the Journal of Urban and Regional Research, Slater starkly criticizes the academic world for shifting the conversation about gentrification not only from a critical and disapproving one to a more celebratory one, but also to a conversation that revolves more around the gentrifiers than the gentrified.

“The perception is no longer about rent increases, landlord harassment and working-class displacement, but rather street-level spectacles, trendy bars and cafes, i-Pods, social diversity and funky clothing outlets,” he writes, noting that two research trends have led the charge in this shift.

The first, he says, is treating the situation “as if the middle classes are the only characters occupying the stage of the gentrification, with the working-class backstage, both perennial understudies and perennially understudied. This is particularly disappointing, for middle-class gentri?ers are, of course, only one part of a much larger story.”

He writes: “There is next to nothing published on the experiences of non-gentrifying groups living in the neighbourhoods into which the much-researched cosmopolitan middle classes are arriving en masse.”

The second trend, he writes, “is the infatuation with how to define the process, and whether we should remain faithful to Ruth Glass’s (1964) coinage.”

In short, we have become so fixated on studying the causes of gentrification and squabbling over how it should be defined that we forget the reason we ever started talking about it in the first place — the effects.

Though Slater puts forward three reasons that these trends have come into existence, one of them I find particularly interesting and relevant: That displacement is, for many, a nearly impossibly unquantifiable and unapproachable phenomenon.

“Displacement is and always will be vital to an understanding of gentrification, in terms of retaining definitional coherence and of retaining a critical perspective on the process,” he writes. But, as researchers like Rowland Atkinson have remarked, the task of quantifying displacement is akin to “measuring the invisible.” Slater quotes Kathe Newman and Elvin Wyly, writing: “In short, it is difficult to ?nd people who have been displaced, particularly if those people are poor… . By de?nition, displaced residents have disappeared from the very places where researchers and census-takers go to look for them.”

In other words, the story of gentrification in Berlin and elsewhere will not be told in numbers. The numbers don’t exist. This is perhaps one of the reasons that politicians so often struggle even to begin to tackle the issue of gentrification and displacement — policy as we know it today is largely built around data, not anecdotes.

But I don’t believe that the qualitative is inconsequential or trivial; if the numbers aren’t there, then there needs to be another compelling way to tell the story. Which means I need more help from Berliners than I thought I might to find certain answers.

Where are the Berliners going who can no longer afford to live in the neighborhoods they have previously been in — who have already been pushed out? Are you one of these people, or do you know anyone who would be willing to help me, and hopefully others, learn how their lives have been affected?