Why This Time Could Be Different for Congestion Pricing in NYC 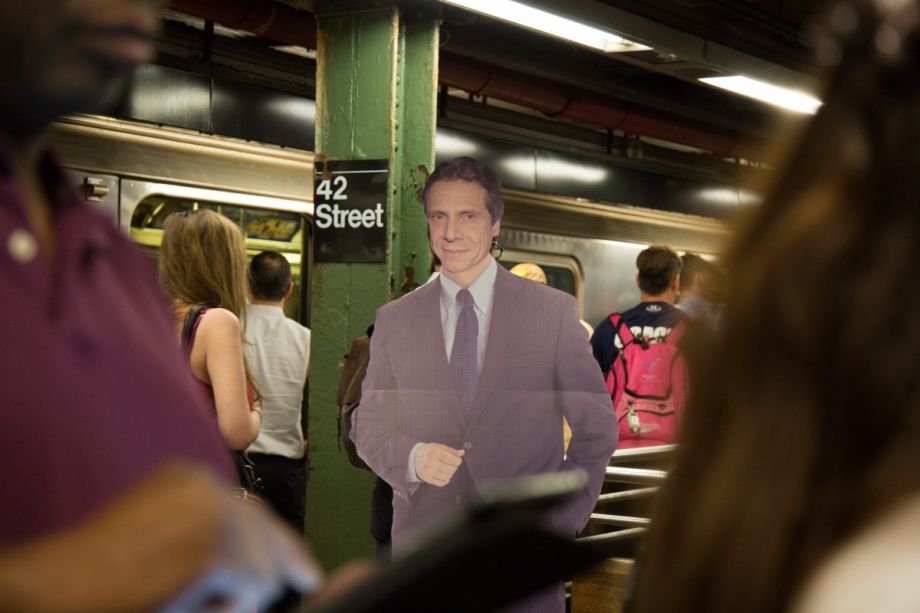 It was July 2015, and an outspoken group of New York City’s transit riders were angry with New York Governor Andrew Cuomo. These frustrated straphangers, members of the Riders Alliance, had just gotten word of Cuomo’s refusal to adequately fund the Metropolitan Transportation Authority’s (MTA’s) four-year capital plan. When Cuomo ignored the Alliance’s invitation to ride the subways with them so he could witness the travel inconveniences they experience, the advocates made a cardboard cutout of the governor and took “Cardboard Cuomo” on an underground journey around the city.

“We couldn’t get actual Governor Cuomo to ride the subway with us, so we did the next best thing,” recalls John Raskin, executive director of the Riders Alliance, a citywide grassroots membership organization with a network of some 50,000 transit advocates. From creating Cuomo-centric Twitter hashtags and Instagram accounts to organizing regular rallies in Albany, Alliance members have actively been demanding that the State do more to improve a public transit system that plagues riders of all stripes with delays and overcrowding.

It seems that Cuomo is finally stepping up to the plate, as state officials consider voting on his new congestion fee proposal, aimed at reducing gridlock in Manhattan’s central business district, while also generating a dedicated source of revenue to repair and modernize New York City’s floundering mass transit system.

Previous congestion proposals have either died in the state legislature, as in the case of Mayor Michael Bloomberg’s plan in 2008, or won only partial approval, as with former MTA Chairman Richard Ravitch’s MTA Rescue Plan.

Details of Cuomo’s congestion plan are spelled out in a January 2018 report produced and released by the Fix NYC Advisory Panel, a group of government officials and community and business leaders that the governor convened in the fall of 2017. New York state legislators have until April 1 to decide if the plan will be included in the state’s 2019 fiscal year budget. While not directly a part of the state’s budgetary decisions, New York City Mayor Bill De Blasio has voiced his support of Cuomo’s proposal — a rare instance of agreement between the mayor and the governor.

Unlike Bloomberg’s 2007 proposal, the Fix NYC plan is divided into three phases. Phase One would focus on improving transit service and connectivity in Manhattan and around the city, and would require the NYPD to step up enforcement of the city’s existing traffic laws. The second phase would introduce a surcharge to taxi and for-hire vehicular trips in Manhattan’s central business district, once, over the course of 10 months, the appropriate GPS technology is installed in cars. Phase three would establish a zone-based pricing program — first for trucks, then for all vehicles, that travel through Manhattan below 60th Street. The report predicts that the fee system could potentially generate between one and two billion dollars annually.

“It’s a strong proposal,” says Raskin — who stressed that, for congestion pricing to work, all three phases of the plan must be carried out in full. “Any credible solution to the crisis in transit service will require modernization of some very outdated equipment —and there is no serious way to do that on the cheap,” he said. “It’s going to take billions of dollars.”

Upgrading the subway’s outdated signal technology, running more trains during rush hour, and introducing a new fleet of modernized trains should be the MTA’s priorities in deciding how to spend new funds, Raskin notes. The city’s buses also need attention, he says — for starters, there should be better police enforcement of traffic laws that keep private cars out of dedicated bus lanes.

Historically, congestion pricing in New York City has proven to be controversial, with certain elected officials and others claiming that it would place an undue financial burden on middle- and lower-income people who regularly travel into and out of Manhattan by car. Bloomberg’s congestion pricing plan — a signature proposal of Bloomberg’s PlaNYC — fell through in 2008 when Democrats declined to put the bill to a vote in the State Assembly. Some state legislators deemed it a regressive tax that would financially hurt hardworking taxpayers of the outer boroughs.

Ten years later, some advocates and planners say that time is of the essence for implementing congestion pricing in order to collect funds for the city’s ailing public transit system. “It’s a plan whose time has come,” said Dani Simons, vice president of strategic communications at the Regional Plan Association, who presented the 2007 congestion pricing plan to NYC Community Boards while in a previous role at the New York City Department of Transportation.

New York commuters face uncertainty as they experience the negative impacts of an underinvested subway system whose ridership keeps growing, Simons added. “If we had gotten congestion pricing passed [in 2008],” she says, “we would have 21st century subways now.”

Simons is hopeful that this new congestion plan will be approved — since, unlike last time, the Fix NYC plan originates from the Governor’s office. “A lot of the power rests with the state in terms of the legislation that is needed to enable this,” Simons explains.

Simons and about a dozen of her RPA colleagues and board members met with state legislators in Albany on March 6 to present the Association’s Fourth Regional Plan, and, in particular, discuss congestion pricing. According to Simons, while it’s too early to tell whether the state will vote for the congestion plan’s inclusion in the 2019 Executive Budget, the legislators are “hungry to see some draft legislation.”

“There’s an openness, and I think an understanding now like never before, that the subways are in a crisis state,” she says.

Cuomo’s congestion fee has a good shot at getting passed, Raskin says, because the Fix NYC plan is focused on socioeconomic fairness. Countering the views of congestion pricing’s opponents, a 2017 analysis by the Community Service Society reveals that just four percent of the city’s non-Manhattan working residents commute into Manhattan by car and could be hit with the congestion fee. Fifty-six percent of outer-borough residents, meanwhile, use public transit to commute to work in Manhattan and elsewhere, according to the study. Other research shows that across the city, even in the outer boroughs, households that own cars have a higher median income than households without cars.

“The most regressive transportation policy, in a sense, is the status quo,” Raskin said, “where the poorest people in the city have to budget extra time they don’t have because of an unreliable transit system, and suffer the worst consequences when the train is delayed or the bus doesn’t come.”

EDITOR’S NOTE: The original version of this article misstated Dani Simon’s role with regard to the 2007 congestion pricing plan. We’ve corrected the error.