Why the Terrorists Chose Volgograd – Next City

Why the Terrorists Chose Volgograd 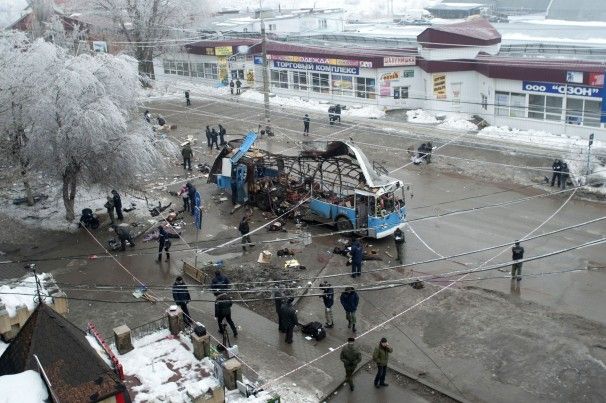 The trolleybus that was blown up on December 30 in Volgograd.

In the Russian city of Volgograd, two bombs have exploded in the past week, killing at least 34 and throwing into chaos the closest large city to Sochi, site of next month’s Winter Olympics.

Volgograd has a long history of violence. Originally Tsaritsyn, it was a key southern outpost founded in the 16th century to serve as the guardian of the Volga River and a gateway to the Caucasus. It location at the empire’s underbelly also meant it was repeatedly subject to attack. The peasant rebel Stenka Razin held it for a month in 1670, and it was repeatedly sacked by Cossack chieftains in the 18th century. But it is perhaps best known for the Battle of Stalingrad (the city was renamed for the Russian dictator in 1925), one of the bloodiest conflicts in human history, resulting in 850,000 casualties and building-to-building fighting that reduced the city to rubble. The Red Army’s victory in February 1943 here turned the tide of World War II. This blood-soaked battle is so central to the city’s identity, in fact, that last year local officials ruled that every February, Volgograd would be renamed Stalingrad for six days to commemorate the victory.

Today, Volgograd has become a battleground yet again, but this time the military front lacks definition and the targets could be anyone. The enemy moves silently and the attacks are sudden and intermittent. They serve no strategic purpose nor seek to capture territory. Rather, their impact is affective: to spread terror to disrupt the workings of the modern city.

Suicide bombers have hit Volgograd three times in the last three months. In late October, Nadia Asiyalova blew herself up on a bus, killing six. Then, on December 29, Pavel Pechenkin killed 17 in Volgograd’s main train station. The next day another bomber blew up a trolleybus as it left a stop during rush hour; so far 16 people are dead. Over a hundred were wounded in the two attacks. “It was when many people go to work. The trolleybus was literally torn to pieces and there were many human body parts. Five people lay dead on the bus and many more human remains,” said a witness.

The tactic of spreading terror has worked. Daily life is disrupted. Volgograd’s public transportation is empty as are many shops. The city administration banned the use of fireworks during New Year’s celebrations. “People are panicked,” Alexander Koblikov, regional coordinator for the Union of Volunteers of Russia told the Wall Street Journal. “A lot of stores and malls are closed… There are patrols in the streets.” Indeed, Putin placed the entire country on high alert with thousands of security personnel fanning out across Russia’s cities and transportation lines. Over 5,000 police have been deployed in Volgograd alone, and security agents are carrying out “Whirlwind Anti-Terror,” a special operation to verify residency documents. After a few days of silence, President Putin promised “to fight against terrorists until their total destruction” in his New Year’s address.

But not everyone trusts that the authorities will keep their promises. Terrorism is hardly new to Russia and it’s almost a daily occurrence in the North Caucasus. Fears and frustrations are bound to boil over. For example, shortly after the trolleybus bombing, around 200 people gathered in a “people’s assembly” that was quickly organized on Vkontake, the Russian Facebook, to demand the dismissal of the region’s governor and Volgograd’s mayor. Fearing a repeat of Biryulyovo, the Moscow race riot in October, the police squashed the gathering and arrested 50.

In a poignant editorial, the editors of Gazeta.ru charged that the security forces were more determined to protect the regime than the average citizen. “The problem is that authorities, who predominantly comprise of former and active representatives of the security forces, understand security as the regime’s security and not that of the average citizen. The residents of Volgograd will not be completely calmed by reports of the FSB (the Federal Security Service) on ‘the liquidation of the wahabbi Sokolov’ (i.e. Dmitry Sokolov, the husband of Nadia Asiyalova and suspected mastermind of the first Volgograd bombing in October who was killed by security agents in November) after the bombing, especially when two more have occurred in the city. In addition, the high command of the security forces aren’t held responsible for these failures.” Instead the regime was efficient when it came to neutralizing its “peaceful opponents” – i.e. the opposition – but “wastes its efforts and money in the fight with those who blow people up in broad daylight.”

This is the goal of Doku Umarov, the self-proclaimed “Emir of the Caucasus,” Russia’s most wanted terrorist. By turning the city into a battlefield he seeks to disrupt Russians’ normal life and throw the government and society into disarray in the run up to the Sochi Olympics. Umarov announced in July, “Today we must show those who live in the Kremlin … that our kindness is not weakness. They plan to hold the Olympics on the bones of our ancestors, on the bones of many, many dead Muslims buried on our land by the Black Sea. We as mujahadeen are required not to allow that, using any methods that Allah allows us.” By “bones of our ancestors” Umarov was referencing the ethnic cleansing of the Circassians from the Sochi area, as well as Russia’s continued military domination of the region that began in the early 19th century. The most recent attacks come less than two months before the opening of the Olympics in Sochi and a mere two days after Islam Atiev, a close lieutenant of Umarov’s, was killed in an anti-terrorist operation.

But other than its proximity to Sochi, why target Volgograd? For Russians, Volgograd’s symbolic and historical importance cannot be overstated. As commentator Dmitri Trenin wrote, Volgograd is “a symbol of Russia’s tragedy and triumph in World War II [and] has been singled out by the terrorists precisely because of its status in people’s minds. Their aim was to hurt Russia’s pride, as well as its people.”

Volgograd is also the largest city in the region with over a million residents and serves as a conduit to Moscow. It was speculated, for example, that Asiyalova, the first bomber, was planning on traveling to Moscow by bus to carry out her attack there. In light of the new bombings, however, it’s clear Volgograd is the main target. The attacks also cast international doubt on whether the Russian government can ensure security at the Olympics. Indeed, security experts believe the terrorists’ goal is to split the Russians’ attention. “I think the goal was to distract security forces. Because now, with the Olympics coming up, they’ll be forced to think not only about ensuring the safety of the major Russian cities as well as Sochi and the infrastructure around the Olympic facilities,” Andrei Soldatov, the editor of Agentura.ru, which reports on Russian security and intelligence, told RFE/RL. “On top of that, they’ll also have to pay special attention to Volgograd. It’s an effective tactic — diverting attention away from a place where the terrorists may be planning their next attack.”

Outside of deploying patrols, executing raids and random ID checks, and relying on citizens reporting suspicions people and packages, the Russian police have little else at their disposal. As Umarov perhaps correctly surmises, Sochi has siphoned off resources making Russia’s other cities viable targets. But it’s not where the next bomb will go off that poses the greatest challenge to Russia’s security. The city itself is perhaps the biggest obstacle. By turning the cityscape into a warzone, Russia’s enemies utilize all of the city’s features against security: its hustle and bustle, the technology of urban spaces, dense population, large gatherings of people and anonymity among the crowd.