Why the Philly School District, One of the Nation’s “Most Screwed,” Is Laying Off Thousands – Next City

Why the Philly School District, One of the Nation’s “Most Screwed,” Is Laying Off Thousands 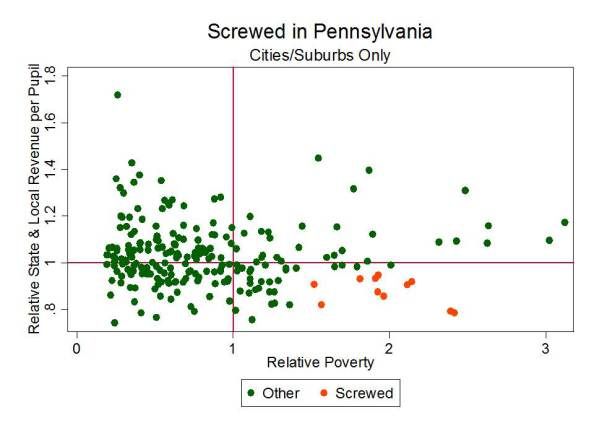 How “screwed” Pennsylvania school districts compare to others in terms of student poverty and state and local revenue. Credit: Bruce D. Baker

The School District of Philadelphia delivered 3,783 layoff notices this month in a bid to maintain its financial solvency as it faces a $300 million deficit.

Almost everyone involved calls the layoffs catastrophic. And while there’s a chance some firings will be averted, it’s possible, even likely, that the district will not receive a hoped-for cash infusion from the city and state, forcing it to open its schools in the fall staffed by nothing more than a single principal and teachers working solo to manage overcrowded classrooms.

The district has made legions of bad decisions over the years that have helped to deepen this crisis, but the root of the problem isn’t mismanagement. Instead it’s a combination of poverty and inadequate funding — a pairing that’s depressingly common in Pennsylvania.

Bruce D. Baker, a school finance expert and professor at the Rutgers University School of Education, assembles an annual list of what he bluntly calls the nation’s 100 “most screwed” school districts.

His index looks at two measures: Public funding and school age poverty rates, both of which he examines relative to local labor markets.

Baker’s list is not simply a collection of the usual troubled urban districts. Sure, Philadelphia is on the list. So are Chicago, Detroit, Dallas, Fort Worth and some other big cities. But Baker’s analysis finds that districts in small cities like Schenectady, N.Y., Lowell, Mass. and Kannapolis, N.C. are also coping with the dire combination of high relative poverty and too little public funding to attract quality teachers in their local labor markets.

Inner-ring, working-class suburbs are also well represented on Baker’s list. These include communities like Pennsauken, just across the Delaware River from Philadelphia in New Jersey, and Revere, which is north of Boston.

Pennsylvania districts that made the list are just as diverse as their national counterparts: Suburban districts north of Pittsburgh, the behemoth of Philadelphia and districts serving struggling smaller cities like Allentown, Reading and Uniontown.

Indeed, Allentown and Reading are perhaps the most screwed in the nation, going by Baker’s criteria. Both have high rates of relative school-age poverty and relatively paltry state and local support.

For Philadelphia, the abundance of Pennsylvania districts on the list represents both good and bad news.

At minimum, it undercuts the argument often made by lawmakers in Harrisburg (and sometimes in City Council) that Philly’s school funding problems are entirely the product of mismanagement, waste and union excess. Those factors may exist, but even if the district had been efficiently and effectively run, Philadelphia children would be at a significant funding disadvantage relative to their needs and the realities of the local labor market.

Yet the fact that so many Pennsylvania school districts are facing these crunches makes it harder for Philly to convince lawmakers in the statehouse that the city should get extra funding this year. If Philadelphia, why not Reading? Allentown? Uniontown?

In the long term, though, it probably helps Philly that so many other Pennsylvania districts are in similarly poor financial positions. Distrust and even disdain for the city is so endemic in the state capital that Philadelphia will probably do best making a case for better education funding as just one of many districts in need.