Why Striking Parisian Cabbies Are Attacking Uber Cars – Next City 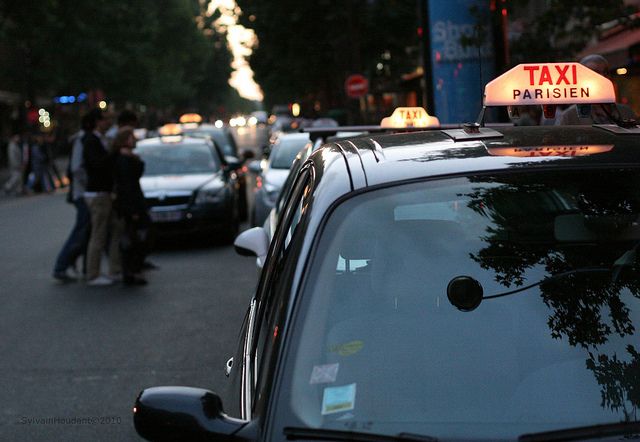 Word came from France on Monday of an attack on an Uber-driven car, set amid the country’s widespread taxi driver strike. The incident was unusually violent, and well-tweeted: The CTO from Eventbrite and the co-founder of open data company Five by Five were in the car and covered the incident in real-time. It goes to show that Uber and its colleague companies have managed to unite the world around the very same set of questions. Should app-driven black car services have to wait a set amount of time before picking up passengers? Should they be required to charge a minimum fare? Or is all that simply protectionism for a broken model? It’s a debate happening in city after city where companies like Uber have set up shop.

Emotions are running high. Uber said in response to the incident, “we strongly condemn this severe violence.” But the heart of the debate is exceptionally, even painfully, wonky. The history of hired transportation in many countries, the U.S. and France included, is one where attempts have been made to restrict how cabs operate. You can brush that away as mere preservation of incumbents, but the non-patently absurd idea at work is that taxis require more regulation than black cars because they are hailed on the street. Cabs generally pay some sort of licensing fee and put up with greater restrictions, but they also get some level of protection from competition. The temptation, then, is to say, “I’m a black car!” but operate as a taxi cab.

Regulators have tried to draw bright, if arbitrary, lines between the two services. That’s why France recently imposed a 15-minute wait time on what it calls Voitures de Tourisme avec Chauffeurs as a way of meeting the “pre-arrangement” expectation required of black cars. It makes cabbies nervous when there seems to be little functional difference between hailing a car by waving your arms and hailing a car by pushing a button on your smartphone. Uber looks like it unfairly gets the best of both worlds, and cabbies certainly notice when Uber drivers choose to stop acting like a cab — such as when they declined to participate in the slow-down strike that started all this, or when the company used the situation to conclude that “today’s incident certainly discourages Parisians from choosing a taxi for their next ride.”

It’s tough to sympathize with cabbies when they subject customers to, as the Eventbrite executive tweeted, “jet de pierre, vitre arrière brisée, pneu creuvé, crachats,” which Google Translate helpfully translates as “stone’s throw, rear window broken tire creuvé, spit.” Still, there are people who, out of solidarity with hard-working hacks, would never take a ghost cab from JFK but who don’t give a second thought to taking Uber from Charles de Gaulle Airport. Follow the logic of the pro-Uber argument here, and it leads to an unregulated market that potentially explodes the number of available cars for hire. The taxi market has been regulated in the past out of a sense that restrictions keep a healthy supply of cabs on the road and ensure a reasonable level of safety.

What’s happening with Uber and others all over the world cries out for a debate over whether those protections are no longer valid. But that’s a difficult debate to have when someone’s spitting on your car.