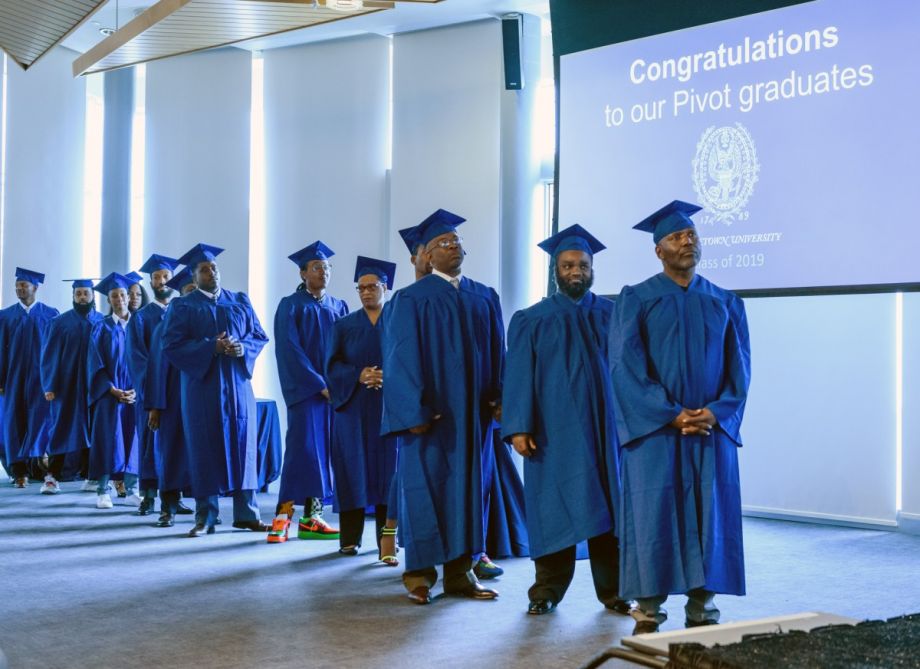 Graduates of the first Pivot Program walk the stage during the program's graduation in June. (Photo by Art Pittman, Georgetown’s McDonough School of Business)

This June, in front of friends, family, and Georgetown University faculty, a cohort of formerly incarcerated individuals celebrated their graduation from the Pivot Program, offered through Georgetown’s McDonough School of Business. After an intensive application process and 10 months of full-time coursework, the 15 graduates earned a certificate in business and entrepreneurship.

One of those graduates was Jermaine Dory, who had been incarcerated only a few weeks before applying to the program. After he was accepted into Pivot, he focused on founding his own software company. He contributed work to FlikShop, an app designed to connect families to their loved ones during incarceration, and started an internship with a software engineering firm.

“You get released from court or jail and you’re kind of on your own,” he says. “No support, nowhere to get jobs or food, no transportation to even get home. And with a record you don’t have the opportunities you need to live in the world. That needs to change in the justice system.”

The idea that the McDonough School of Business could step up for those transitioning from incarceration into society took hold in late 2018. Pietra Rivoli, a professor and vice dean of McDonough, and Marc Morjé Howard, a Georgetown professor who is also founding director of the Prisons and Justice Initiative, felt business and entrepreneurship could provide an effective educational model post-incarceration.

“People leaving prison obviously face all kinds of barriers, one of the most significant is in terms of employment,” Rivoli says. Roughly 5,000 individuals are released from D.C. correctional facilities every year; less than half of them find sustainable employment.

“The idea of entrepreneurship is that people can write their own futures and develop autonomy in their lives and create things,” Rivoli adds.

The graduates are Pivot’s inaugural fellows, so there’s no measure yet of the program’s long-term outcomes. But each fellow has secured an internship and two already found full-time jobs. Four businesses started by fellows are already generating revenue, from the Odd Kickz custom sneaker company to used auto dealer Finally Free Auto.

To prepare fellows for the working world, Rivoli and Howard tapped Georgetown faculty to develop a curriculum that combined liberal arts and business. One faculty member — Joshua Miller, philosophy professor and director of education for the Georgetown Prison Scholars Program — suggested a partnership with the District of Columbia government.

Miller knew the DC Department of Employment Services assists citizens returning from prison, and suggested the office support those enrolled in Pivot. The department agreed to provide a wage and job coaching to Pivot fellows. The U.S. Department of Commerce’s Minority Business Development Agency also supported the program with a $400,000 grant.

Pivot fellows start the program making $10 an hour, the training wage the department pays all participants in its workforce development programs. After the first three weeks of Job Readiness Training, their salary is subsidized by Georgetown to $12 an hour. Once the students secure an internship, in the final phase of the program, the subsidy increases to $15 an hour.

“It’s usually a sacrifice to go to school and work,” says Pivot fellow Kadija Clifton. The funding, she says, “was a way to ensure your needs will be met to execute this opportunity.”

In returning home after incarceration, Clifton was concerned about food insecurity in her D.C. neighborhood. While enrolled in Pivot, she developed a business model providing plant-based food to D.C. neighborhoods with food deserts.

The rigorous application process requires that applicants are Washington, D.C., residents, at least 25 years old, have a high school diploma or GED, and have been released from a local correctional facility within the past two years. The fellows then engage in coursework ranging from business fundamentals to literature, economics and civic engagement. Professors also help fellows hone professional and life skills like public speaking, conflict resolution and personal finance.

Pivot partners with local employers to match fellows with internships about midway through their coursework. Clifton is spending her summer interning for an HIV awareness nonprofit.

Pivot graduates become Georgetown alumni, which Clifton and Dory say is an important addition to their resume. The program also offers any relevant support or resources as fellows transition into a job or entrepreneurship.

“Georgetown is a highly-ranked school, and for them to take a chance on returning citizens, this type of program could hopefully spread to other universities and help change society’s narrative of what returning citizens can accomplish,” says Dory.

Rivoli notes that people who have been incarcerated are both resilient and flexible in the face of difficult circumstances — qualities that translate to strong entrepreneurs. She says McDonough is preparing to kick off its second cohort of Pivot fellows this fall.

“It is a lonely road returning home, and having every door shut on you,” says Clifton. Pivot has offered her a different future: she’s now searching for employment that addresses food injustice, continues to develop her business plan, and advises on a podcast chronicling the reentry process.

“The process was challenging, and I grew so much,” she says. “It opened me up to different opportunities and experiences — I became a Georgetown Pivot fellow.”