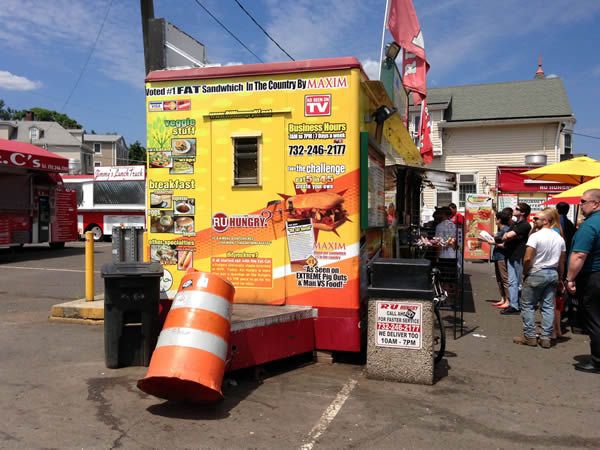 At least, come next Thursday, they won’t be clustered in Lot 8 along scenic College Avenue anymore. Since the mid-1980s, this New Jersey city and its hometown college have wrestled with what to do with the trucks. Efforts to tame them have perhaps succeed too well, so much so that customers gather at all hours at picnic tables, complete with red and yellow umbrellas, to consume the aptly-named “Fat Sandwiches” for which the trucks are known. Earlier this year, Rutgers launched its own grease truck of sorts, part of a national trend-within-a-trend of university-owned food trucks.

But the university is now pushing the iconic trucks back onto the streets. By August 15, the remaining handful that make up the pod in Lot 8 will have to disperse. Some will find spots elsewhere on campus. It’s the end of a college era, but it’s also about what happens when you wake up after so many years and what was once a fringe, semi-formal slice of business turns out to have become something far more central and fixed.

“We wanted to make sure that when there were mobile food trucks and they remain on campus,” says E.J. Miranda, director of media relations for Rutgers University, “that they were actually mobile.”

Mobility, though, is in the eye of the beholder. Ayman Elnaggar, 45, in sunglasses, a yellow Nautica t-shirt, close-cropped hair, and beard, is owner of RU Hungry?, which runs two of the trucks in Lot 8. He points to where a flap on his mammoth “state of the art” yellow flagship truck has been lifted to prove that the vehicle actually does have tires.

Still, when was the last time the truck, you know, actually moved? “Ten years ago,” Elnaggar says with a smile. “But is it movable? Yes, it is.” 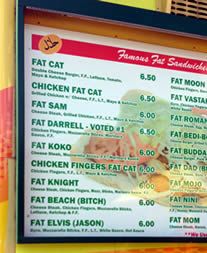 The raised flap reveals a fair amount of accumulated trash under the truck. But that doesn’t seem to matter much to customers. At noon on an August weekday, there’s a full lunchtime crowd. A group of coworkers from nearby Somerset stop Elnaggar to ask him about the move. “We come here a lot,” explains Rich Gibson. Grease truck cuisine is more or less bar food on a roll, and it’s fairly cheap. Since the “Fat Darrell” — a hoagie loaded with chicken fingers, mozzarella sticks, french fries and marinara sauce, priced at $6.50 — was named the best sandwich in America by Maxim magazine, Elnaggar says that his clientele has gone from “90 percent” students to a diverse mix that includes workers from nearby offices and food tourists who travel up to two hours to sample his fare.

Gibson, though, prefers the Vava Voom. “Think of a cheesesteak that has bacon in it,” he testifies. “It’s serious stuff.” His colleague, Cassandra Hill, orders the Fat Knight, named after Rutgers’ mascot. For Gina Dragowski, it’s the Fat Beach — a Rutgers-requested renaming of something more vulgar.

“It’s one of those things,” Dragowski says before she gets caught up in the thought. “You can’t get this anywhere else.” (This couldn’t be independently confirmed.)

Elnaggar bought the first of his two trucks, a smaller red-and-tan number now only in operation during particularly busy seasons, in 1997. He paid $55,000, and it was the fulfillment of a long-held desire. “I used to work in Manhattan, in delis and stuff,” he says, “and I always dreamed of having my own business, since I started working. And I found a great opportunity.” 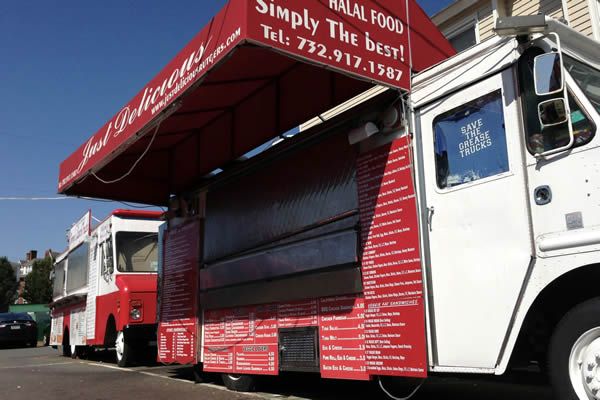 The history of food trucks in the U.S. is said to trace back to the chuckwagon in the American west. (See David Weber’s The Food Truck Handbook for a terrific recounting of the evolution of the field.) Food trucks today can be complicated business, what with fights over choice spots, local regulations on everything from licensing workers to limits on truck size, and the resentment of fixed-place restaurants that can see them as unfair competition. But the trucks are still an attractive point of entry into the restaurant business. New Jersey’s grease trucks were said to spring up in the 1960s in New Brunswick. They, like many other mobile vendors, have stuck to foods that can be made with a limited number of ingredients, keeping overhead low and operations streamlined.

By 1985, according to a timeline released by Rutgers, the city of New Brunswick had grown tired of the congestion, littering and noise that seemed to follow the trucks as they roamed, and created designated spots for them along College Avenue. But problems continued, and in 1992 the city banned the grease trucks from setting up on public roads. A corner of Lot 8, a general parking space for the university, was given over to mobile vending. Parking spaces were removed, a bus stop was pushed to the street and electricity was put in to cut down on noise from the trucks’ generators. In 1999, the grease trucks negotiated three-year contracts with the school. When those were up, one-year contracts took over.

By 2007, though, Rutgers was eager to get started on a long-in-the-works plan to develop College Avenue, and the grease trucks were put on month-to-month agreements. The road is to be the site of a $295 million redevelopment project done in conjunction with the New Brunswick Development Corporation, known as Devco. Lot 8 site is slated for a 500-bed apartment-style housing complex, as well as a university honors college and new academic building.

Rutgers, it’s clear, is more broadly questioning where something called a “grease truck” fits into the future of a modern university. In putting together a new policy for mobile vendors, the university argued that the rent paid by the food trucks doesn’t nearly cover what the school puts out for security, electricity and, yes, grease removal. The school raised the idea that students today are looking for a variety of cuisines and healthy food choices. His truck has added salads over the years, Elnaggar points out.

Elnaggar says that he was only told in mid-July that the grease trucks needed to be out of Lot 8 by mid-August. Miranda, the university spokesperson, counters that the vendors were told that a change was coming some two years ago. It’s actually been longer than that, says Elnaggar with a laugh. “We’ve been knowing about this master plan for this area since I came to this parking lot in 1997. Yes, we know it was going to happen, but when was it going to happen?”

On Monday of this week, Elnaggar says he found out that he had been approved for a new spot on Rutgers’ Livingston campus, about a five-minute drive away on Joyce Kilmer Avenue. There’s upsides and downsides to the new arrangement, he says. The positives include that his new contract will allow him to operate until 2am, far later than his current 7pm closing time. (Fat Sandwiches are, unsurprisingly, popular late-night fare with students, but they get them by visiting other Lot 8 trucks.) And he won’t be forced to compete for a space back out on College Avenue. “For a trailer of this length,” he says, “it’d be a hell of a challenge every day.”

But there are, for him, considerable negatives. “The bad news,” Elnaggar says, “is that we’re leaving this beautiful spot where we’ve been for more than 20 years.” More than that, though, there are operational concerns. He’s being cut off from Rutgers’ electrical system and its trash services. Under the new plan, his trucks will be required to leave campus between 3am and 6am What’s the point?, he wonders. (Miranda, the university spokesperson, says that the point is at least in part to be able to “maintain the site.”) Elnaggar will have to rig up a generator, and if it’s not fully back into the wild, it’s far more disconnected from the grid than his grease truck has been in the 16 years he’s owned it.

“We’ll be on our own,” says Elnaggar. “They’re basically just giving us a spot and,” he snaps his fingers, “that’s it.”

Still, Elnaggar is the optimistic sort. The direction New Brunswick’s iconic grease trucks are headed is, in many ways, back to their roots as roaming purveyors of foods that customers can’t help but flock to. “If we keep making the good sandwiches,” he says, “and we will, the people will follow.”