Why More Homeless Shelters Are Welcoming Their Clients’ Pets – Next City

Why More Homeless Shelters Are Welcoming Their Clients’ Pets 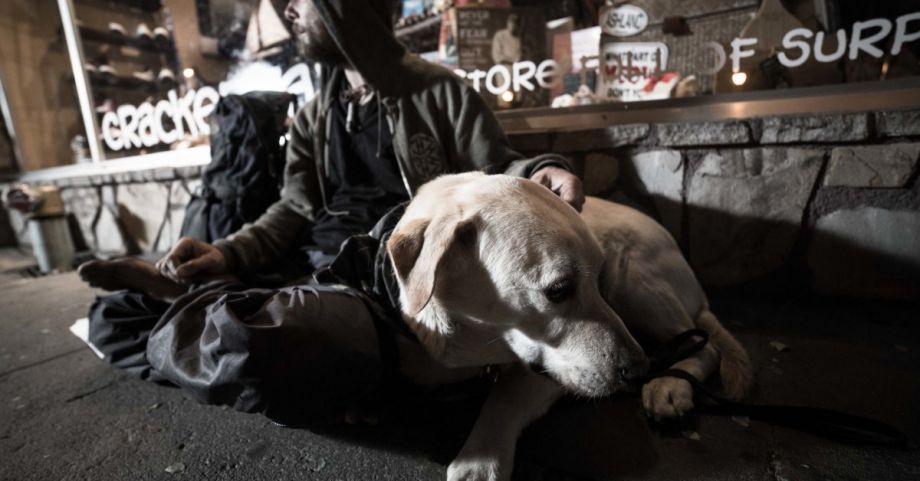 Travis Williams says it started with a philosophy – and a simple question: “What can we do to ensure that folks don’t have to be turned away?” The answer, says Williams, the chief development officer at Springs Rescue Mission , a homeless shelter and day center in Colorado Springs, Colorado, was to remove as many barriers as possible to getting people off the streets.

One of those barriers was an inability to accommodate people who refused to be separated from their pets, even if it meant having a safe place to sleep – a decision that Williams says as many as 25 people who use the Springs Rescue Mission shelter were making every night.

“If somebody really would make the tough decision to [say], ‘I would rather freeze outside than to leave my pet outside’ … We want to remove that barrier and allow folks to come on in and stay warm and dry for the evening,” he says.

Animals provide companionship and a sense of security for people on the streets, says Harmony Rhoades, a research associate professor in the department of social work at the University of Southern California who has studied pet ownership among nearly 400 homeless youth in Los Angeles. “Those companion animals can be a really important source of support, of mental stability, among people who experience so much loss and trauma and vulnerability,” she says.

Many shelters and homeless service providers have strict rules in place around bringing animals into their facilities, as pets also raise questions around allergies and general safety – and that means that owning an animal may preclude people from getting the services they need. That appears to be changing though, as more and more shelters are lowering barriers to entry, and recognizing that many of their clients are inextricably tied to their pets.

Rhoades says that she had seen some homeless youth choose to stay in precarious living situations, in which they were subjected to abuse or violence, just so they could stay with their pets.

“There is an instinct to have this kind of old-school, paternalistic view of people experiencing homelessness and this idea of, ‘We know what’s best for you, you should be prioritizing your own shelter needs. The most important thing to you should be to get off the streets. Your pet shouldn’t matter in that context,’” Rhoades says.

Instead, she says it would go much further to give “people agency over their own lives, respecting their choices and understanding what is really important to making a transition out of homelessness work.”

Dennis Plummer runs Heading Home, an organization in Albuquerque, NM, that runs two emergency shelters – for men, women and families – and helps people living in various stages of homelessness transition into permanent housing. He says clients have been able to stay at Heading Home shelters with their pets for over two years now. “I think it just happened: somebody said, ‘Hey, I have a dog, can I come in?’ We’re like, ‘Yeah, come on ahead and we’ll work it out as we go,’” he recalls.

The shelters are set up like a dormitory, with as many as 70 people sleeping in close proximity on bunk beds in a single room, he explains. Animals can stay bedside with their owners – either on a leash or in a cage.The pets are mostly cats and dogs — though once, someone brought a rat.

Plummer says there were initial concerns about whether the animals would create a disturbance: Would some dogs be aggressive? Would cats set off allergies? Would staff see their presence as creating more work? But staff members were the ones who encouraged the shelter to try it, he says, and there has yet to be an incident.

At Springs Rescue Mission in Colorado, the shelter allows people to leave their dogs and cats overnight in cages in specially designated areas, and they can spend time with their pets in outdoor sections of the facility. Those cages were donated by pet advocates and other members of the local community. The shelter is also looking into building a dog run and upgrading its kennels, Williams says, and that expansion will be funded by a capital campaign through which the shelter raised $15 million.

He acknowledges that shelters often operate on shoe-string budgets - often funded entirely through private donations - and it may be difficult for some to make transition to more pet-friendly services. “When you’re trying to shelter as many people [as you can] and trying to get folks in and out of the cold … having to add another process for pets when you’ve got limited staff already” is not always easy, Williams says.

“But at the end of the day it’s an important conversation to be having and to be wrestling with – what can we do to really encourage individuals who need help to get the help that they ultimately need?”

Jillian Kestler-D'Amours is a reporter and editor based in Montreal.