Why History Matters in Equitable Development Planning – Next City 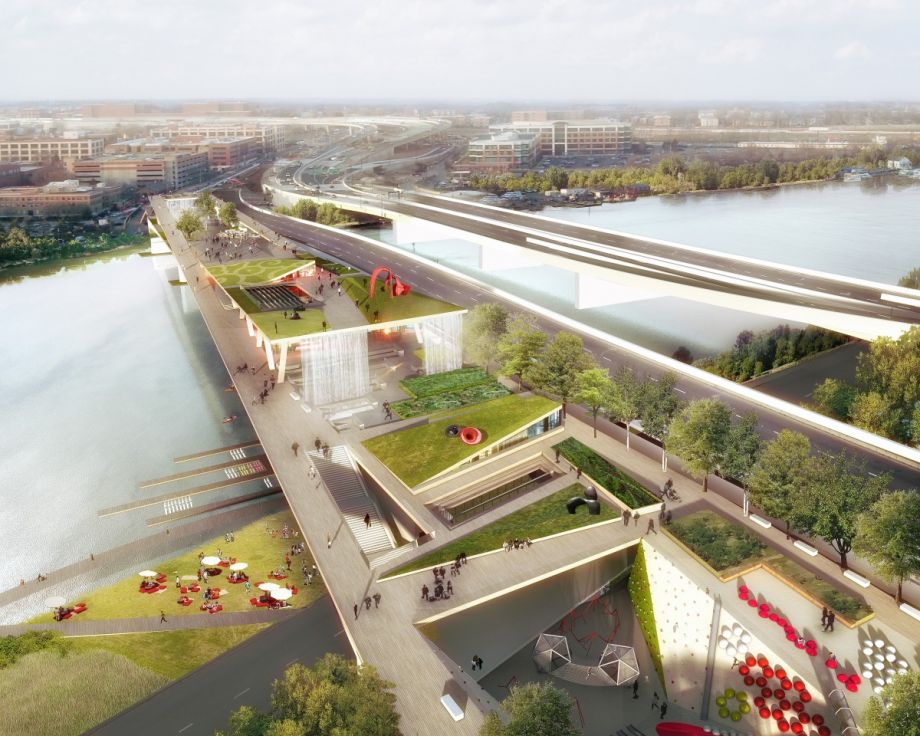 A rendering of the original winning proposal for 11th Street Bridge Park, by OMA+OLIN (Credit: OMA+OLIN)

Instead, in the second of three reports on the 11th Street Bridge Park project in Washington, D.C. — released today — the Urban Institute’s Mary Bogle, Somala Diby and Mychal Cohen begin with a seven-page history of community and economic development in and around D.C.’s Wards 7 and 8.

Those are the wards with the highest poverty rates and highest percentage of black residents in the District, and compared with Ward 6 on the other side of the future Bridge Park, dramatically lower rates of higher education, and much higher rent burdens.

“It’s difficult to talk about achieving equity in the present day without taking a nod to the way that structural racism has manifested,” says Diby. “We can talk really generally about how structural racism manifests in space, but to lay it out explicitly, to show how this is not accidental, there’s a reason why this part of the city is facing what it’s been facing … that’s powerful.”

Not to mention, it’s a riveting history. The Anacostia neighborhood, now a predominantly black neighborhood, sits at one end of the planned park, which is due to open in 2023. It was once actually a “white working-class enclave” where one covenant forbade “negroes, mulattoes, pigs, or soap boiling.” The shift in area demographics, the authors write in their report, “was the result of development decisions made over the 20th century that altered the landscape of D.C. significantly.”

During the Great Migration, Bogle explains, “[African-Americans] were drawn to D.C. because they thought they were going to get more equity for their kids in schools, and then they got to D.C. and what actually happened was they got put into crowded neighborhoods because that’s where the public housing got put. Then schools declined over time.”

Many of those neighborhoods were on the east side of the Anacostia River, in Wards 7 and 8. When the schools integrated after Brown v. Board of Education, most of the remaining white families decamped for all-white suburbs or other neighborhoods in the city that were off-limits to black families. A generation or two of disinvestment followed.

That history is more than obvious to many long-standing residents of Wards 7 and 8. Many have lived through it, often being displaced through the policies of the Urban Renewal era or by other historic forces that led them to live in these areas today. Some of those residents talked to the Urban Institute researchers.

“Several folks had lived in other parts of the city that had transformed in decades prior, and had seen whole neighborhoods change rapidly,” Diby says. “That history is very real to them.”

Perhaps most presciently for the 11th Street Bridge Park, it is also a history of broken promises.

“The qualitative data in the report surfaces an important thing to recognize, which is how tired residents are of being told things are going to get better, and then they don’t get better,” Bogle says. “There are a lot of people in Wards 7 and 8 who are pretty jaundiced through all this. Bringing them back to tables where they feel like their voices are heard and something meaningful will happen and they won’t incur a greater rent burden as well, is a hard task, given all this history.”

One of the most important outcomes that the researchers attribute to the 11th Street Bridge Park Equitable Development Plan is a change to the plan itself: the addition of a new strategy for “cultural equity,” to amplify the arts and culture of the surrounding community, in revisions finalized in October 2018. The addition is in many ways a nod to the notion of preserving the memory of how these areas came to be what they are today, validating the lived experience of those who, by choice or by economic force, stayed in Wards 7 and 8 through the years of disinvestment, the crack epidemic and mass incarceration.

The cultural equity work is already happening through the annual Anacostia River Festival and the Black Love Experience, a yearly event organized by Anika Hobbs, a Ward 8 resident and entrepreneur who spoke to the Urban Institute researchers.

“The 11th Street Bridge Project says, ‘I see you,’” Hobbs said. “‘I see the value in what you do, and let’s do this together.’ And I think that’s completely different. And that removes the fear of that obliteration [from gentrification] I was nervous about.”

The report includes more “conventional” outcome measures as well. So far, the project’s homebuyers’ club has helped 70 participants purchase homes. Meanwhile 104 businesses received loans or technical assistance from the Washington Area Community Investment Fund as part of the equitable development plan (a total of $525,000 in loans), 31 construction worker trainees were placed and employed for at least 90 days after program completion, and 7,603 pounds of fruits and vegetables have been harvested on farms and plots funded through the Bridge Park’s equitable development plan.

The authors also included a forward-looking note of caution to ground expectations in historical reality:

… achieving a set of equitable development results is not the same as achieving actual equity (i.e., fairness and justice) for an historically marginalized community. After all, it is possible to imagine any number of equitable development projects being completed in a previously disinvested-in neighborhood without true equity ever being achieved. In other words, more affordable housing, small businesses, jobs, and cultural experiences may be preserved or created without there ever being enough of these things to prevent displacement of many current residents, much less to substantially mitigate the widespread effects of systemic racism on black and low-income residents living in places like DC’s Ward 8.

That’s not to say equity isn’t worth striving for, but rather, equity is not something that one project, no matter how ambitious and thoughtful, can achieve on its own. Equity is a generational aspiration.

“We wanted that section at the end discussing there’s a difference between equitable development and equity as a result,” Bogle says. “The Bridge Park alone isn’t going to make it on equity — and they know that. It’s going to take a lot of partners.”