Why European Parents are Suing Their Cities Over Poor Air Quality 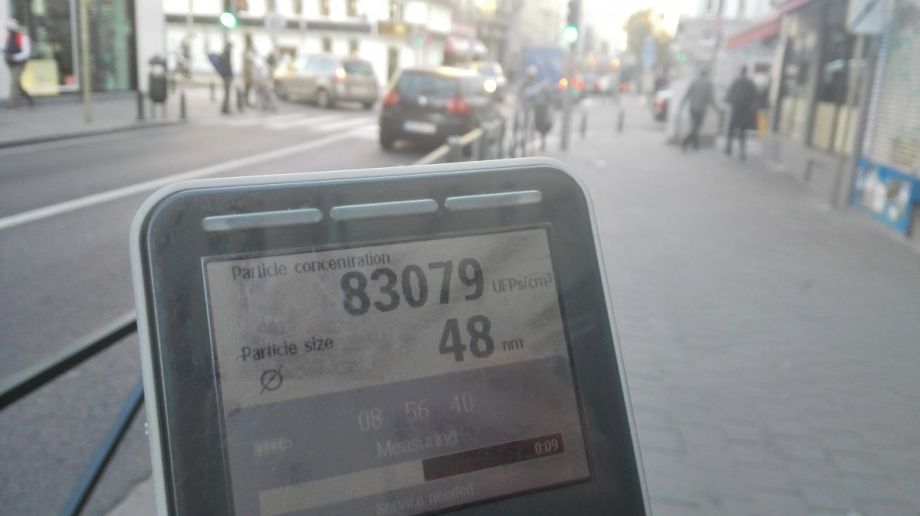 Seven years ago, Lies Craeynest won a €10,000 neighborhood improvement grant from the local council in her Brussels district. She planned to spruce up the busy arterial street where she lives by working with her neighbors to grow climbing plants along the houses. But the council government had a warning about her choice of plants: If you live on an arterial street, weak varietals will die from toxic air.

For Craeynest, today the mother of a ten-year-old boy and a five-year-old girl, the warning was a gut punch. “I’d never made a connection between plants surviving and pollution,” she says. “I thought about my kid as I pushed a buggy at the same height as car tailpipes when crossing [the street]. I realized that we’re living under a cloak of exhaust and I got very angry.”

Today, Craeynest is among the plaintiffs in a lawsuit against the Brussels government for failing to meet European Union air quality standards. Last year, the Belgian capital’s worst air quality days were twice as bad as those in Manhattan, driven largely by diesel cars and home heating. Craeynest’s lawsuit is one of 80 cases that environmental law non-profit ClientEarth has waged against European city governments and arguably the most significant, with the European Court of Justice ruling in the citizen activists’ favor in June 2019.

But how Craeynest became the poster child for fed-up parents suing their own cities started with a daily routine: school pick-up. Following her plant-induced breaking point, Craeynest began chatting up fellow parents. She learned that poor air quality had become normal for her child’s schoolmates, where asthma injections were just an assumed cost of living in the European capital.

“Brussels is very good at neighborhood support,” she says, like the generous grant for her street beautification project. “But we just get peanuts — the big stuff doesn’t get tackled.”

Craeynest is Belgian but has lived all over the world for her work with international NGO Oxfam. She handles weighty global issues like climate negotiations with diplomats at EU headquarters in central Brussels, but found big NGOs like Oxfam ill-equipped when confronted with such a small-scale environmental issue. “We didn’t see NGOs stepping up to the plate,” she says. “It’s difficult for them to be active at the city level.”

So Craeynest took matters into her own hands. In July 2015, she invited some other families to a neighborhood park for a picnic where the kids could play and the adults could discuss air quality politics. Brussels, which in Belgium is a so-called regional government made up of 19 smaller municipalities, was preparing an air quality plan as its contribution to the upcoming climate negotiations that eventually resulted in the Paris Agreement.

The parents launched a Change.org petition calling for an ambitious plan. It garnered 5,000 signatures in 14 days, enough for the Brussels environment minister to meet with the nascent activists that fall. Encouraged, the group of parents, now calling itself Clean Air BXL, staged a publicity stunt in front of the Brussels regional parliament where they dressed up as waiters and served dirty water to the legislators as they entered the building. Their message: “You wouldn’t drink dirty water, but we’re breathing more than 10,000 litres of dirty air a day in Brussels.” But despite the media frenzy that followed, they saw little progress due to the nature of the Belgian political system.

“Brussels is set up for stasis,” Craeynest says. “Everyone has an equal amount of power so nothing happens.” For example, the activists unsuccessfully demanded the regional government redact policies that subsidize car ownership, such as a tax break for companies who provide cars as part of compensation packages.

As 2015 drew to a close, ClientEarth reached out to Clean Air BXL and informed them that there was legal backing to their demands. The EU’s Air Quality Directive came into effect on January 1, 2010 as part of an effort to stem the more than 400,000 early deaths attributed to Europe’s poor air quality in 2016, the most recent year for which data is available. But even with over ten years to prepare, 26 of 28 EU member states were in violation last decade. “It was a complete lack of respect of even the basic rule of law,” says ClientEarth lawyer Ugo Taddei.

So Taddei made a proposal: Would Craeynest and her compatriots like to take Brussels to court? ClientEarth had already done the same in the UK. On the basis of that case, the European Court of Justice ruled in 2014 that European citizens have a right to clean air.

Clean Air BXL debated the idea for months. “Our initial approach was very encouraging as we showed the government that citizens are with you in the push against the car lobby,” Craeynest says. “But pretty quickly we figured out that their intent wasn’t serious.”

Pascal Smet, state secretary of urbanism for Brussels, was the government’s minister of mobility and public works at the time. “Sometimes politicians should make people happy against their will,” he says. “On the issue of quality of life and having fewer cars in their city, that’s something a politician should be able to do. Not every politician is ready to take that risk.”

Finally, in 2016, five Brusselites signed on to a lawsuit. After the public advocacy campaign, the regional government expected litigation. “I was not surprised and it was their right to do so,” says Smet.

The wheels of justice grind slowly, however, as lawyers and judges sift through what is a municipal versus regional versus national responsibility on matters like regulating diesel cars and providing more public transport. Most recently, Brussels argued that it was in compliance with the EU directive because air quality averaged over the city’s network of pollution sensors is below the legal limits, even though individual sensors show excessive absolute readings in some locations. A judge ruled in the plaintiffs’ favor in June.

Smet disagrees with how his government has engaged in this subtle subterfuge. “You should monitor air quality at every crossroad, every street, and every traffic light,” he says. “You should never be afraid of the truth.”

But even with vocal supporters inside the government, turning court rulings into compliance has proven challenging. “It’s twenty-bloody-twenty and we still haven’t had an impact on the actual pollution levels,” Craeynest says. “They have gone up since.” In its court filing across Europe, ClientEarth has seen national governments in Bulgaria, Poland, and Germany all push back against the EU’s legal ruling.

“Pollution litigation has had mixed results,” says UN Environmental Programme legal analyst Maria Socorro Manguiat. “The good news is that the strategy also works outside of Europe. One key element is vigilance after judgment has been rendered, since in a few cases it was not clear what the defendant — usually a governmental entity — had done after being ordered to take stronger measures against air pollution.”

Back in Brussels, Craeynest is cautiously optimistic after the Green Party won recent elections. For fellow citizens thinking of filing such lawsuits, she remains encouraging despite the saga she has endured. “My advice is do it,” she says. “We need more of them because these governments are caught up and they need not a gentle push but a strong one.”

And when Craeynest inadvertently inhales a lungful of exhaust while cycling on Brussels streets, she now has a way to channel the anger she first felt seven years ago. “I know at least I have that court case in my pocket,” she says.