The Pull of the City at Christmas Time – Next City

The Pull of the City at Christmas Time 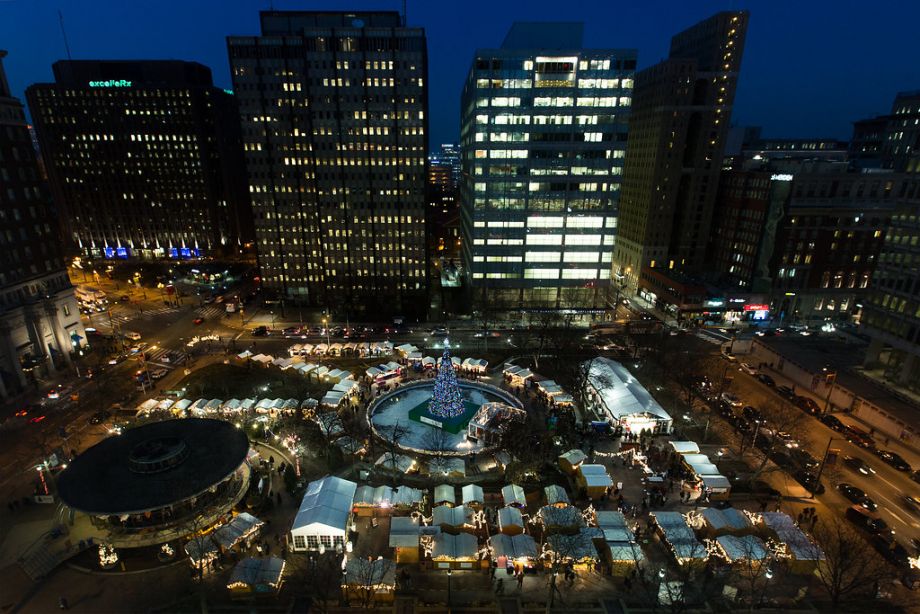 As Mary Chapin Carpenter once sang, it’s Christmas time in the city. With that in mind, we sent photographer Paul Gargagliano out into the twinkling Philadelphia streets to capture a taste of the holiday glow.

Paul’s job wasn’t only to photograph the city’s holiday makeover — we also wanted him to investigate how the urban environment figures into people’s memories and why they returned to perform certain seasonal rites year after year. Is it just about shopping, or is there something else at play?

Gargagliano’s photos and interviews fit into our larger conversation about public space in that each person’s story reminds us that urban centers, despite their challenges, remain our civic commons. Public spaces like Dilworth Plaza and Love Park are the places we return to in times of shared ritual. 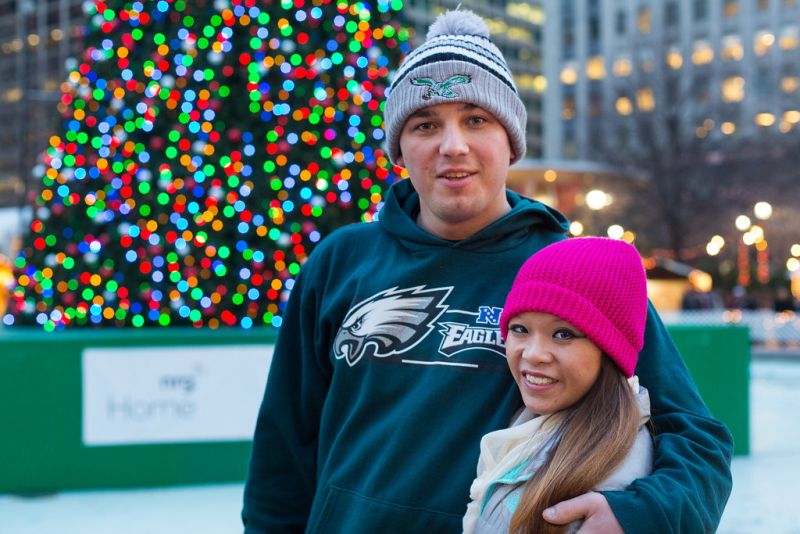 John and Emily, from Dover, DE at Christmas Village in Love Park

John: You come down and you just feel the vibrance. You see the bridges, the buildings, they’re all decorated in Christmas lights. The skyscrapers change their lights. Love Park changes. It’s just awesome. I’m 26 years old and I’ve probably been coming here for 24 years. 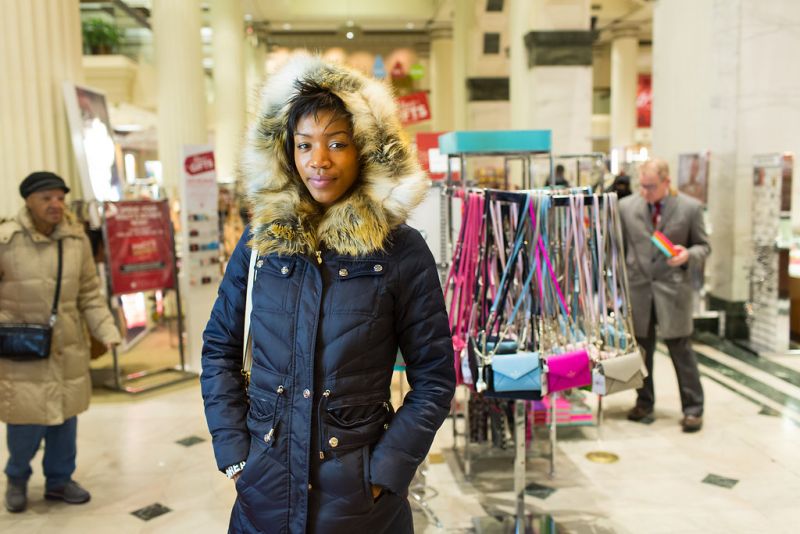 Sierra from West Philadelphia, in Macy’s by the Eagle 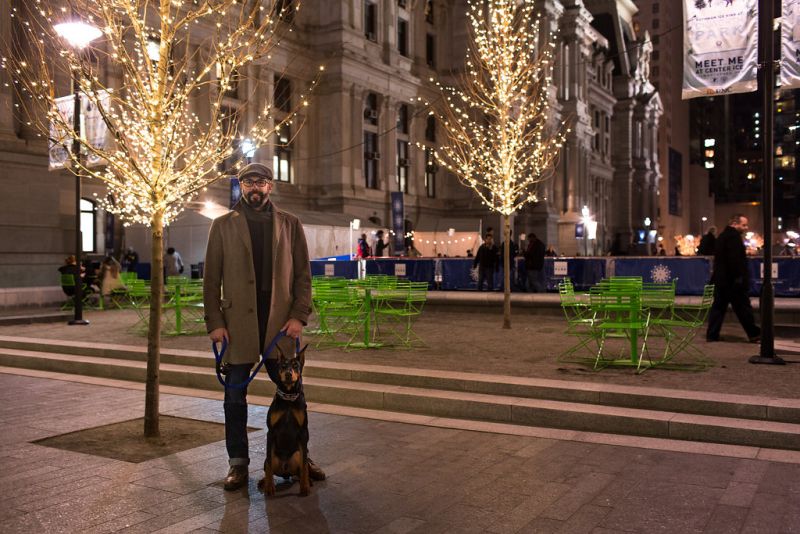 Paul: Is there a place in Center City that you think of as symbolizing the holidays?

Ryan: Depends what you consider Center City, but I always think of Franklin Square or Love Park or City Hall, right here, because they really do do them up so much, or even Jewelers’ Row when they bring our all the decorations every year. Do you remember the movie, “Silver Linings Playbook”? When they came in and did some of the main shots there, they decorated the whole street, and the Jewelers decided it looked so nice that they’d buy all the decorations. So they now put those up every year. 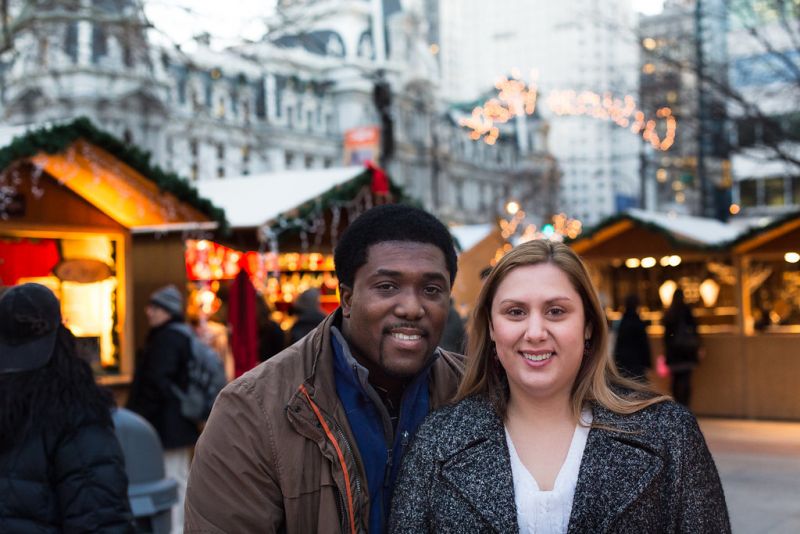 Shawna Maria and Matt, in from the suburbs, in Christmas Village at Love Park

Matt: Macy’s, the lights display show – that’s always the prime spot. I’ve been going there since I was a little kid. Back in the day they used to do shopping sprees for little kids. It stayed the same pretty much. 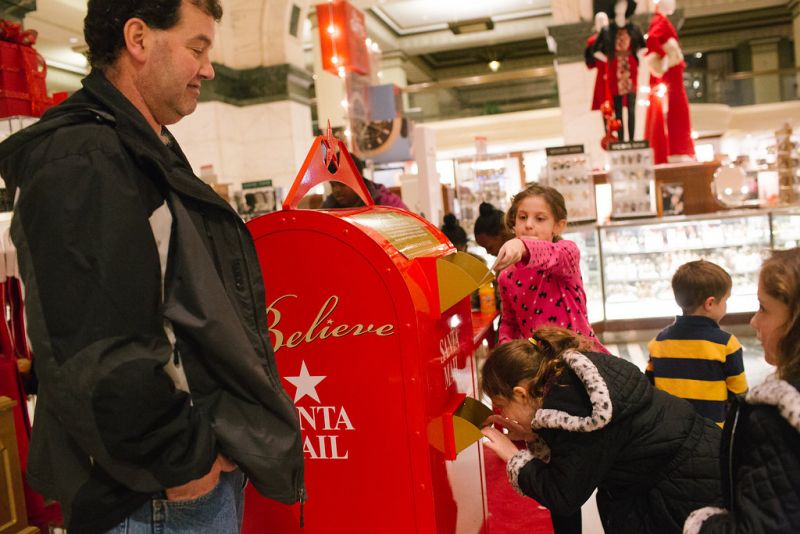 The Christmas display at Macy’s.

Interviewer: Does it feel different to you during the holidays?

Matt: I think it does feel different. It feels more welcoming. People are happier. You know, spending money and stuff like that. There’s definitely a lot of quietness going around, people caroling. I don’t feel like people are tense or in a rush.