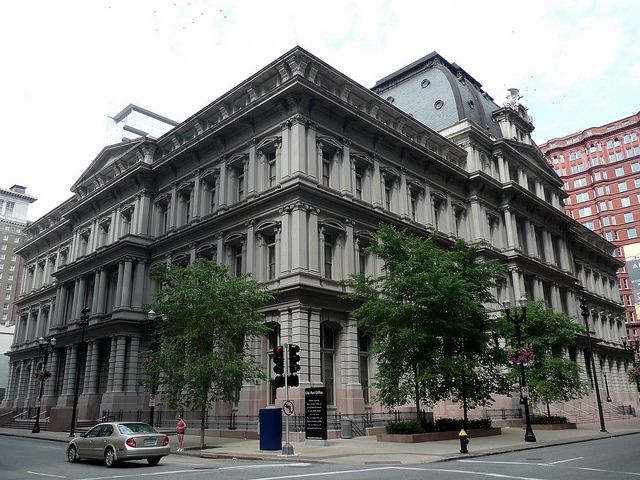 The St. Louis of 2013 is not the St. Louis of 1998. At least, not through the city’s central corridor, from downtown to the Washington University campus along the western border. Scores of buildings from another era — ornate warehouses, four-story car showrooms, city-owned hospitals — have emerged from years of vacancy to be reinvented as lofts, condos, schools, design firms and senior housing.

The story is a familiar one in many American cities. The 2000s were a good decade for urban areas, but the transformation in St. Louis has been striking, as a handful of historic areas boomed while some nearby residential areas wilted on the vine.

What accounts for the boom? Leadership? Organic demand from a growing population? Or the work of a progressive incentive passed at the end of the 1990s that changed difficult historic renovations from a real estate gamble to credible investment?

In 1998, the state of Missouri passed what has come to be considered model legislation: A historic tax credit program that covered 25 percent of renovation expenses for eligible properties. The St. Louis area is awash with properties whose owners pursued listing on the National Register of Historic Places in order to tap into the credits, which are frequently issued in conjunction with a 20 percent federal credit.

Suddenly, St. Louis buildings that had fallen victim to population loss in the 1970s and ’80s could come back to life in an economically feasible way. Between 1998 and 2012, the lights came back on in some of the most impressive spaces west of the Mississippi. And because the credit could also be used for contributing structures in historic districts, small time developers could renovate homes one address or block at a time.

The program has worked for connected developers and savvy rehabbers, and has generally been a boon to the construction and architecture professions in the perpetually soft St. Louis real estate market. But after 15 years of success stories, Republican state legislators, who have long wanted to curtail the program, are moving ahead with a plan to cap the credit at $50 million annually, or about one-third of the amount issued in a typical year.

The program has done more than just save buildings. It has helped developers chart a course forward for St. Louis’ most distinctive districts and neighborhoods, long after the industries that created them disappeared. After decades of population loss, St. Louis finally began to regain its footing by tapping into one of its greatest strengths — its architectural history. But decades of mismanaged housing and development policy, and the same industrial shifts seen throughout the Midwest, left the city with historic building stock in desperate need of investment. Shoe warehouses downtown had been empty for years. Four-family flats in south St. Louis had outlived their market appeal. Closed schools faced an uncertain future as population decline guaranteed declining enrollments.

On the East Coast, where rents and land values are dramatically higher, the market would have long ago swept up these properties. But in St. Louis, with low rent and ample housing and office supply, many structures met the wrecking ball in favor of surface parking. The onset of the program in 1998 opened new opportunities for these structures at just the same time that residents wanted new housing options in the city.

The success stories are far too numerous to mention. A few in particular finally closed open wounds long ago inflicted on the city. The Homer G. Phillips Hospital was once a signal achievement of neighborhoods on the city’s north side. Built in the 1930s to serve the medical needs of African American residents, in its earlier days it also served as a rare facility where black doctors and nurses could get a medical education. Its closure in 1979 was seen as one of the most egregious acts of neglect and denial of basic services to residents in need. It was the type of wound slow to heal, as the mostly shuttered hospital towered over the Ville neighborhood for years. When it was finally renovated into more than 200 senior apartments in 2003, it turned the page on one of the most controversial moments in St. Louis history.

The older City Hospital south of downtown had long straddled the space between the 1950s-era public housing towers of Darst-Webbe and the historic Lafayette Square neighborhood (a district which also benefits from the Missouri credits). Its exposed upper stories, in view from the adjacent interstate interchange, were a visible indication of a struggling city unable to manage glaring problems. Preservationists had fought off attempts to demolish it for two decades, until the herculean renovation finally began in 2003.

By realizing the potential of these long-dormant and often dangerous structures, financing nearby projects became easier. Next year a new grocery store will open within the shadow of the City Hospital, a development unthinkable to St. Louis banks during the two decades when the building was open to the elements.

St. Louis is a Rust Belt town with a glorious past, but a future cast into uncertainty by one of the most expansionist suburban development patterns in the country. Areas of the city bouncing back after decades of disinvestment have tapped into its architectural legacy. Missouri’s historic tax credit program shifted public policy from decades of neighborhood clearance in areas deemed “functionally obsolete” to a model that finally realized the value of what prior generations of St. Louisans had already built.

The Missouri Legislature began expressing concern with the growing use of the program when state revenue took a hit during the recession. About $142 million in credits was redeemed in 2009, meaning the state’s general revenue was reduced by a comparable amount. The credit is used throughout the state, but unsurprisingly credits are primarily issued to urban areas, and St. Louis in particular. The success of the program may ultimately be its downfall. As state Senator Will Krause opined, “The question is, do we really want to spend $140 million to redo old buildings?”

Such a view is divorced from an understanding of Missouri’s history. Every city sprawled after the 1950s, but Missouri pursued sprawl with zeal. It built 33,000 miles of state-maintained roads and highways, making driving and commuting easier and devaluing existing property and buildings with each new mile of road built. In addition, the state forced St. Louis to fund its public transportation network entirely locally, reducing service and forcing more people into cars. The road and highway building bonanza still costs Missouri $1.4 billion per year, and represents a subsidy to suburban areas measuring in the tens of billions since the 1950s.

In that context, a program that sends a few tens of millions back to St. Louis, while giving the city back its most prized neighborhoods and grandest buildings, is an unbelievable bargain.

Every St. Louisian knows the city has suffered some serious blows since the 1950s. Nonetheless, the city retains a surprising amount of its built environment. The rebirth and reimagining of so many critical buildings in the last 15 years has spurred a pride in the city that had suffered from decades of bad news. Missouri’s Historic Tax Credit program has done more than any other incentive to help St. Louis once again put its best foot forward. After five decades of policy aimed at systematic dismantling the city, 15 years is too soon to rescind the best corrective implemented so far.

Scott Ogilvie is a former bike mechanic and graphic designer who now serves on the St. Louis Board of Alderman, representing the city’s 24th Ward.