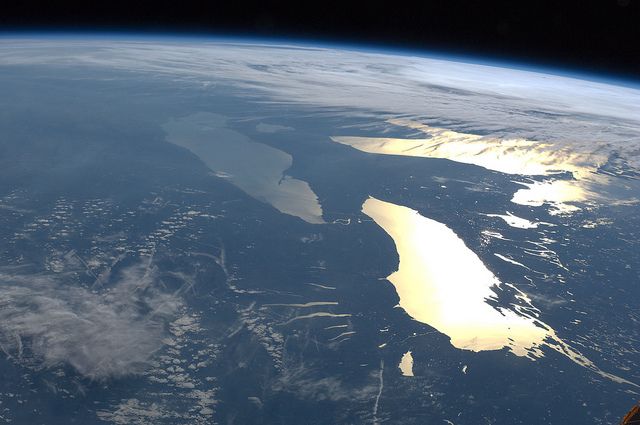 The wetlands surrounding the Great Lakes are beginning to come back — a least, a little bit of them — and not because of benign neglect. They are coming back thanks to a concerted effort by a combination of government agencies and environmental groups that have advocated and worked for the restoration of these fragile and vital environments for decades.

According to an October report, some 13,610 acres of coastal wetlands were added to the eight-state Great Lakes region between from 2004 and 2009. Given that the total wetlands acreage in the Great Lakes watershed is 8.5 million, that may not seem like a lot. Plus, some of that acreage comes from receding water that has exposed land. But it nevertheless represents a positive trend that stands in contrast to the rest of the country. During the study period, 360,720 acres of such wetlands disappeared across the nation at large.

An Associated Press story on the report points to the restoration of Erie Marsh on Lake Erie as one of the ongoing success stories in the region. The Erie Marsh Preserve, which encompasses 11 percent of the coastal wetlands that remain in Southeast Michigan, is part of an ongoing Nature Conservancy effort to rehabilitate the Western Lake Erie Basin, undertaken in partnership with businesses, hunting groups and many others.

That basin, according to the Nature Conservancy, used to be a complex wetland environment larger than the Everglades today. But generations of agricultural, commercial and residential development have transformed it. Despite dramatic improvements in water quality, pollutants from agricultural runoff remain a huge problem, as do invasive species. Part of the basin is still a dead zone.

Now, with the help of nearly a $1 million in funding from the Great Lakes Restoration Initiative (GRLI), an Obama administration effort that launched in 2010, the Nature Conservancy is bringing Erie Marsh back. That’s good news for the 65 species of fish, 29 species of waterfowl and 300 species of migratory birds who live there.

The GRLI has been responsible for the restoration and cleanup of countless other sites across the Great Lakes watershed. It’s been a commitment of more than $1 billion in federal funds so far — signaling a recognition of just how important the Great Lakes are to the country’s health and security. After all, they contain 84 percent of the surface freshwater in North America and provide drinking water to 30 million U.S. citizens.

At a time when the vital importance of clean water is becoming ever more apparent, this remarkable ecosystem — the largest freshwater system on Earth — seems more precious than ever, and more worthy of protection.

But the GRLI is just one of the many federal programs threatened by the budget wars in Congress. Initially funded at $475 million, its annual allotment has been cut steadily. A House subcommittee voted to slash its share in the coming fiscal year to $60 million, a number revised upward to $210 million by the House Appropriations Committee. But the Milwaukee Journal Sentinel, along with many other local observers, says that isn’t enough for the enormous task at hand.

From the Journal Sentinel’s editorial:

This is not money for programs that would be “nice” to have, as one of the slashers put it last year. This is money for programs vital to the health of the Great Lakes, which serve not only as an international environmental treasure but as an economic engine for a large part of the United States and Canada.

As water scarcity becomes an issue in more communities around the nation, the wisdom of cleaning and maintaining the water we have is gaining urgency. The Great Lakes states and neighboring Canadian provinces have shown astuteness and foresight in protecting those resources with the Great Lakes Compact, sometimes to the frustration of those just outside the watershed. Increasingly, elected officials living in water-rich areas talk about how important those resources will be as the climate changes and traditional solutions become less reliable. Restoring wetlands is a vital part of a comprehensive approach to water management. Initiatives like the ones funded by the GRLI are not a luxury, and Congress should think long and hard about cutting them as if they were.