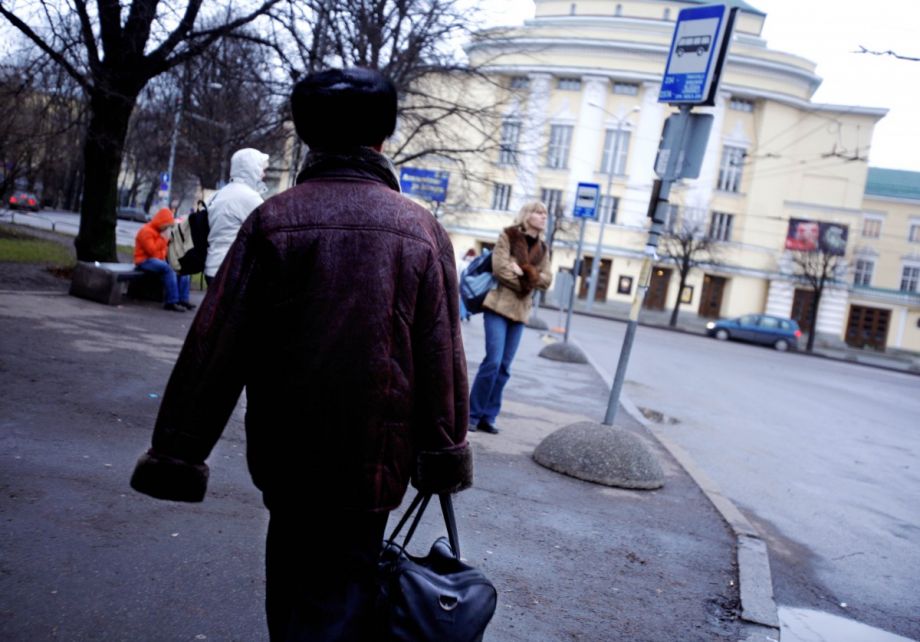 A bus stop in Tallinn, Estonia, the largest city in the world with a totally fare-free mass transit system. (AP Photo/John McConnico)

Elizabeth Bauerle is a research scientist at the University of Washington’s medical center. To get from her home in the north Seattle suburb of Shoreline to her job on the Seattle campus, she can either drive or take two buses.

Like all of us, Bauerle weighs cost, convenience and personal values in deciding how she’ll travel to work. She says the two-bus trip can take as much 20 to 30 minutes longer than driving. That time difference would matter less to Bauerle if she wasn’t paying for the bus out of pocket, but the cost plus time has her grabbing the car keys most mornings, joining the roughly 34 percent of University of Washington employees who drive alone.

Bauerle is part of a campaign to try and change that equation for employees like herself. UW Pass or Fail — a new campaign lead by a broad coalition including university employees, the Seattle Transit Riders Union, 350 Seattle, SEIU Local 925 and others — is pushing the University of Washington to fully cover the cost of transit passes. Currently, university faculty and staff can get an unlimited transit pass for $50 a month. Though that’s nearly half the normal $99 cost for an unlimited monthly regional transit pass, the campaign argues that as a state employer with tens of thousands of employees, the University of Washington is lagging behind other state employers, Seattle universities, hospitals and large companies that provide employees with free transit passes.

Beyond simply matching comparable institutions, the campaign also argues that it makes sense for the university to encourage transit ridership both to ease congestion and further its climate impact goals.

“It is actually cheaper in the long run for [the university] to make transit free for employees than building more parking,” said Rosalie Ray, a Columbia University PhD student and contributing author of “Free Public Transit: And Why We Don’t Pay to Ride Elevators,” at a May 21 launch party in Seattle for the newly published book.

Co-edited by Jason Prince, an urban planner and faculty member at Montreal’s Concordia University, and Judith Dellheim, a researcher at the Rosa Luxumberg Foundation in Berlin, the new book comprises 19 wonky, academic essays from a variety of contributing authors. The anthology makes a collective economic, environmental and social justice case for fare-free public transit and looks case studies from cities around the world that have implemented free transit policies.

Both Ray and Bauerle spoke on a panel about free transit at the May 21 event in Seattle, which doubled as a kickoff for the UW Pass or Fail campaign.

Around 200 cities worldwide have some form of fare-free transit, whether fully free or just free for certain user groups, in certain zones or at certain times of day. As of the book’s publication, there were 97 cities and towns with fully fare-free public transit (the book uses the term fare-free transit because, of course, transit costs money whether fares or taxes pay for it).

Most of the fare-free systems are in Europe, with 21 in Poland, 20 in France and another 15 elsewhere. Estonia’s capital Tallinn, home to about 450,000 people, is the largest city in the world with a fully fare-free transit system. Perhaps surprisingly, the United States has 27 fare-free systems — mostly in small towns and colleges where the cost of fare collection out paces the revenue it raises. There are also 11 fare-free systems in Brazil, two in China and one in Australia.

“There are many cities making small and large poetic gestures [to fare-free transit],” says Prince. “Our book is trying to present the opportunity to the next city that will really do something on a big scale with transportation.”

To Prince, making that major shift is now critical. “We’re facing two great challenges in the 21st century. One is climate change. If we’re serious about mitigating the effects of carbon change we have to take strong action on transportation … the second great challenge of the 21st century is income inequality.”

“We can feed two birds with one bit of bread by attacking transport with a completely new model,” Prince says.

It turns out, cities have long made the link between air pollution and encouraging transit use by making it free. The book references a few examples, like in April 1973, overwhelmed by daily traffic jams and the pollution it caused, Bologna, Italy (then under communist rule) made buses free before 9 a.m. and from 4:30 p.m. to 8 p.m. Recognizing that free buses alone would do no good if they were stuck in traffic, the city also implemented restrictions on 75 percent of their streets such as bus and taxi only zones, streets only accessible by businesses and delivery drivers, and pedestrian only streets. After two years, the policy reduced daily traffic from 200,000 to 160,000 cars.

Beyond pollution, Bolognese planners also had quality of life in mind. In a quote cited in the new book that could well be about contemporary cities, Bologna Traffic Councilor Mauro Formaglini said, “Our goal above-all is the restoration of the human dimension of our city. … The people consider the causes of the traffic chaos and soon discover that there are clear political reasons for it.”

Many fare-free transit systems are introduced in service of economic development — think free downtown circulator buses and street cars. Tallinn, Estonia’s fare-free policy was originally introduced in 2012 in the wake of financial crisis. Residents could not afford the fare and the government was already subsidizing 70 percent of the system cost. Rather than slashing service, they eliminated the fare. City leaders assumed it would help stimulate the economy some. They were surprised to discover people moved to the city in part to take advantage of the service and the increased tax base more than offset the lost fare revenue.

The idea of free transit as a right is radical. For both Prince and Ray, it is one of the underpinnings of their work. Ray says, “Transit should be conceived of as a necessity, not a commodity … For me the best argument is that public transit is a right and access should not be limited by the ability to pay.”

Prince points to Mexico City’s Right to the City Charter as a compelling case for free transit. The charter outlines core principals of sustainable, equitable, democratic governance and standard of living. It also makes a claim that all residents, regardless of income, have a right to the city’s public spaces. Prince draws a line from there to the need for fare-free transit. After all, what good is a right to a public park, library or museum if a low-income family can’t afford the bus or train ride to experience it?

Also featured in the book, the anarcho-syndicalist Youth Federation, in Sweden, has taken a far more radical approach to the right of fare-free transit. In response to fare hikes in 2001, they launched Planka.nu (a url that translates roughly to fare-dodge.now). Members contribute to a solidarity fund that costs about US$12.46 a month, far cheaper than the $100 monthly transit pass. If you get caught turnstile jumping, your fine is covered by the fund. There is no criminal punishment for fare dodging in Sweden, so there’s no permanent record.

In addition to its survey of fare-free transit policies, the book attempts to answer some of the inevitable questions surrounding the idea of free transit, namely who will pay for it if not riders? All public transit systems require some form of subsidy already. But fare-free systems tend to rely more on taxes to fund service. Getting that funding source right is important. After all, the progressive goal of fare-free transit would be rendered moot if it was funded by a regressive tax such as sales tax that takes a larger percentage of low-income residents’ earnings than wealthy residents. In France, a small payroll tax on all employers with 11 or more employees is used to subsidize transit.

The final chapter of the book argues that cities should consider using land value capture to fund transit — the idea of capturing some of the increase in land values around transit systems and stations as a way to pay for transit. Because transit systems and stations raise the value of adjacent properties, the author Jan Scheurer, says it makes sense to tax those landowners on their increased wealth to pay for transit service.

One land value capture model not captured in the book include Hong Kong’s MTR, wherein the transit agency establishes revenue-sharing agreements with developers for the land around transit stations. Even with average fares of less than a dollar, the system typically earns surplus revenue most years, ploughing the money back into the transit system or bolstering the municipal budget. Taking a different tack from the systems featured in the new book, MTR operates with zero taxpayer subsidy. The agency is now exploring how to export that model to other countries and municipalities.

The Seattle Transit Riders Union, one of the main forces behind the UW Pass or Fail campaign, has long fought for free or reduced cost transit, including past campaigns against fare hikes, against the elimination of the downtown free ride zone, for free youth transit and more. (Recently, New York City lawmakers have also started coming out in support of 50-percent reduced fares for low-income households)

“I don’t know that we’ve ever officially adopted fare-free transit as a goal. But everything we do trends towards that,” says co-founder Katie Wilson. “It’d be nice to get to the point where public transit is thought of as a public good and something we just have and use without variable rider fees.”

The Transit Riders Union recognizes that the U.S. is likely a long way from adopting fare-free transit funded by progressive taxation, which is why Wilson says employers and especially major institutional employers subsidizing passes for employees is a common sense and responsible step to take.

“The more programs we have, whether employer programs or city funded programs or county programs, that get transit passes into people’s hands for little or no cost, the easier it is to have that conversation [about fare-free transit],” Wilson says.