Whither the Driverless Car? – Next City

Whither the Driverless Car? 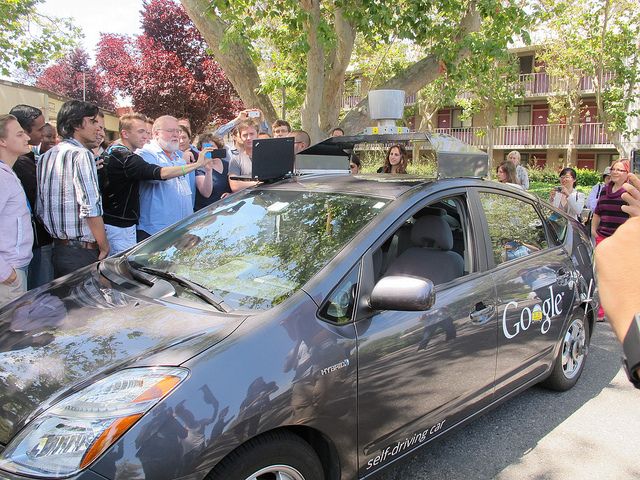 Audi and Toyota are debuting advanced prototypes of “autonomous cars,” which will provide enhanced “smart” crash avoidance and seek parking while the driver hops out and goes about her business, the Wall Street Journal reported last week. Nissan’s CEO assured reporters that its model would be in showrooms by 2020.

Google’s driverless cars have been whizzing around California roads for years. The state is now one of three — Nevada and Florida being the others — that have passed legislation allowing for such vehicles. Companies are for now only trying to phase in the product, easing the more annoying aspects of driving (like finding parking) rather than exploring the outermost limits of the technology.

“Autonomous does not mean driverless,” a Toyota executive assured the WSJ.

That probably won’t last. As the technology improves, drivers will presumably have the option of not driving at all. There are several potential advantages to that prospect. Humans aren’t very good at skillfully handling automobiles, as gruesome stats collected annually by the National Highway Traffic Safety Administration attest. America’s sprawling communities are not well suited for our aging population, many of whom could end up trapped in their homes when they lose the ability to drive safely.

But what might driverless cars mean for cities? In the 1950s and ’60s, mass motorization allowed many Americans to easily flee urban spaces and set up homes in the suburbs (and, later, the exurbs). Will the driverless automobile continue, or even perpetuate, those trends? Or could it redefine our relationships with cars, perhaps through a radical extension of Zipcar-esque schemes?

If self-driving cars become the main form of transportation, there is no practical reason to own a personal car. Think about it, when cars are in storage approx. 95% of the time, that is a wasted resource. This is the reason that we require so much parking. What if during that 95% of downtime, the cars were off handling other trips like driver-less taxis? When you needed a car, you summon it and it appears Batmobile style within seconds, or at the worst a few minutes.

How great would that be? You no longer have to worry about maintenance or parking and you get to split the cost of the car with everyone who uses it. Parking would free up all over the city because it is no longer needed. You don’t get stuck with a single car. If you need a 7 person SUV, you get it. If you need a pickup truck, you get it. If you need a single passenger vehicle, you get it. And since you aren’t tied to your car, you might even walk more. Previously you would drive that 1 mile to the grocery store, now you may walk it and simply opt for a ride back. The sunk cost of owning and operating a car would vanish. You would only pay for what you actually use. [sic]

Reducing dependence on single-occupancy vehicles would be an unalloyed good for cities. No matter how efficient driverless cars become, it seems unlikely that they could minimize congestion as effectively as, say, fewer cars and more mass transit users and pedestrians. More people walking means more people spending money at local businesses, safer streets and better-connected communities. Mass transit would be cheaper since labor costs would fall sharply (as a major segment of urban employment is marginalized or eliminated).

But it’s hard to imagine a majority of Americans willingly parting with not only control over their cars, but the actual physical ownership of the vehicle itself. Millenials are driving less than their parents, but car culture in the U.S. is going nowhere fast. In 2011, despite declining wages and rising fuel costs, 106 million of 138 million working Americans commuted alone.

And outside the drudgery of lengthy commutes, a lot of people simply enjoy driving. Cars have long been indicative of freedom, status symbols connected to what it means to be an American. Optionally, driverless cars could give suburbanites an easier commute, and substantially decrease the riskiness of their weekend barroom excursions, mitigating the micro-level negatives of car travel.

Costs will be the real determinant. The 2020 models will surely be far too expensive for the average consumer, but prices will just as surely drop as time goes on. Owning a driverless car would presumably be just as expensive as owning an ordinary one: It would still need repairs and fuel at the very least. The increased freedom granted to the elderly and disabled cannot be overemphasized, but these populations are also poorer and often on a fixed income. Could they afford a driverless car? Furthermore, it’s unlikely that an individual with a preference for urban living, and not paying for constant auto upkeep, decamping for the suburbs simply because she could take a nap on her hour-long commute to work.

Or the advent of driverless cars, on their own, could merely enhance the preferences of urban and suburban dwellers, without decisively tilting the scales in one direction or the other. Those already predisposed to live in a central city and use car share would presumably love an enhanced on-call version of the same service, while those who want to live in the country will embrace safer and less arduous commutes.