When You Can’t Afford “Affordable” – Next City

When You Can’t Afford “Affordable” 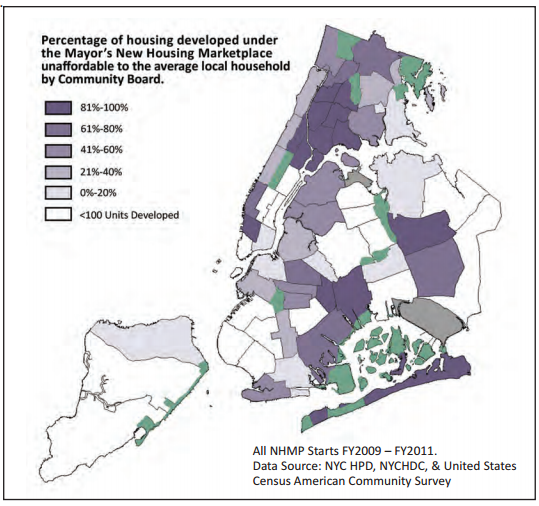 “Affordable housing” is one of the trickiest terms used in real estate development, and a report released this month helps explain why.

The Association for Neighborhood and Housing Development, a New York-based non-profit, took a look at its city’s ongoing affordable housing program and found that up to two-thirds of the units built since 2003 are too expensive for residents earning their given neighborhood’s median income. (The median household income for New York City as a whole is about $51,000, according to census numbers.)

So even when housing developers meet the standards set forth by New York City’s affordability requirements, there’s a good chance low- and middle-income people from the area still won’t find an affordable place in their buildings.

Additionally, about one-third of units built under the affordable housing program have an upper income limit — that’s the maximum amount residents in these units are allowed to earn — above the actual city median income.

In a story on the report last week, the New York Times digs into how these loopholes came about:

Housing advocates say the city relies heavily on federal housing subsidies and, as a result, is constrained by federal income guidelines for occupants. They say the federal government estimates that New Yorkers earn more than they actually do for several reasons, including because the government uses a complex formula that factors in income levels in wealthier suburban counties and not just in the five boroughs. On top of that, they said, the federal guidelines also account for the fact that rents are higher in the New York area than nationally.

The New Housing Marketplace Plan, a 10-year, $7.5 billion effort begun in late 2002 under Mayor Michael Bloomberg, pledges to “create or preserve” 165,000 units of affordable housing in New York City by the end of this year. (Initially enacted as a five-year program with an end goal of 65,000 affordable units, the plan was expanded to its current scope in 2006.) The breakdown is 92,000 new units built and 73,000 existing units preserved, which means their prices wouldn’t rise above what’s considered affordable.

It’s the definition of “affordable” that presents the issue.

This ties into why Atlantic Yards, the largest-ever NYC development outside Manhattan and the subject of a lengthy assessment by Dan Rosenblum this week, has generated so much controversy. Developer Forest City Ratner has promised that 2,250 of the 6,400 housing units in Atlantic Yards’ 16 slated high rises will be affordable. (Construction of the residential component of the project, which also includes the now-opened Barclays Center sports arena, will begin this year and wrap up, if all goes on schedule, in 2035.)

Rosenblum explains why this is so problematic:

The affordability requirements tie into structural criticisms that housing organizations have long opposed. Like at other developments in New York, the Atlantic Yards affordability requirements depend on the Area Median Income calculation that includes wealthier parts of New York and its suburbs. Though the American Community Survey estimated the median income for a family of four in Brooklyn was less than $45,000 in 2011, the AMI uses a median of $83,000 to factor its affordability. At least 20 percent of the subsidized units in B2 are reserved for families making more than $100,000. In short, spaces reserved for “working-class families” will go to wealthier New Yorkers.

The median income in zip codes near Atlantic Yards ranges from $34,000 to $94,000, though some census tracts dip much lower. In a nearby tract that includes two large federal housing projects, the median income only reaches $9,650.