When the Wells Run Dry – Next City

When the Wells Run Dry 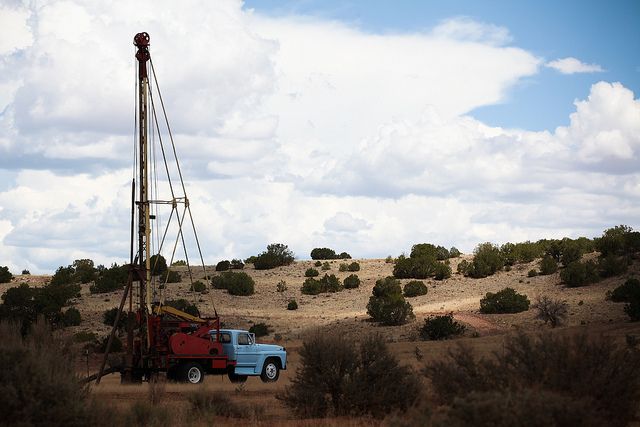 A well digging truck in New Mexico. The town of Magdalena, N.M. had to drill a new well after its existing water source ran dry in June. Credit: Jared Tarbell on Flickr

For three painful years, the town of Magdalena, in central New Mexico, has struggled with drought along with the rest of the Southwest. As the months of dry weather have piled up, one after another, people all over the region have wondered when it will end. And how bad could the situation get?

In June, Magdalena suddenly found out just how bad: The primary well serving this town of about 1,000 people ran dry. Businesses, including the local health clinic, were forced to shut down. Drinking water, some 46,000 gallons of it, was trucked in from nearby communities to keep the community going while another well was drilled. Bottled water was distributed to the elderly and families with young children. The National Guard stood by to monitor the situation.

The question of why Magdalena’s well ran dry has yet to be fully resolved. According to news reports, town officials admitted that they had not checked water levels in more than a year. Their failure to do so is particularly surprising in light of the way groundwater supplies in New Mexico have been falling. Since January of this year, the water table is down by as much as 20 feet.

Depleted groundwater is a problem all over the Southwest in this dry season, and New Mexico is one of the states that has it the worst. Last week, a state task force released a report that shows as many as 300 communities have water systems vulnerable to the same combination of factors that led to the sudden failure of Magdalena’s supply: Drought, falling water tables, limited sources of drinking water and aging infrastructure — which is often monitored by volunteers rather than water professionals.

“We’d like to get people in the state to change the way we think about water,” Ryan Flynn, secretary-designate of the New Mexico Environment Department, told the Albuquerque Journal. “We just turn the tap and expect the water to flow.”

The state is now offering help in monitoring water levels, identifying backup supplies and emergency planning. It will also help local officials connect with possible federal funding sources for infrastructure improvement. Officials will send letters to the nearly 300 communities most at risk, letting them know assistance is available.

These proposals were hailed by the Journal, which ran an editorial saying, “New Mexico’s communities need a water plan — and a backup water plan — sooner rather than later. The state deserves credit for recognizing this and making it a priority.”

The question is why it wasn’t a priority sooner.

Two-thirds of New Mexico is currently facing extreme to exceptional drought conditions, according to the National Weather Service. From January to June, precipitation was just 44 percent of normal. State officials say the situation is worse than it was during the last bad drought in 2002 and 2003. Almost all of New Mexico’s reservoirs are well below average capacity for this time of year.

In a news release at the end of June, the U.S. Department of Agriculture’s Natural Resources Conservation Service issued a grim forecast for the rest of the year in the Southwest, due to a thin snowpack that will fail to refresh the region’s streams and rivers.

“The soil in the southern half of the West is like a dry sponge that will absorb and hold water as it melts from the snowpack,” NRCS hydrologist Tom Perkins said in a news release. “Only when the soil is sufficiently saturated will it allow water to flow to the streams.”

“I started forecasting in 1983, and I don’t think I’ve ever seen a black symbol before,” Perkins said. “This year we have several black symbols in New Mexico.”

The poor state of water infrastructure is also a matter of record. The American Society of Civil Engineers gave New Mexico’s drinking water system a C- in its 2012 Infrastructure Report Card, noting that aging systems won’t hold out without repair and rehabilitation. The group also pointed out the perils of the state’s reliance on groundwater: Because the region sees so little rainfall even in normal years, 95 percent of community water systems are partially or entirely dependent on groundwater.

“Water conservation at all levels/types of use will need to be promoted by all suppliers/purveyors,” the ASCE report noted. “Because groundwater is being depleted in many locations, there must be an increased emphasis on: decreasing dependence on groundwater, groundwater recharging, conservation measures, and on alternate potable water sources.”

Perhaps that effort is finally beginning in earnest. Meanwhile, the residents of Magdalena and hundreds of other towns around the state are watching the skies, hoping that the worst doesn’t happen again.