Seattle Could See Return of Bike-Share This Summer – Next City

Seattle Could See Return of Bike-Share This Summer 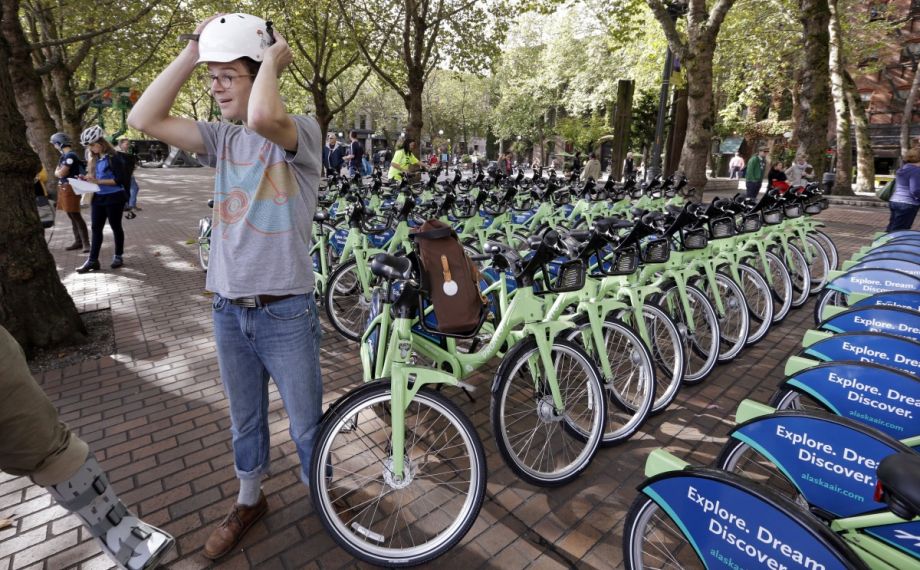 In January, Seattle Mayor Ed Murray announced the city was canceling plans to revamp the Pronto bike-share system and would instead shut the whole thing down at the end of March. He left the door open for a second attempt at Seattle bike-share, but it was clear it would be a low political priority for a while. Now, less than two months after Pronto’s bikes and stations were decommissioned, there are plans afoot to launch a bike-share pilot project (or three), possibly even as soon as this summer.

Two private bike-share startups from the San Francisco Bay Area, Spin and Lime, and one from Beijing, BlueGoGo, have all announced their intention to bring their bikes to Seattle. Unlike Pronto (and most of the major U.S. bike-share systems) the companies use “dockless” bikes.

In response, the City Council and Seattle Department of Transportation are working on figuring out private bike-share regulation. Council Member Rob Johnson says they’re aiming to have a framework ready “no later than mid-June. We could ideally have bikes out on the streets by July 1.”

With dockless systems, instead of checking bikes into and out of stations throughout the system area, riders use an app to find and unlock GPS-enabled bikes. As is often the case with startups, the companies are offering their product for cheap. Spin for example will cost $1 per half hour, much cheaper than most docked systems. (Though without the monthly or yearly membership option that most docked systems have, dockless systems could cost frequent users more in the long run.)

Private, dockless bike-share companies have been commonplace in China for a few years now. Many of them are backed by hundreds of millions and even billions in venture capital, which has allowed them to flood cities with bikes and charge next to nothing for rides. In some cities such as Shenzhen, people have left piles of abandoned and broken bikes on street corners.

That has left some U.S. bike-share advocates nervous that Spin, BlueGoGo and others might do the same in American cities. The National Association of City Transportation Officials (NACTO) calls them “rogue bike-share operators.”

“It’s less about the technology per se, than the way the systems have tried to come into U.S. markets and cities,” says Kate Fillin-Yeh, NACTO’s director of strategy. “It’s unclear if their [financial model] actually makes sense.”

Her concern is that venture capital-backed companies will flood U.S. cities that already have systems in place, undercut those with cheap prices, put the docked system out of business, then go out of business themselves because they can’t make enough money. “If something looks like it’s too good to be true, maybe it is,” she says.

Spin CEO Derrick Ko says that’s not his company’s plan. “There are definitely some fly-by-night companies, some foreign companies eyeing the U.S. to see if it can be done here with the same models [as China],” he says. “We respect the city, we want to work with the city and treat them as partners, not adversaries.”

He says that much like traditional bike-share systems, Spin will have staff that redistributes bikes to make sure they don’t all end up in one spot in the city and, “people on the street to inspect bikes and make sure they’re safe to ride.”

Fillin-Yeh is unconvinced. Spin did a pop-up launch with a few hundred bikes during this year’s South by Southwest festival in Austin. According to her, the bikes had serious mechanical problems. “After a week’s worth of biking, those bikes were ripped to shreds. Bent seat posts, pedals falling off, all this crazy stuff.”

Spin did not confirm or deny if their bikes broke in Austin. A spokesperson said the bikes they plan to use long term were not yet available so, “we used a fleet of off-the-shelf bicycles as stand-ins for the purpose of the SXSW festival pop-up.” She said that the bikes Spin will use in Seattle and other cities are certified by the U.S. Consumer Product Safety Commission and are also undergoing certification to meet the International Organization for Standardization’s bicycle standards.

“That’s exactly why we want a pilot project,” says Council Member Johnson. “It allows us to test things out and learn some lessons. See which providers are acting in good faith and which might be those fly-by-night companies.”

He explains that he’s looking for four main things from the companies as part of the regulatory framework. The city wants data from the companies about how many people are riding and where. They want to establish safety expectations. “How do we make sure we’ve got bikes that are well maintained? How do we make sure riders know about helmet law requirements? Know bikes aren’t going to be piled up blocking sidewalks,” he asks. They want evidence that the systems will be sustainable long term. And finally, Johnson says, he’s concerned about companies equitably distributing the bikes. “As we think about expanding from pilot to permanent program, we need to make sure bike-share bikes are able to be accessed by people all throughout the city,” he says.

And if the startups can do all that and prove to be successful and sustainable, Johnson says, “I think relaunching city-owned bike-share would be off the table.”