Cleveland is one of many U.S. cities impacted by state preemption laws. (Photo by Aeroplanepics0112 via Flickr)

It’s no secret that the gulf between the social values of cities and the state governments that control them has been widening a long time. Cities skew Democratic, while in 25 states Republicans control both houses and the governorship. But with a Republican stranglehold over the federal government as well, the battle over preemption laws is heating up. A new report by the National League of Cities tallies which states have passed laws to restrict cities’ autonomy, and looks at how cities might fight back.

“State preemption efforts can lead to a loss of control for cities, and ultimately the control of the citizens that vote in their elected leaders,” says Clarence E. Anthony, executive director of the National League of Cities, who characterizes this as a time of transition in the relationship between city leaders and their state-level counterparts.

In recent years, movements to raise the minimum wage, provide paid sick leave, and guarantee protections for trans residents in particular have gained momentum in cities from Seattle to New York to Charlotte, North Carolina. But in the latter city, and many others, state preemption laws have prevented measures adopted by city councils and approved by voters from actually being implemented.

In North Carolina, the hotly contested HB2 not only struck down a local Charlotte ordinance that allowed trans people to use the bathroom of their choice and prohibited the passage of further anti-discrimination ordinances, but it also eliminated cities’ authority to increase the minimum wage over the state minimum. Despite the economic fallout of North Carolina’s so-called “bathroom bill,” 11 states followed suit.

The NLC report, “City Rights in an Era of Preemption: A State-by-State Analysis,” focuses on seven forms of preemption: those that restrict cities’ ability to pass laws regarding the minimum wage, paid leave, anti-discrimination protection, ride-sharing, home-sharing, municipal broadband, and those that place limitations on local tax and expenditure decisions. But those aren’t the only areas in which states are trying to strip cities of control. Preemption laws have also been passed or attempted around plastic bag ordinances, gun control, nutrition, rent control and, recently, funding for sanctuary cities. 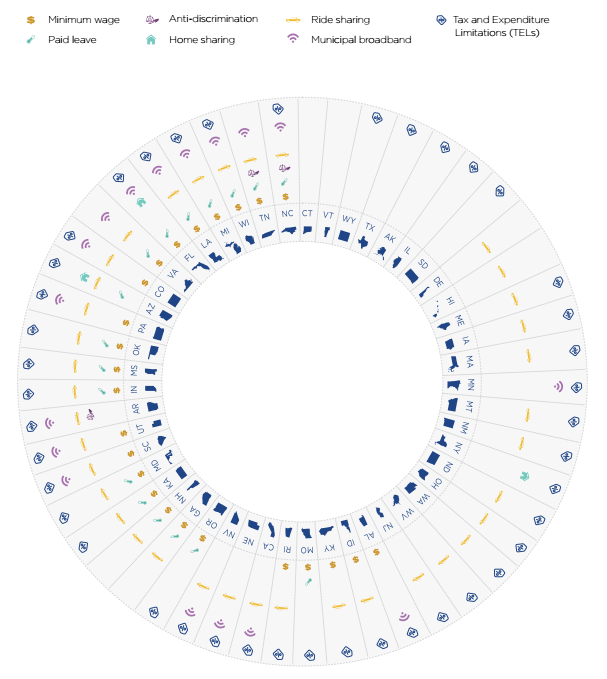 The report notes that preemption has its own vocabulary. Legislation might grant the state “exclusive” or “sole” regulatory authority over a certain issue, or decree that local laws can be no more “stringent” or “restrictive” than those passed by the state. Localities in all but two states — Connecticut and Vermont — are limited by some form of preemption. A whopping 42 states have tax and expenditure limitations of some kind, which restrict local authority to raise taxes, spend revenue or both.

Along with growing anti-sanctuary city legislation, which the report does not examine, legislation blocking minimum wage increases is swiftly on the rise. As the report notes, 2016 was the year of “fight for $15,” but it was also the year of minimum wage preemption. Even as 23 cities and states raised wages that year, Alabama and North Carolina both passed laws preventing increases, bringing the total number of states with preemption laws to 24.

“In the past, general limitations such as tax and spending limitations seemed to dominate. We’ve noticed, however, that the trend has been shifting toward legislation that is introduced on behalf of a particular industry to exempt them from local authority,” says Kim Winn, executive director of the Virginia Municipal League.

In her state, that’s included Uber and Lyft lobbying to be exempt from taxi regulation, and Airbnb asking for exemption from land use regulation. Across the country, 37 states have some sort of legislation on the ride hailing apps, while three regulate home-sharing. This legislation cuts both ways: Colorado was the first to legalize TNCs statewide, requiring drivers have insurance and undergo background checks, while Virginia attempted to ban Uber and Lyft. Either way, these laws can prevent local governments from regulating the companies as they see fit.

But cities aren’t taking this lying down, and their attempts to fight preemption have often been bolstered by the courts. Matt Zone, NLC president and Cleveland council member, cites a battle over hiring practices in his own city. Several years after Cleveland adopted an ordinance requiring a certain percentage of work hours on large construction projects be performed by local and low-income residents, the state passed legislation barring local hire quotas. A court struck it down in January, saying the state had overstepped its constitutional bounds. “So that was a huge success for local government,” says Zone.

Last June, Miami Beach’s City Commission unanimously voted to increase the minimum wage from the state minimum of $8.05 to $10.31, despite a preemption law. “We know that wages have not kept up with the cost of living, which is felt more acutely in South Florida communities like Miami Beach,” said Mayor Philip Levine. “Our residents and workers are counting on their leaders to stand up for them after seeing Tallahassee continuously roadblock progress. So to the state, I say, see you in court.”

He’s getting his wish: The state of Florida joined business groups in a lawsuit against the city earlier this month.

The NLC report advises cities to pick their preemption battles, and to try to halt the preemption narrative before it starts — the idea that cities are out of control, and states need to reign them in. Winn says her organization focuses its energy on informing legislators, who frequently do not understand how bills will affect cities they do not represent. Brooks Rainwater, director of the Center for City Solutions at NLC and a report co-author, says the uptick in preemption laws is also tied to model legislation being pushed by organizations like ALEC. These pre-written laws make it easy for legislation to spread quickly state to state.

Both Democrat- and Republican-controlled states rank among the top 10 for number of preemption laws, but Rainwater says there’s a clear trend in where they tend to take hold. “Certainly we’ve seen this take place where concentrated political power at the state level doesn’t line up with politics at the local level,” he says. Thanks to gerrymandering, that concentration of political power tends to tilt in one direction, and it’s not in the direction of cities. Needless to say, there are no states with Democratic statehouses and predominantly Republican city halls.