When Numbers Lie – Next City 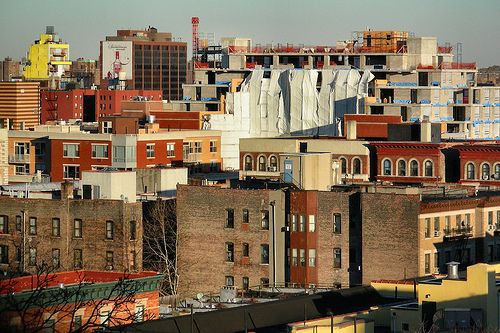 More than a handful of people have left comments challenging Sam Roberts’s recent New York Times article, “No Longer Majority Black, Harlem is In Transition.” Perhaps most irksome is that Roberts includes Columbia University and its environs as part of the neighborhood. (For an idea of what that means statistically, note that 11.4% of Columbia’s 2007 incoming class identified as black; some 1050 students are admitted every year. And that doesn’t even begin to represent the vast difference in character between Morningside Heights and central Harlem.)

So I’m left wondering at the real motivations, and anxieties, behind the article. It seems that the piece has more to do with general anxiety regarding Manhattan’s affordability – or lack thereof – than with a meaningful demographic shift. As James Bauchner, the white man pictured in the article with his daughter, points out, “In Manhattan, there are only so many directions you can go. North to Harlem is one of the last options.” One of the other “experts” cited in the piece said something similar: “Mr. Dodson of the Schomburg Center moved from Riverside Drive to Newark not long ago. He said, ‘I tell people that I can’t afford to live in Harlem or in New York in the manner I deserve to.’”

Even more disappointing, given the Times’s framing this shift as a whites-only land-grab, is that the paper fails to take into consideration the neighborhood’s burgeoning entrepreneurship. In fact, the few quality restaurants in central Harlem – all of which have opened since 2006 – are owned by African Americans: Native, on 118th and 6th, was for years the only game in town; Nectar Wine Bar, 121st and Frederick Douglass; Les Ambassades; 67 Orange Street and Society (owned by the same proprietor); to say nothing of the iconic Sylvia’s and Amy Ruth’s. These delicious restaurants (I’ve eaten at all of them) represent the few options, aside from the chains on 125th Street, for dining out in the neighborhood.

Perhaps equally important, as a former white resident of central Harlem, is that this so-called power shift is not at all palpable on the street. During my time uptown – I was a resident before the economy nosedived, and lived there until a few months ago – I was repeatedly called “snowflake” and “cracker,” and was one of a handful of white people among the hundreds who poured in to Sylvia’s to watch President Obama’s acceptance speech. When it came to walking down the street, whites were definitely in the minority.

Articles like these light fires – that’s why it has been among the top-ten most-emailed since it was published – but numbers alone don’t add up to a sufficiently-nuanced portrait of daily life in the neighborhood.