When Cities Must Handle a Crisis – Next City

When Cities Must Handle a Crisis 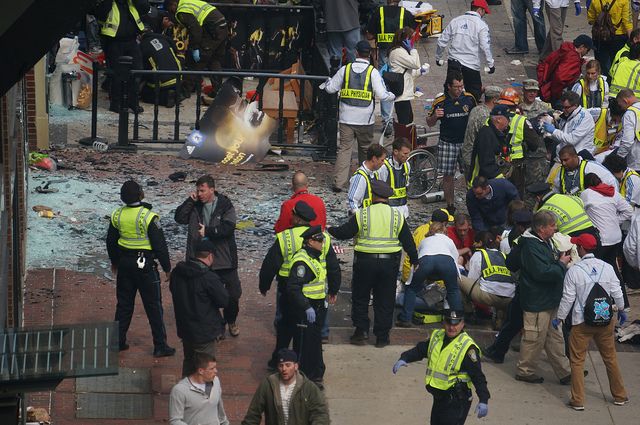 The scene on Monday after two bombs detonated near the Boston Marathon finish line during the race. Credit: Aaron Tang on Flickr

The bombings at the Boston Marathon on Monday have many asking what can be done to prevent future killings on the streets of U.S. cities.

Several commentators have already weighed in on what shouldn’t be done. Writing for The Atlantic, cryptographer Bruce Schneier called for Americans to resist getting swept up in fear politics. “When we react from fear,” he wrote on Monday, “when we change our laws and policies to make our country less open, the terrorists succeed, even if their attacks fail.”

In a similar post today, Salon’s Alex Pareene begged readers to avoid such overzealous reactions as “getting every flight with people who look Middle Eastern grounded, banning backpacks from public spaces or launching any wars.”

But beyond resorting to police-state tactics, what are some ways local authorities can thwart roadside bombings on U.S. soil? (That is, besides the obvious step of tracking down and arresting those responsible for the Boston attack.)

Thomas Wieczorek, director of the Center for Public Safety Management at the D.C.-based International City/County Management Association, understands the necessary limitations put on security measures in an open society. His organization provides a combination of technical assistance, training, education, research and product development on public safety issues to cities around the country, dealing with police, fire, EMS and homeland security services.

For Wieczorek, the best course of action involves preparing for when incidents like bombings actually happen, rather than pretend as if authorities can stop every single bomb from going off.

“Unless we are going to vastly regulate movements,” Wieczorek said, noting that police can’t search every person coming into an well-trafficked urban area, “it’s really difficult to prevent something like [a bombing] from happening.”

Instead, he stressed to look at what went right in Boston: The city clearly had emergency plans in place and managed to carry them out swiftly and efficiently. Authorities rerouted thousands of runners away from the blast zone within minutes of the two explosions. Medical staff was on hand and ambulances were ready. Listening to the radio, Wieczorek noticed the clear communication between responders, who were able to dispatch resources and appropriately triage cases on the scene. It was everything you’d expect from a good emergency response. Three lives were lost, but the body count could have been far higher.

“How can you plan for the unexpected to the best extent possible,” Wieczorek said, “and then exercise it?”

Just as important as having a plan is making sure the city remains capable of carrying it out. As funding from both local and federal sources continues to wane, there are fewer resources to devote to adequate training and aging equipment. After 9/11, public safety policy across the country shifted to include a much greater focus on man-made catastrophes, and pretty much everyone was vigilant in staying prepared. But in the intervening years, attention has tended to shift elsewhere and training has fallen off — something that Wieczorek warned has potentially disastrous consequences.

“The further you get from an event, the more complacent people become,” he said. “And that’s the real danger, because terrorists and those that wish to do harm never reach that level.”

In addition to a thorough response plan, another way cities can mitigate the effects of bombings and other incidences of mass violence is through urban design.

Michael A. Sheehan, an assistant secretary in the U.S. Department of Defense known for his 2008 book Crush the Cell, which criticized wasteful and ineffective counterterrorism policy, touched upon this subject in a 2007 interview with Buildings.com.

“The main issue in New York City, and many urban environments concerned with terrorism, is to find the balance between security and critical infrastructure while maintaining a welcoming environment for business, residential, investment, tourism and residences,” Sheehan, a former counterterrorism deputy commissioner with the NYPD, said at the time.

He argued for infrastructural improvements to reinforce structures against blasts over fortress-like streetscape measures, such as Jersey barriers — a physical manifestation of the balancing act cities must perform between public safety and their residents’ freedom of mobility.