What’s the Latest on Opportunity Zones? – Next City

What’s the Latest on Opportunity Zones? 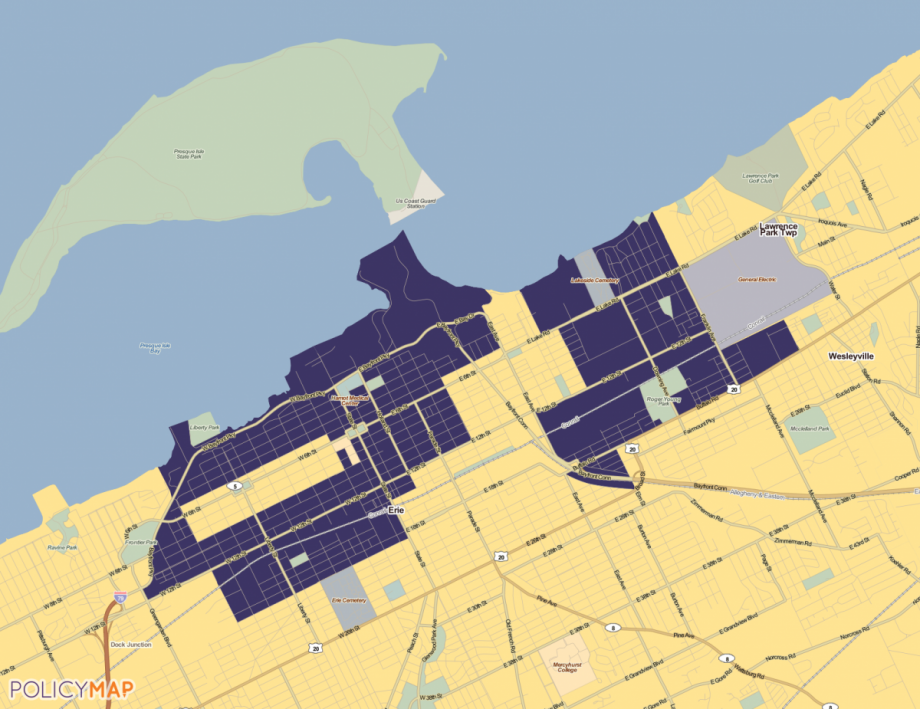 Parts of Erie, Pennsylvania, can soon thank Opportunity Zones for free WiFi, even though the city itself was never guaranteed to see a dime of investment via the new federal tax incentive.

As part of its strategy to court investors and businesses, Erie itself is investing in free WiFi for its eight designated Opportunity Zones, GovTech reported. It’s one of the rarer tactics that various cities, counties and states are using to stand out from the crowd as they vie for attention from the relatively small slice of people and corporations who have the requisite net worth to take advantage of the tax break.

And it is quite a crowd so far. Some 8,700 census tracts around the country received designation as Opportunity Zones last year, making them eligible for investment via the new tax break on capital gains income. Only one city — Boulder, Colorado — took the extraordinary step of telling developers and investors to hold their horses while it updated the zoning and land use regulations in its lone Opportunity Zone census tract. The city is now ahead of schedule to lift its temporary moratorium on Opportunity Zone construction and demolition permits later this month.

Other cities had recently updated their zoning and land use regulations and were able to convince governors to align their states’ designated Opportunity Zones with priority areas under those updates.

In Alabama, Birmingham Mayor Randall Woodfin has been one of the more prominent Opportunity Zone boosters, announcing the Birmingham Inclusive Growth initiative in April, which is now live. There are 24 Opportunity Zones in Birmingham, touching 77 out of the city’s 99 neighborhoods. Similar to the Erie campaign, the platform intends to identify and fund Opportunity Zone projects that offer goods and services needed by communities.

Alabama, Oregon, Minnesota and Louisiana, as well as the cities of Atlanta, Cleveland and Akron are all also listing projects on The Opportunity Exchange, a Cleveland-based startup seeking to become a curated national hub for “high-impact” Opportunity Zone projects.

Plenty of states are joining in the Opportunity Zone party through tax policy — Maryland, Connecticut, New York, Ohio, Alabama, Louisiana, Minnesota, California and Hawaii are just some of the states that have passed or are on the way to passing some kind of legislation to further incentivize investment in their designated Opportunity Zones through their tax codes.

The flexibility of the incentive has proponents excited about the possibilities of leveraging the program to meet the needs of historically disinvested communities. Several prominent foundations are attempting to tip the investor scales in the direction of projects that are more likely to benefit existing opportunity zone residents.

The Kresge Foundation partnered with two firms managing Qualified Opportunity Zone Funds which committed to standards for transparency, community involvement and impact, and metrics and reporting. In exchange, the foundation has provided a guarantee against investor losses for each fund. (Kresge also provides funding to Next City.)

Meanwhile, the Rockefeller Foundation is rolling out partnerships with six cities to cover the salaries for a Chief Opportunity Zone Officer, embedded in city government or city economic development agencies; as well as salaries for two community engagement specialists to support and facilitate community engagement and involvement in proposed Opportunity Zone projects and businesses. So far, Newark and Atlanta have been announced as part of the initiative.

The state of New Jersey is running its own competitive grant program, inviting counties and municipalities to submit proposals for up to $100,000 each to fund the implementation of community-specific plans to attract Opportunity Zone investment to projects that are likely to benefit each community in some way.

New York City Council Speaker Corey Johnson is among those sounding caution over Opportunity Zones. His office submitted a comment to federal regulators and he penned a recent op-ed outlining his concerns. Without frequent reporting and transparency, Johnson is worried the tax break could destabilize entire neighborhoods as investors speculate on rising rents.

“Monitoring and evaluation together could also help cities focus initiatives — such as tenant right to counsel and support services for small businesses at risk of displacement in communities with rent-stabilized housing, pockets of poverty, or residents and businesses otherwise at risk of displacement, that may become more vulnerable as a result of the Opportunity Zones program,” Johnson wrote to regulators in July.

Another interesting set of comments submitted to federal regulators in July revolve around the issue of vacant properties. The Internal Revenue Service is still in the process of finalizing regulations around Opportunity Zones, and some have pointed out that under the currently proposed regulations, there is a hidden incentive to acquire Opportunity Zone buildings, clear them of tenants and hold them vacant for a period of time before selling to a Qualified Opportunity Zone Fund.

The current version of the regulations state that if the investment is a property, the Qualified Opportunity Zone Fund must “substantially improve” the structure. In an oversimplified example, say the fund acquires a building for $5 million, and the land beneath is appraised to be worth $1 million, while the building is worth $4 million. The “substantial improvement” requirement says the fund must spend another $4 million plus one dollar on making improvements to the property. However, there is currently an exception — if the building had been vacant for the previous five years, the fund wouldn’t have to spend that money in order to qualify for the tax break.

The thinking behind the vacancy exception is that it would incentivize investors to re-activate vacant properties. But some advocates fear the unintended consequence would be current owners clearing out tenants now in anticipation of selling to a Qualified Opportunity Zone Fund later.

“Property owners, in efforts to make their properties more attractive to Opportunity Zone investors, could deliberately cause them to become vacant,” writes Akilah Watkins-Butler, president and CEO of the Center for Community Progress. “This type of strategic vacancy is particularly harmful in the residential rental housing and small business contexts, creating an economic incentive for landlords to displace tenants to enhance the market value of their buildings.”

The National Community Stabilization Trust suggests reducing the minimum threshold to qualify for the exception to the substantial improvements threshold, The Center for Community Progress and the Center for Budget and Policy Priorities say the exception should be eliminated entirely — any building acquired by a Qualified Opportunity Zone Fund, they say, should be subject to the substantial improvements spending requirement.

There is still much that is uncertain about Opportunity Zones — how much capital will flow through the tax incentive, who will benefit, will there be any unintended harm as a consequence of new capital flows. Other than investors, only one other group so far is definitely benefiting from the tax incentive: whoever currently owns property in Opportunity Zones. Real estate sales have already surged inside the Zones since they were designated in mid-2018, as data from Real Capital Analytics clearly show. Meanwhile, another study, from MIT, shows prices have gone up, 14 percent for Opportunity Zone buildings and 20 percent for vacant Opportunity Zone land.