What’s on the Table for CT Transportation – Next City

What’s on the Table for CT Transportation 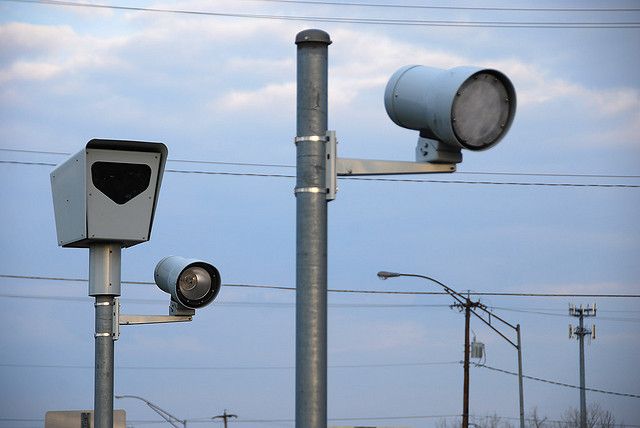 One bill would would allow Connecticut municipalities to use red light cameras to enforce traffic laws. (Pictured cameras not in Connecticut.) Credit: Gary Brown on Flickr

Connecticut Gov. Dan Malloy’s budget, and the intense pressure to craft a response to the 2012 shootings in Newtown, have loomed over the state’s legislative session since its opening day. But nearly two months into the session, many transportation issues have been raised in his budget, and some new transportation bills are being formed as well. Here are some to watch.

Protecting vulnerable road users: Near the top of the list for safety advocates is a vulnerable user bill, introduced by Sen. Beth Bye, that would enhance penalties for careless drivers who injure or kill pedestrians, cyclists, highway workers and other vulnerable users of the road. (The legislation is identical to last year’s bill, which passed the State Senate unanimously but was never voted on in the House). Multiple organizations testified in support of the bill at a legislative hearing on February 13, including Tri-State Transportation Campaign, the state Bicycle and Pedestrian Advisory Board, Connecticut Fund for the Environment, Bike Walk Connecticut and Regional Plan Association. Also submitting testimony in support were AARP, the Sierra Club and Transit for Connecticut. Earlier this week, the Transportation Committee voted to draft the legislation as a committee bill, the first step toward passage.

Single-file cycling: Cycling and community advocates have been beating back two bills (SB103 and HB5246) that would make it illegal for cyclists to ride side by side. The sponsor of one of the bills, Sen. Kevin Witkos, said his bill was intended to improve safety, but that since introducing the bill, he “got schooled from the advocacy groups about how it’s not that simple.” As the state’s Bicycle and Pedestrian Advisory Board has pointed out, current law already states that cyclists cannot ride two abreast if doing so will impede traffic.

Lockbox: Many legislators argued that increases in transportation revenue should be accompanied with stronger protections for the state’s Special Transportation Fund. The fund is often raided by state politicians — and would be raided again in Malloy’s proposed budget. Several bills would attempt to stop diversions from the STF; one that appears to have momentum has been introduced by Rep. David Scribner, but it’s unclear whether anything but a constitutional amendment can fully stop the diversions. In testimony, Tri-State suggested not just locking the lockbox, but “putting an alarm on it” by requiring a public announcement any time there is a diversion from the fund. Advocates have proposed similar legislation in New York.

Paratransit: The Transportation Committee is seeking to provide more funding for paratransit, which Malloy’s budget seeks to cut. A bill from Sen. Paul Doyle and Committee Co-Chair Antonio Guerrera would provide an additional $5 million for service.

Smart growth: Senate President Don Williams has introduced a bill ”to align economic development efforts with state-wide planning objectives for municipal growth and agricultural and open space preservation.” The legislation is a one-paragraph “shell bill,” meaning that more specific proposals will be inserted later. One of those proposals ought to be the preservation of the Community Investment Act. Language in the bill should also aim to better align the state’s existing economic development programs, like the Urban Site Investment Tax Credit Program and Small Town Economic Assistance Program, to be more closely targeted to transit-oriented locations.

In-lieu sidewalk fees: A bill from Rep. Jason Perillo (HB5966) would authorize municipalities to allow developers to pay “in-lieu fees” into a sidewalk fund, rather than building sidewalks on their property. Rather than requiring developers to build sidewalks in areas without proper connections, towns could use the in-lieu fees to close high-priority gaps in their sidewalk networks. As currently written, however, the bill may provide too much leeway for developers to avoid making sufficient contributions and language should be expanded to allow the funding to include other types of pedestrian safety and traffic calming infrastructure like bike lanes and pedestrian crossing islands.