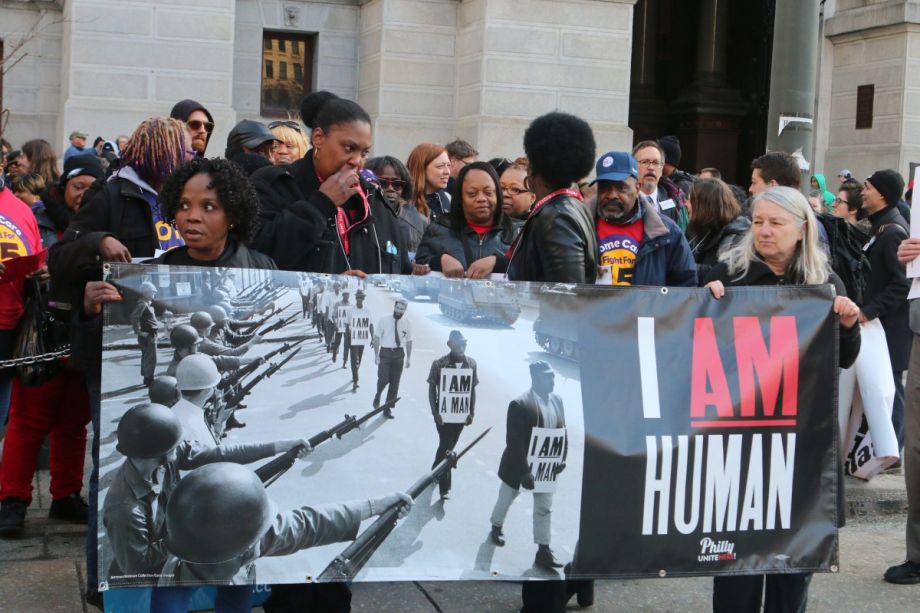 POWER, faith leaders, and elected officials held a one-day fast and press conference to announce the “I Am Human” Campaign, which calls for a raise in the minimum wage and an end to state preemption blocking local wage laws in Pennsylvania. (Credit: POWER)

In the last two years, we’ve seen the extreme cases of minimum wage increases being rolled back in St. Louis and Birmingham, Ala. North Carolina was in the national spotlight last year when the state legislature voided a Charlotte non-discrimination bill, while also removing municipal authority to pass LGBTQ civil-rights legislation as well as to raise the minimum wage and even strengthen child-labor protections.

These are not isolated cases. A closer look at the wave of preemption laws shows some extremely troubling trends.

First, when we look at what is now prohibited at the local level and what rules are in place at the state level, we can see that corporations are driving sweeping deregulation. They are clearing the field of laws that would benefit workers, consumers and tenants. Most or all of the states that prohibit local standards related to wages, benefits, scheduling, construction jobs, or housing affordability have minimal or no state regulation related to those issues. In other words, while preemption advocates are rushing to establish ceilings on local standards, they aren’t also setting very many floors at the state level that guarantee minimum protections or standards.

Transportation network companies like Uber and Lyft have been particularly successful in deregulating their industry in this way. Laws adopted in 41 states prevent local governments from regulating these companies across a broad range of issues, including licensing, background checks, vehicle safety, data-reporting, and driver employment status. At the same time, most of these laws provide for little or no regulation at the state level. And 40 of these state laws declare drivers with such companies to be independent contractors, thereby exempting companies from a wide range of labor regulations such as those requiring minimum wage, overtime or worker’s compensation. Uber’s lobbyist is moving bills in eight states to strip all “gig economy” workers of the protections that come with being an employee.

The map confirms significant corporate capture of state legislatures. Plenty of analysis has uncovered the overwhelming spending by business interests on state legislative candidates and lobbying of state legislators. The fact that 28 states now prohibit local minimum wage standards and 27 states ban local rent control measures speaks to the effectiveness of this strategy. Recent research by our organization and the National Employment Law Project highlights Uber, Lyft and others’ aggressive lobbying and unprecedented spending to influence state legislators, which led, as noted, to 41 states adopting policies that preempt any local attempt at regulation.

The map also reminds us of the systems of oppression present in our politics: overwhelmingly white, male state legislatures are readily adopting laws that harm women and people of color the most.

According to the most recent data from the National Conference of State Legislatures, state legislatures are, taken together, an astounding 76 percent male and 75 percent white. The two states on our map that preempted local authority on nearly every issue we tracked, Tennessee and Indiana, have legislatures that are almost entirely white and male.

Sometimes this race and gender dynamic shows itself plainly, as with the legislatures that have gutted the ability of local jurisdictions to protect immigrant communities from abrupt detainment and deportation, or to encourage equity in hiring for publicly-funded jobs. Other times it requires a bit more examination. The Partnership for Working Families has reported on seven overwhelmingly white state legislatures that acted to preserve Jim Crow racial wage gaps when they blocked majority African American cities from raising the minimum wage.

Similarly, when 20 predominantly white, male legislatures took away the ability of localities to require employers to provide earned sick time, their action disproportionately harmed women and people of color, who are overrepresented among low-wage workers and among workers whose jobs bring them into contact with sickness.

Understanding the features of the political landscape must shape how we plan to change it. The corporate capture and systemic racism and sexism that drive state interference today won’t go away because a bill gets voted down or a court hems in the allowable parameters of preemption. Instead, stopping the kind of harmful state interference reflected in these patterns will require people coming together from all across a state to relentlessly organize with neighbors and allies. We hope our map helps make that work even just a little bit easier.