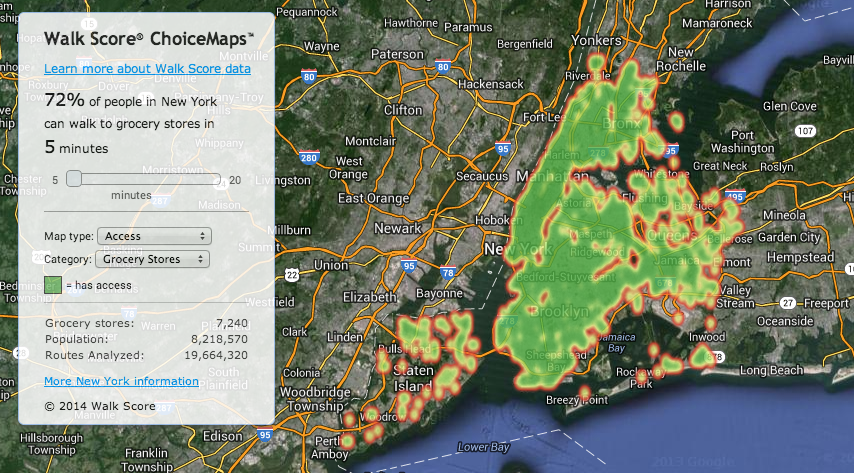 The folks at Walk Score, a web tool that rates cities by walkability and gives real estate agents more ammunition to jack up your rent, have ranked the five best and worst U.S. cities for food access. With public health a growing concern among community activists and lawmakers, and related issues like the existence of food deserts constantly rotating in and out of the urban policy debate, Walk Score has jumped into the game with a new algorithm.

It’s pretty simple: They calculated the percentage of citizens in cities with more than 500,000 people who can walk to a grocery store in five minutes or less. As the chart here shows, New York City unsurprisingly tops the list with four very familiar dense, walkable cities behind it.

And in the bottom five we have a handful of largely car-centric, medium-sized cities.

Walk Score hasn’t released the rankings of the hundreds of cities in between, but it will make the data available for urban planners. While the green in the heat map below shows where you can walk to a grocery store in five minutes or less, it might as well serve as an illustration for the difference between a dense urban area and a thinly-spread metropolis. 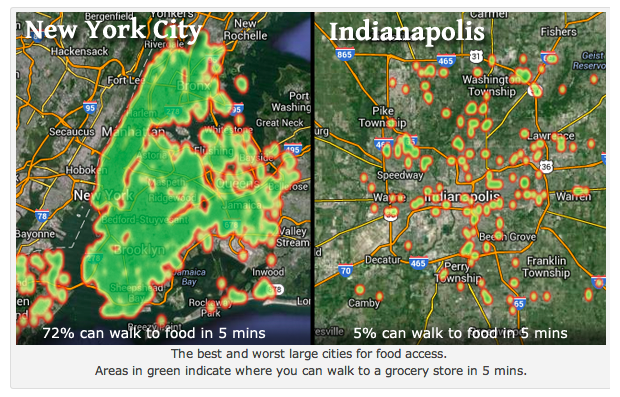 However, a number of variables cast doubt on the map as a completely reliable indicator of a given city’s food access.

For starters, I find it highly unlikely that someone shopping for a family of four in Tucson will walk to the grocery store, even if it’s five minutes away. You must account for rates of car ownership. According to research from The Atlantic, New York City and Washington, D.C. have the highest share of car-free households in the country. People in those cities probably have to walk to the store if they run out of garlic, by mere virtue of the fact that they probably don’t have a car. It’s worthwhile to point out how auto-dominated design and few public transit options affect residents of car-centric cities like Indianapolis — especially with regards to car ownership’s cost burdens on low-income people — but you need to acknowledge that walking to a 7-11 to buy milk will, in some places, earn you more than a few perplexed stares.

Then there’s the issue of what, exactly, constitutes a grocery store. Walk Score’s map for New York City shows the South Bronx colored mostly in green, yet it’s common knowledge that the nation’s poorest Census district is also one that struggles with finding ways to stock its bodegas with healthy produce. If we go by Walk Score’s metric, Indianapolis is more of a food desert than, say, most of the Bronx or Detroit. I think many people in Mott Haven and on Detroit’s east side would argue with that.

My biggest fear is that Walk Score has glossed over some important data here, and conflated convenience with actual access to healthy foods.

Finally, we have the five-minute metric. I live in Crown Heights, Brooklyn — a dense neighborhood with more than its fair share of bodegas and supermarkets — and I walk 10 minutes to get to the store, which feels totally reasonable. Should I adjust my expectations? Let me know in the comments. How far do you walk to the store, if at all?